In the years I was a financial journalist, it always surprised me how reluctant many of us are to invest outside our country’s borders.

But with the U.S. stock market at all-time highs — and at stretched value levels not seen since 1929 and 1999 — there’s never been a more important time to diversify your profits from stocks outside America’s borders.

I’ve been a bull on European stocks since April last year, when I called it the “economic Cinderella story of 2017.” I bet that the region’s consumers, as well as its troubled banking sector, would surely benefit from an upturn in confidence and eventually higher interest rates too.

Looks like I was right. Recent data from the European Union shows economic confidence across the euro zone hit its highest level in 17 years.

And when the EU reports its quarterly and annual gross domestic product later this month, the euro zone may well have grown even faster than the U.S. during 2017. An analytics firm called Capital Economics predicts the euro zone grew by 2.4% last year, compared to a U.S. forecast of 2.3%.

But while the U.S. is already on the road toward higher interest rates — a boon for bankers, credit card companies and savers everywhere — Europe is still fumbling to get its map out of the glove compartment.

Europe’s Economy Is on a Tear

The European Central Bank (ECB) said in December it would keep the euro zone’s interest rates at essentially zero.

The ECB’s president isn’t exactly a hawk on monetary policy. But we’re already seeing plenty of hints that the ECB may start signaling a change in its inflation stance from, let’s say, “more dovish” to “less dovish.”

And since rising rates make a currency more attractive to hold, the news was enough to strengthen the euro to its highest level versus the dollar in four years.

The point is, Europe’s economy is on a tear.

We’ve certainly seen the effects in our Total Wealth Insider portfolio, where one of our banking stocks geared to Europe is up nearly 40%.

And I still like the prospects for Europe-focused exchange-traded funds (ETFs), especially those geared toward the financial sector, like the iShares MSCI European Financial Sector ETF (Nasdaq: EUFN), which I recommended on this page in August. Since then, it’s up 10% and has more to go. 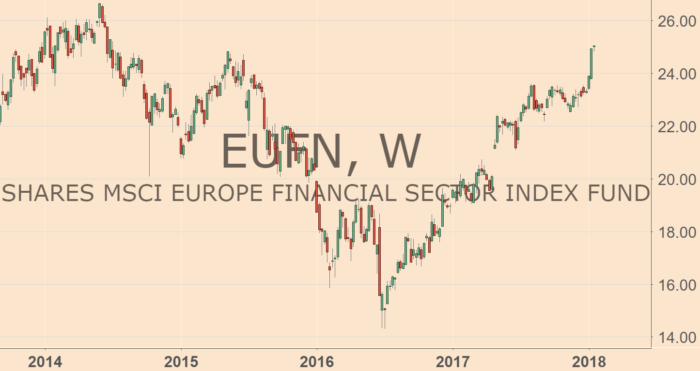 The same can be said for the Vanguard FTSE Europe ETF (NYSE: VGK), which I recommended here back in October last year. It’s up more than 7%.

European stocks also remain a place to find a better value compared to the U.S.

They found a curious fact: Out of the world’s four major advanced economies, Europe remains the cheapest market to invest in. The U.S. market remains the most expensive.

Lastly, we are nearly a decade into a full-on runaway bull market. I believe we could see a large sell-off starting in the market any day now as investors finally cash in profits from the past year. It will scare a lot of people, no doubt.

Europe’s cheaper stock markets are a great place to “hide out” when that sell-off finally gets underway.

This Sluggish Sector Is Ready to Rally