I have a dear friend who is a magician.

I’ve been lucky enough to attend one of his stage shows where he’s escaped straitjackets, swallowed needles and hidden half of a $10 bill in a lemon. He’s amazing to watch.

But while all these flashy tricks are stunning, my favorites are still his sleight-of-hand tricks.

Sitting around my house, I’ll hand over a new deck of cards or a coin and just watch him work. Telling stories or jokes, he keeps us distracted while his fingers are a blur of action as he shuffles, cuts and pulls out cards … as if by magic.

While this distraction is harmless and fun, we are faced with a big problem that is threatening to sink our economy, and it’s crucial that we take action now.

America has a debt problem. That’s not really a surprise. It seems everyone is quite aware that the federal government is nearly $20 trillion in debt, and, sadly, we’ve become numb to that information.

We don’t seem to have noticed that the country is also struggling with a mountain of debt at the state level.

Earlier this month, Moody’s Investors Service and S&P Global Ratings downgraded Illinois’ debt rating to just one step above junk — the lowest debt rating for any U.S. state on record. And S&P warned that if the state doesn’t come up with a solution to lower its debt by July 1, it could be downgraded again.

Illinois continues to struggle with its budget, and there is currently no end in sight. The fifth most-populous state in the union has more than $14.5 billion in unpaid bills, and on June 30, it will owe $800 million in just interest and fees on its unpaid debt.

But one of the biggest culprits of its debt problem is its underfunded pension system … and the state of Illinois isn’t alone.

In May, Connecticut saw its bond rating downgraded from Aa3 to A1 after both Fitch and S&P Global downgraded the state’s bonds due to falling state income tax receipts, a drop in its budget reserves and its underfunded pension plans.

In March, New Jersey’s debt suffered its 11th downgrade since 2010 due to its growing pension debt and low cash reserves.

Earlier this year, the Pew Charitable Trusts revealed that for 2015 (the most recent year for data available), we had a $1.1 trillion pension gap. This is a 17% increase from 2014. In addition, the percentage of funded pensions dropped to 72% from 75% in 2014. 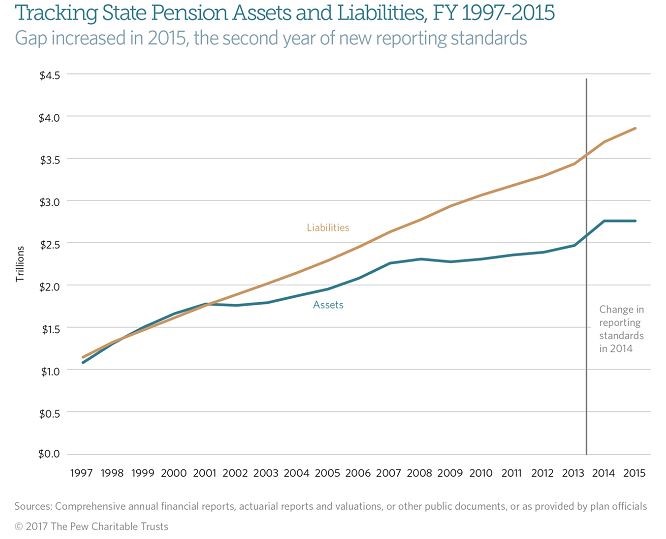 Weak investment returns are largely to blame for this pension shortfall. When the pension plans were created, they assumed a long-run return of 7.6% each year. In 2015, the median overall return was 3.6% — less than half the expected return!

For 2015, the following states had under 60% of their pension programs funded: 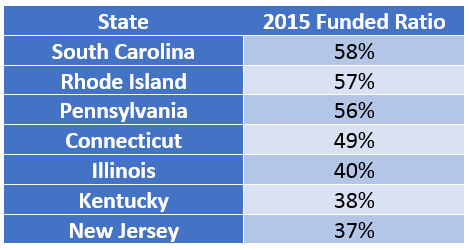 With more and more states struggling under the growing weight of their underfunded pensions, we are inching closer to a crisis. State governments are left with the choice of either revising their pension plans so that they pay out less benefits, or they are taking money from other state-supported programs to pay into their pensions.

While we’ve been distracted by shenanigans in Washington, states have hollowed out the country with their rampant debt and massively underfunded pension programs that will leave us on the brink of collapse.

It’s critical that you take steps now to make sure that your portfolio is properly diversified against the next shock wave to pummel the financial market.