Since the recession, the job market has shifted so much that it’s created an entire new trend in the American workforce. This trend has come to be known as the gig economy.

Basically, workers in the gig economy are people who work job to job. They’re usually an independent contractor or freelancer.

An example of the explosion of this new wave of workers is Freelancer.com. The website has over 25 million jobs available for people who can perform services such as web design, app development and writing. 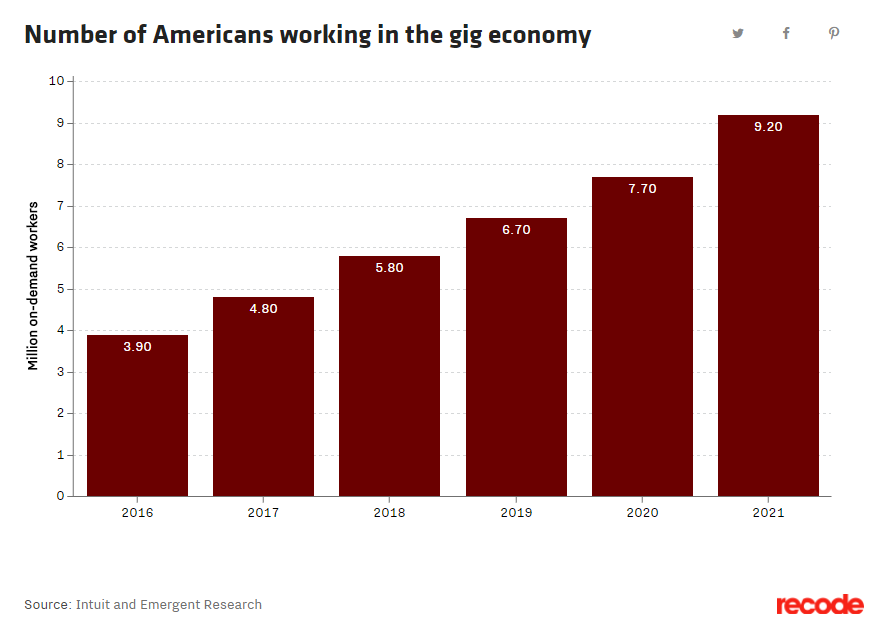 There could be multiple reasons for this job market shift. The most ominous reason would be that people cannot find jobs in the traditional labor market. That means jobs with benefits and fixed pay.

We’ve seen a continued downtrend in the unemployment rate since 2010, from 10% to about 4.5%. But there’s been a lasting effect on the size of the labor force. This number measures the amount of people who are employed or looking for work.

Overall, the labor force has fallen continuously by about 6% since the late ‘90s.

The other reason for the shift could be that people are not able to afford their current lifestyle on the pay from their primary income.

The reason for that is simple. Things have gotten more expensive, while income levels have had little to no change.

In fact, the most recent data, which is from 2015, shows that the median household income in the U.S. is still lower than it was in 1999. That’s even when taking inflation into account.

That’s 16 years of no real growth in income for the general population. It would explain why so many people are looking for a job on the side.

The response by the labor market in the United States to the lagging real wages is something we have never seen before at this level. People are making money any way they can just to cover their cost of living.

Whether it is because of fewer traditional full-time jobs, less income compared to the current price of living, or both, it is evident that the U.S. job market is being shifted by people desperate for work.

Lock in Low Rates Now, Because They Are About to Soar

Home Prices Are About to Make a Big Move