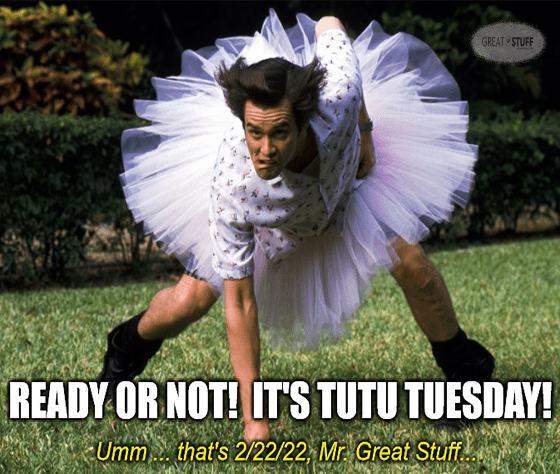 Great Ones, if you’re expecting some big commentary from me on Russia and Ukraine … don’t hold your breath.

The situation is what it is. And from an investing standpoint, it’s just another log on the Wall Street volatility dumpster fire.

If you’ve been paying attention, reading your daily Great Stuff and eating a well-balanced breakfast … y’all should be OK. I mean, I can only offer you so many opportunities to learn how to profit from market volatility … well, so many plus one, it seems:

Paul and his protégé Ian Dyer are up to their old market-beating tricks with Rapid Profit Trader! If you’ve looked at other market volatility trading strategies before and yawned … then you really need to check out this exciting new “Profit Boosting” event!

I’ve even saved you a seat! Just click here to find out more!

Anywho, we’re not talking about volatility, Russia, Ukraine or even the Fed today. No sir!

Now, I know some of y’all are a touch salty over AMD, and that’s understandable. The stock is down some 28% since we recommended it in Great Stuff Picks back on January 3. Curse you market volatility!

Remember, we didn’t buy into AMD because of Wall Street. We bought into AMD because of AMD. The company is truly firing on all cylinders right now and is one of two critical semiconductor stocks you should own regardless of what the broader market is doing.

This morning, Bernstein Analyst Stacy Rasgon upgraded AMD from market perform to outperform with a price target of $150 — that’s a 30% upside from AMD’s close on Friday.

Right you are. But Bernstein might as well have been an AMD bear. The last time the ratings firm issued an outperform rating on AMD was about 10 years ago!

Time heals all wounds, and (as has frankly been abundantly clear for years) this is not the AMD of a decade ago. And with the combination of continued stellar execution, increasingly bankable earnings power, and a recent sizeable pullback making valuation (dare we say?) downright attractive we are, for the first time in almost a decade, pulling the trigger.

Did you catch that? That important little tidbit in there about “a recent sizeable pullback?”

That’s right. Even Bernstein recognizes that AMD is undervalued right now, with Rasgon noting that AMD “looks even better on a revenue basis.”

And Rasgon believes, as I do, that AMD’s revenue gains are going to come at the expense of Intel’s (Nasdaq: INTC) restructuring and manufacturing woes:

Intel’s recent commentary at their analyst day last week suggests the next several years may be open season in datacenter.

We suspect AMD will take as much share as they can manage to supply.

The bottom line here is that if you haven’t already taken my recommendation to buy AMD stock, now is your chance to buy in at a bargain price … before AMD skyrockets later this year.

Good: Donut Give Up — Donut Surrender

Mmmm … smell that, Great Ones? The sweet scent of slightly burnt sugar, day-old coffee percolating in a piping-hot pot … and the metallic tang of money changing hands early in the morning.

And now I’m hungry, thanks.

The King of Kreme himself, CEO Mike Tattersfield, credited holiday demand for the company’s strong sales growth, saying: “Our brand doesn’t tend to be a daily ritual. It tends to be a gathering.”

Sure, Mike. Sure. Gathering gaffes aside, it wasn’t all sweet treats for DNUT investors on the Street.

The donut designer still came in a penny — yes, a whole penny — under Wall Street’s earnings estimates for $0.09 per share. But considering that not just any neighborhood bakeshop can make desserts that’ll delight your taste buds like Krispy Kreme … DNUT investors weren’t about to bite the sugary hand that feeds them.

As such, DNUT stock is surging over 7% today on its modest quarterly win. 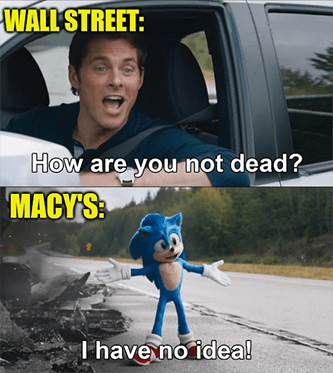 Mall retail somehow still isn’t dead yet — and neither is the debutant of department store fare, Macy’s (NYSE: M).

Don’t get me wrong: Macy’s still isn’t bringing in the mega billions like its Amazonian cousins *nudge nudge, wink wink*.

But it is bringing in the minuscule billions … and that in itself is something to write home about.

For the quarter, Macy’s made $8.67 billion compared with the $8.47 billion expected. Topping it off, adjusted per-share earnings hit $2.45, which blew the Street’s $2 per share profit out of the water.

To reiterate: That’s a double beat from a near-dead business. Has anyone checked outside to see if pigs are flying around? What kinda wingspan do you think those suckers would need to get off the ground?

Right. More importantly, Macy’s also authorized a $2 billion share buyback program, a 5% dividend increase and said that it won’t be separating its digital and physical store segments despite pressure from activist investors to cut the cord.

Now, normally I would side with the activist investors when it comes to retail revitalization — and doubly so for dinosaur department stores.

But considering today’s surprise double beat, maybe … just maybe … Macy’s is doing something right all on its own. What do you think, Great Ones? When was the last time you shopped at Macy’s … or any mall, for that matter? 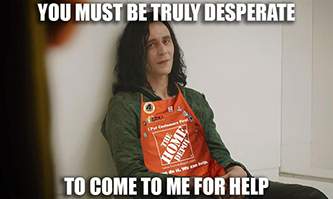 To say that Home Depot demolished its latest quarter would be an understatement — it completely nailed it. Fourth-quarter net earnings reached $3.4 billion on sales of $35.7 billion, with earnings per share hitting a healthy $3.21.

Meanwhile, same-store sales — a key metric that basically measures how well existing stores have been operating — jumped 8.1% over the last three months.

And let’s not leave out the 15% dividend increase that Home Depot just announced, which will push its quarterly dividend to $1.90 per share. That’s an HD stockholder incentive that would make Tool Time Taylor weep.

And yet … Home Depot stock is slipping nearly 9% lower on the day. What gives?

Well, it would seem analysts are concerned that much of Home Depot’s growth was driven by higher prices as a result of inflation … and not a sudden uptick in home improvement projects, new housing construction or the easing of supply chain constrictions.

To the window, to the wall, Great Ones. Analysts still think HD will get low.

Broad uncertainty is the name of this year’s game … and until the Street finds its future-looking confidence once again, companies like Home Depot will continue to be caught in the crossfire — no matter how much money they make.

While 2022 is shaping up to be a tough time for stocks, my colleague Clint Lee has been devising a plan of attack that can make volatility work for investors. (Hint: This is your second volatility play today … lucky you!)

The good news is, Clint has been given the green light to reopen Flashpoint Fortunes to new members for a limited time.

To see how his service works — and how to make volatility work for your portfolio — click here now.

Your email might even be featured in this week’s edition of Reader Feedback! We’d love to hear from you. In the meantime, here’s where else you can find us: 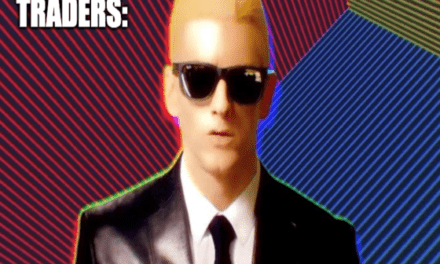 Will The Real Earnings Traders Please Stand Up? 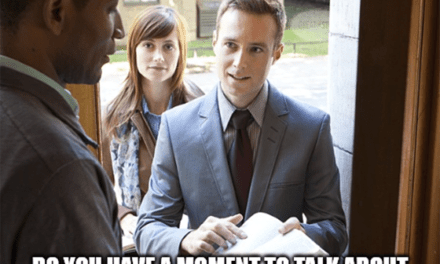 The $1 Trillion Question? Hydrogen. The Answer Is Hydrogen