Astro’s Stairway to Heaven, Cal-Maine Cracks Up & Woah There Warby 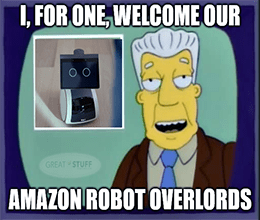 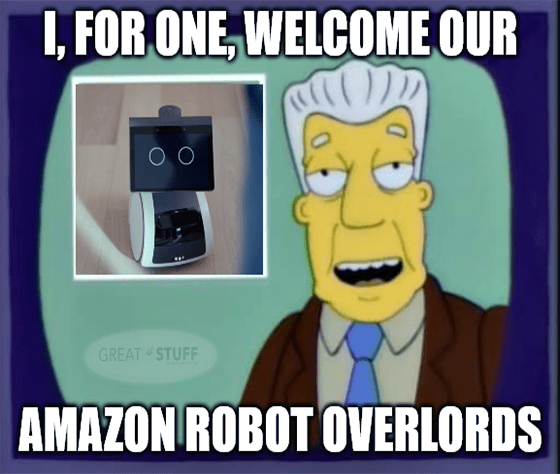 What falls down stairs (alone or in pairs), rolls over your family’s dog? What sees you as a snack? Better watch your back! It’s Amazon’s Astro!

Great Ones, did you catch Amazon.com’s (Nasdaq: AMZN) gadget-fest yesterday? It was packed full of electronic odds and ends, updates and new products. That said, if it wasn’t for the laughable yet oddly fear-inducing Astro personal home robot … it would’ve been about as dry as an iPhone reveal event.

What’s Astro, you ask? We’ll get to that in a minute. Let’s get the boring stuff out of the way first.

So, Amazon released a virtual ton of new updates and products yesterday, including updates to the Ring home security system and the Echo Alexa-enabled home touchscreens, a new Blink video doorbell and a new Amazon Smart Thermostat.

Only slightly more exciting were the new Amazon Glow, a new kid-friendly video conferencing device; the Halo View, a new fitness tracker with a video subscription for studio-quality workouts and a new Alexa upgrade called “Hey, Disney!,” which allows you to interact with Disney, Pixar and Star Wars characters.

Just … don’t let your younglings talk to Anakin unsupervised. You know, for reasons…

Amazon’s Astro is an Alexa-enabled home robot. If you’re tired of carrying around your Alexa-enabled smart device or don’t like trying to find your Echo to ask Alexa something … Astro is most certainly for you.

This little robot is about the size of a small dog, has a cutesy display screen for a face and follows you around like a creepy little automaton. In other words, Amazon no longer has to strain its “ears” to hear you in the other room … it can just follow you there.

Really? Then I guess you wouldn’t be interested in leaked documents from Astro developers … hmmm?

What could the developers possibly say? How about that Astro is a “disaster that’s not ready for release?” Or “absurdist nonsense.” Or “terrible.”

One developer even called Astro’s data-collection habits “a privacy nightmare.” The documents also show that Astro does a lot of facial recognition surveillance. Like a lot.

Astro uses facial recognition to identify not only family members but anyone who enters your house. In fact, according to Astro’s developers, the robot will doggedly follow people it doesn’t recognize so it can add them to its database.

Amazon’s Astro has iRobot written all over it. Or maybe HAL 9000: 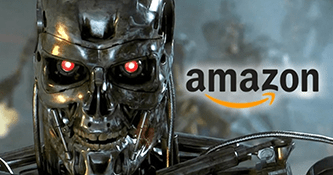 Luckily for you — and Sarah Connor — Astro has a critical weakness. No, it’s not an exhaust port the size of a womp rat.

According to the leaked Amazon developer documents, Astro apparently will not hesitate to “throw itself down” a set of stairs “if presented the opportunity.” Sounds like Astro is a bit suicidal, if you ask me.

For the time being, though, it’s nice to know that the robot apocalypse can be averted with stairs … at least until Astro hooks up with its cousins over at Boston Dynamics and learns how to parkour.

Oh, you probably want me to drop some investing knowledge on Amazon while we’re here. Astro is a nonstarter for investors, but the rest of the products announced are nice creature comforts that could boost Amazon device sales — though not enough to really make a big difference in AMZN’s stock price.

All in all, gadget day was entertaining but a bit of a letdown on the investing front. So … here’s something 20% cooler for you to look into: 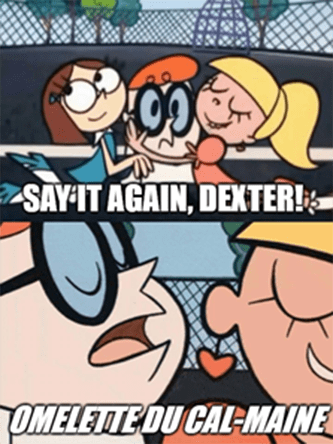 Omelet you finish, but egg producer Cal-Maine Foods (Nasdaq: CALM) had the best earnings report of the week. Well, Cal-Maine doesn’t make eggs; it has the hens that produce the eggs, and then — well, you get the gist.

In the land of inflated egg prices, Cal-Maine sits atop an eggshell-colored gold mine. Forget the walrus — Cal-Maine literally is The Eggman.

Higher egg prices last quarter helped Cal-Maine twofold: Revenue ticked up 13% year over year to $331.7 million, while earnings per share came in at a loss of only $0.37. That’s three cents better year over year — and CALM investors were absolutely eggs-hilarated!

Let’s be real, though: It’s a sad day when egg inflation is the only positive lifting the stock higher… 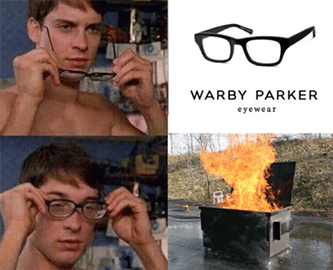 Robot spies, egg-spensive yolks and designer glasses — if today’s stock lineup isn’t a well-diversified and balanced breakfast, I don’t know what is.

E-commerce eyewear expert Warby Parker (NYSE: WRBY) had its direct listing today, debuting at $40 a share and immediately falling as low as $24.53 at the open. But doesn’t Warby Parker just sell glasses online … what is there to mess up?

Quite a lot, actually: We had raised some profitability concerns about Warby getting too uppity with opening new brick-and-mortar locations … during a pandemic.

Wall Street analysts are now crying out about Warby’s obscene valuation. Even Jim Cramer — remember that dude? — declared the stock dead on arrival unless Warby Parker starts to actually make a dent in the glasses-buying market.

You gather that laundry list of negativity … and then throw Warby Parker’s debut into a week rife with growth stock slaughter? That’s just not nice. It’s no wonder WRBY dropped 38% almost as fast as you lose sunglasses over the side of a cruise ship.

I’ll give them some credit — Netflix’s (Nasdaq: NFLX) determination to dominate your TV screen knows no bounds. I thought Netflix was joking about becoming a game company — sorry, an “interactive experience” developer — but unfortunately, here we are.

Netflix just bought its first game studio, snatching up Oxenfree maker Night School Studio. I mean, you didn’t think Netflix would make all those interactive experiences alone, did you? Puh-lease…

It’s clear that, to get off the ground at least, Netflix is choosing the “buy to compete” model that Big Tech’s laid out … and I’m wondering just when the streamer will start to draw some antitrust attention of its own.

Buying one game studio might not be a big deal … but Netflix needs more than just a few Stranger Things games to stand out as a gamemaker, and I could see it getting ravenous for both film and gaming content. 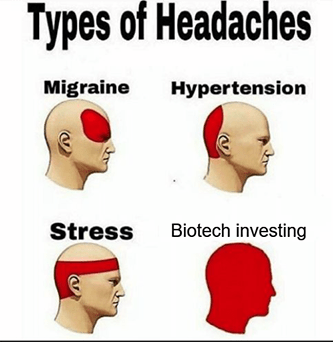 AbbVie (NYSE: ABBV) ticked up 1% today after the FDA approved its migraine-preventative drug Qulipta, which is a relief, because usually these clinical test results just give me a migraine headache. (Sinking down to your level!)

No more sweating bullets, ABBV investors … but y’all weren’t too worried about this drug getting approved, right?

When it comes to pharma stocks, AbbVie is Big Pharma. And unlike tiny biotech stocks that literally put all their Cal-Maine eggs in one basket with one drug … like Forte Biosciences, for instance … Qulipta is AbbVie’s third migraine drug among its already filled arsenal of on-the-market drugs.

Migraine meds are a crowded market anyway, but analysts think Qulipta could bring AbbVie $640 million in sales by 2025. And who can’t use an extra $640 million?

It’s poll time! Polls … we do those on Wednesdays, remember?

I know, we took Wednesday off last week to tell you all about Adam O’Dell’s Wednesday Windfalls — which closes for new signups tomorrow, hint hint — so let’s go over our previous poll results from two weeks back.

For those of you who forgot, we asked you if COVID-19 affected your travel plans and willingness to take commercial flights. (Not everyone has a private plane, Ken — don’t think I didn’t see your email.)

29.4% of you said nothing would keep you from reaching your Final Destination (fate and COVID notwithstanding), while another 29.4% of you wanted to cancel all your flight reservations and ask the airline to cut you a travel voucher.

Just pay attention to the expiration date if you go this route — most vouchers are only redeemable up to one year after your canceled trip, and no amount of begging or bribery will move the stone hearts of those airline customer service reps.

Moving on, 21.2% of Great Ones were worried about flying because of COVID-19 but were ultimately willing to take the risk. Best of luck to you lot!

And finally, I appreciate the remaining 20% of you who said flying’s for the birds — you prefer to keep ground-level anyway. Frankly, I get it … if you’re going to have a panic attack, best not to do it 35,000 feet up in the air.

Now, judging by how many of you ranted and raved over Elon’s oh-so-creative “Tesla Bot,” I’m willing to bet y’all have strong opinions about Amazon’s new free-roaming robot, Astro.

Why not channel those thoughts into something constructive and participate in this week’s poll?

Inquiring minds want to know: Would you drop 10 Benjamins on Amazon’s Astro robot? Or are you, like me, worried about the privacy nightmare this insentient sentry poses?

And if you don’t see an answer you like, make up one of your own and email us at GreatStuffToday@BanyanHill.com.

Great Stuff is your one-stop shop for ranting, raving and a whole lotta rambling too. We love it all, so write to us now! 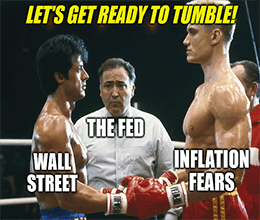 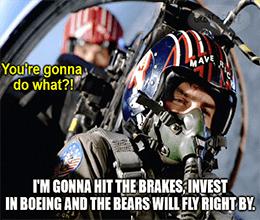