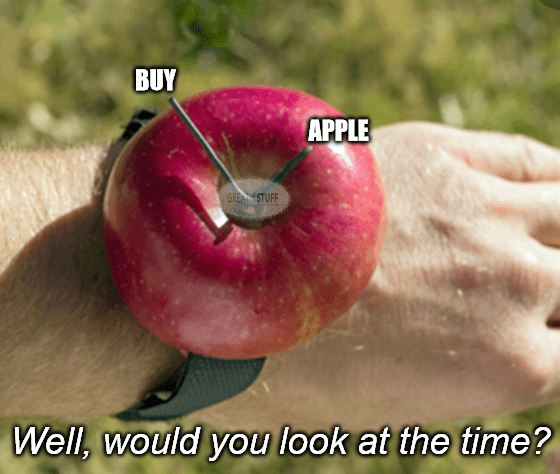 These Apples Are Delicious?

As a matter of fact, they are, Great Ones.

Can all this fruit be free?

Unfortunately, no. Apple (Nasdaq: AAPL) is not free. But AAPL stock is down about 20% so far this year, so we’ve got that going for us … which is nice? Well, for bargain hunters at least.

But many on Wall Street don’t see it that way, especially after yesterday’s news that Apple told suppliers to cut back on iPhone 14 production by 6 million units. Of course, that’s if you believe “the people” who leaked the news.

Were they “familiar with the matter”? Who knows? It’s just “the people.”

I believe that when I buy a phone, a computer or a tablet that I should be able to install what I want on it and be able to repair said device myself. None of this applies to Apple products. Like, at all.

It’s a shame, really, because my first PC was an Apple IIc, and my first digital music player was an iPod. I loved both of them … until Apple got all weird with its software compatibility with Windows, that is.

Nah. Not more than Sally!

Today, however, Wamsi Mohan, an analyst at Bank of America Global Research, said he believes that Apple customers are going to love Apple a little less in the coming months. Wamsi cut his price target on AAPL stock to $160 from $185. He also downgraded AAPL to Neutral from Buy.

Well, it has to do with those darn “people” again. Wamsi believes that Apple is headed toward a “weaker iPhone 14 cycle,” a development hinted at in yesterday’s iPhone production cut leak:

Apple shares have outperformed significantly this year and have been perceived as a relative safe haven. However, we see risk to this outperformance over the next year … driven by weaker consumer demand.

Let’s be honest here. This is more of a U.S. recession problem than a “people aren’t going to buy iPhone 14s” problem. It’s not that people don’t want to buy the new Apple iPhone. It’s that they can’t afford to buy one. 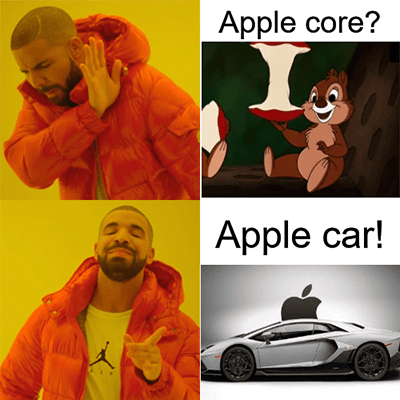 So while Wamsi is probably right about risks “to outperformance over the next year,” this isn’t a negative for Apple’s business model.

In fact, Apple will likely hold up better than most of its competitors during the same period. And that’s all due to the amazing loyalty of Apple customers.

And, no, I’m not on Tinder. I’m happily married, thank you very much, but I do enjoy reading schadenfreude … it is the best freude, after all.

Now, I know I’m not selling the bullish case for AAPL stock very well at all. Like I said, I’m not an Apple guy. But, as usual, I happen to know a guy…

My colleague Ian King is a diehard Apple “fanboy.” He’s the kinda guy that went straight from BlackBerry to Apple … well, eventually:

If you want a real bull case study on why you should probably buy AAPL stock even while the market is downgrading the shares, you need to read this article now: “Why Apple Cars Could Top Tesla EVs.”

Want more proof as to why you should check out Ian’s latest article? Well, try this on for size:

What makes this statement both hilarious and disturbing at the same time is that it is true! And the mass exodus of Tesla drivers switching to Apple Cars will likely happen just as Ian says it will.

Oops … I hope I didn’t give away too much! Check out “Why Apple Cars Could Top Tesla EVs” now before I give it all away!

And Now For Something Completely Different!

For the first time ever, Charles is going to reveal why he’s putting his own money in a group of investments he calls … Super Stocks.

Super, because you can invest in them before Wall Street, giving you the chance to flip the script and stack the odds in your favor.

Super, because they’ve trounced the market 6-to-1 … not just for the last 10 years or even 20 years … but for close to a century.

Going: The Opposite of RAD 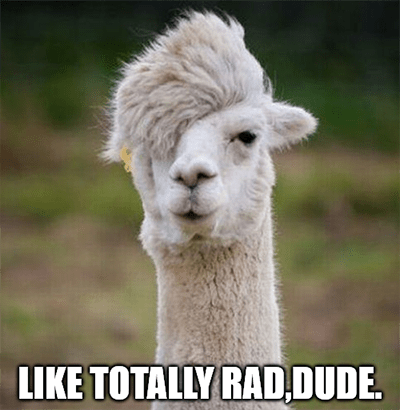 But Rite Aid (NYSE: RAD) clearly did not. In fact, the company’s trip to the earnings confessional this morning was clearly as far from “rad!” as you can get.

That was such an awkward transition, Mr. Great Stuff.

Anyway, Rite Aid said it lost $331.3 million in Q2, which translates into an adjusted loss of $0.63 per share. Revenue, meanwhile, dropped to $5.9 billion from $6.11 billion last year. As you would expect, Wall Street had its Q2 targets much higher.

But the totally not rad part was when Rite Aid backed its fiscal 2023 revenue guidance but slashed its earnings forecast. Like, Rite Aid now anticipates a full year loss of $520.3 million to $477.3 million.

RAD stock plummeted more than 24% on the news. 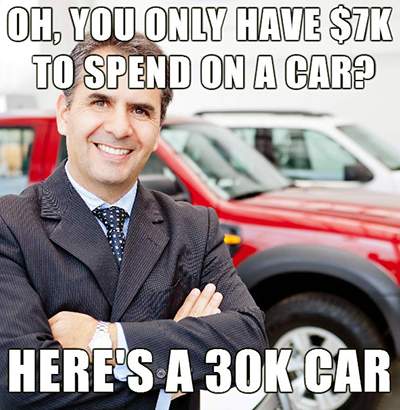 Gripping the wheel, his knuckles went white with desire. The wheels of his Mustang exploding on the highway like a slug from a forty-four…

Y’all this is not black sunshine … this is CarMax (NYSE: KMX). And the only “exploding” going on is with KMX stock … which is more imploding than exploding.

In fact, KMX stock opened at a two-year low in the wake of the company’s Q2 report.

CarMax whiffed on earnings, passed on revenue and generally ran out of gas before it got anywhere close to Wall Street’s guidance expectations.

Here are the numbers if you’re curious:

I mean, we all know why used car sales are tanking. It’s the economy, stupid. But let’s hear what CarMax has to say about this messed up incident:

We believe a number of macroeconomic factors impacted our second-quarter unit sales performance, such as vehicle affordability challenges that stem from widespread inflationary pressures, as well as climbing interest rates and low consumer confidence.

So we have inflation (check), recession (check) and panicked consumers (check). Looks like the gang’s all here. Well … except for “supply chain issues.” But you’re probably not going to hear that from CarMax, since, you know, used cars are everywhere right now.

In the end, KMX stock plummeted more than 23%, which, honestly, is a rather big overreaction. People need cars, even in a recession. And in said recession, used cars are gonna sell better than new ones.

I fully expect KMX to rebound from this grossly oversold position … just don’t expect a massive jump. Sure, used cars are gonna sell better next year, but that’s “better” as compared to more expensive new cars.

Gone: The Not-So-Great Beyond 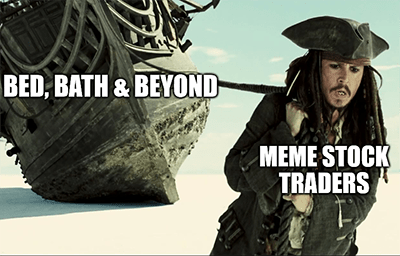 Great Ones, we just talked about two companies that offered up rather poor quarterly reports. Both stocks plunged more than 20% on the news.

So you’d expect that a company that issues an even worse quarterly report would fall even further … right?

Ha. This is Wall Street, where apparently good is bad and bad is bad, but really bad is good?

I don’t make the rules.

Bed, Bath & Beyond (Nasdaq: BBBY) just reported that its Q2 sales cratered 28%. That it lost $3.22 per share. That same-store sales fell 26%. And that it’s having trouble with vendors heading into the holiday shopping season.

You don’t get much more “gone” than that. I mean, interim CEO Sue Gove’s go-to move to inspire confidence in the company was that Bed Bath’s loyalty program hit 6.4 million members.

Umm … this isn’t a streaming service, Gove. Retail doesn’t work like that.

But instead of falling off the face of the earth like RAD and KMX, BBBY stock only stumbled 4.5%. In fact, the shares were actually trading higher in premarket action before any semblance of rationality set in on the open.

These meme stocks, I tell you … can’t live with them, can’t take them out back and put them out of their misery. Needless to say, y’all probably want to avoid this hot mess until Bed Bath figures out what’s beyond this aggressive restructuring plan. 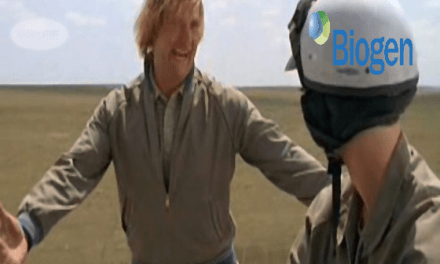 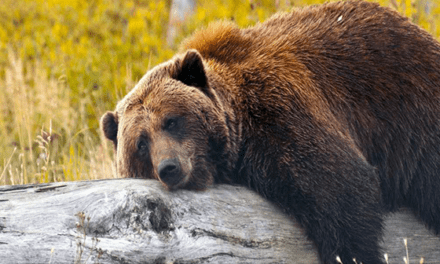