I’d heard that refrain often enough as we launched our canoes into the Little Miami River in Ohio, but I still worried. By nature, I’m the overprotective type, and it was my little brother seated in front of me in my canoe.

A “little rain” could make a big difference.

Every year, a group of friends and I would head about an hour north of Cincinnati on a daylong canoeing excursion along the Little Miami River. During the early summer, the river could be a lightly babbling stream, where we’d occasionally have to carry our canoe through a few of the drier areas, or it could be a rushing torrent — all of it determined by the amount of rain we’d had recently.

This time, the Little Miami River was swollen in its banks but seemed quite manageable. My brother and I had canoed a few times before and had a good sense of balance and rhythm. We also had a plan if we suddenly overturned, which seemed unlikely.

Yet, one quick bend in the river and we were both suddenly popping above the water’s surface, our overturned canoe heading down the river without us. And as we planned, my brother hit the nearest shore, while I chased after our runaway supplies.

Right now, too many Americans are not prepared for a “little rain” in their life, and the potential downpour that we are facing could have a huge impact on whether you can easily ride out that next bend in the river or if you’ll find yourself struggling to get back to shore…

We are a nation of consumers. We love new things, new gadgets and new experiences. The American consumer is responsible for an estimated two-thirds of our gross domestic product. We largely stay afloat because Americans like to spend.

The New York Fed has predicted that total household debt will reach the previous peak of $12.68 trillion this year. We originally hit that high in the third quarter of 2008.

In fact, a survey by CreditCards.com revealed that Americans are increasingly relying on their credit cards for smaller, everyday purchases. Roughly 17% of survey respondents reported that they used credit cards to pay for items costing less than $5 in brick-and-mortar stores, compared to 11% a year ago.

But despite the fact that the unemployment rate has dropped to a paltry 4.5% — a 10-year low — and wages have grown by 2.7% on an annualized basis, Americans are still struggling to get by.

A survey conducted by HomeServe USA, a home repair service, showed that 19% of Americans have not set aside any money for an emergency, while 31% of Americans don’t have $500 set aside for an unexpected expense.

In a separate survey, the AP-NORC Center for Public Affairs Research revealed that most people earning under $100,000 per year would struggle covering an emergency expense of $1,000. 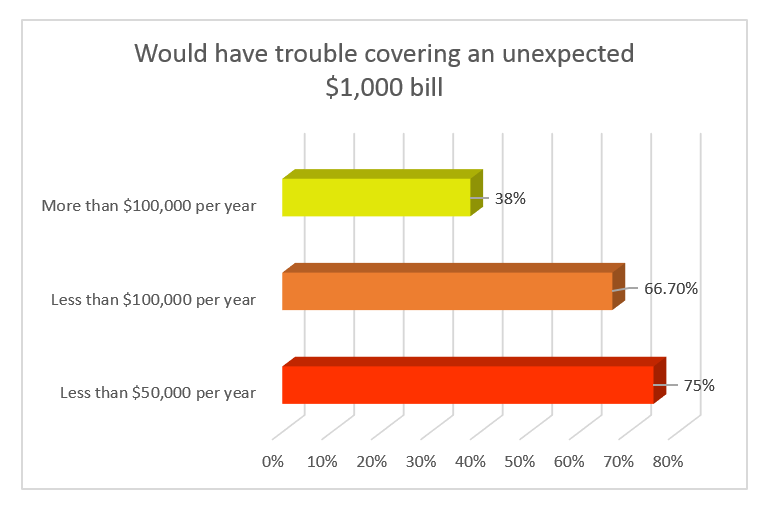 Meanwhile, 49% of employees are “concerned, anxious or fearful about their current financial well-being,” according to a MetLife survey.

Surfing the Next Wave

Many Americans have found ways to keep treading water. Whether it’s paying minimums on their debt or the so-called “borrowing from Peter to pay Paul” technique, they are keeping their heads above water, but it’s always with the feeling that one big wave could sink them.

And you can’t just hope that the wave will never come.

It always does. The next black swan event is already on the horizon and approaching quickly. It could come in the form of further health care disarray and increased costs. Or maybe massive budget cuts that reduce the support that many were depending on. Or maybe it’s a new spike in unemployment thanks to more companies shifting to automation.

Or maybe the U.S. stumbles under the weight of our national debt, which has grown to more than $19.8 trillion.

The fact is that too many are unprepared for the next shock wave to hit the country, creating a dangerous situation that could put the country back into an environment like the Great Recession or even worse.

That’s why it’s important to not only protect your wealth against the next black swan event by using a variety of asset protection strategies, but to also diversify your wealth across a variety of investments.

Have a plan in place now to protect and grow your wealth, and you’ll be able to ride the next wave higher rather than get pulled under.

P.S. My colleague Paul is a Wall Street legend who predicted every stock market crash over the last 25 years, including the 2008 financial crisis. And his latest focus is on an incredible new technology that he predicts will surge into a $19 trillion industry by 2020, turning a few well-positioned tech companies into stock market superstars. Click here to learn more about what Paul’s calling “the biggest tech trend in history.”

Health Care: Your Money or Your Life

Make Your Hurricane Donation Perform Like a Winning Stock Pick