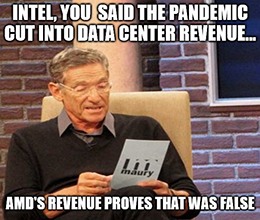 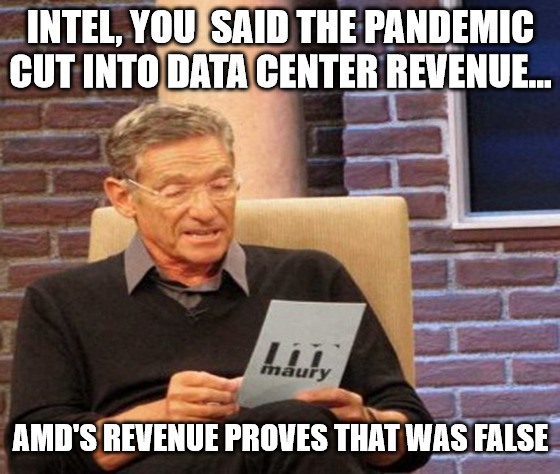 House of the Ryzen Sun

Great Ones, we’re watching an era end in the semiconductor market. A changing of the guard. A capitalist election of the highest order.

No longer does “Intel Inside” rule the roost. Behold AMD’s ascent.

Okay, somebody’s got delusions of grandeur. Too much Death Wish coffee this morning? What gives, Mr. Great Stuff?

I’m glad you asked! Advanced Micro Devices Inc. (Nasdaq: AMD) did two things this morning that all but ensured the company will eat Intel Corp.’s (Nasdaq: INTC) lunch for years to come.

First, the here and now: AMD’s third-quarter report was stellar.

Furthermore, earnings skyrocketed 118% year over year, and revenue soared 56% for the same period. AMD even put fourth-quarter revenue guidance above Wall Street’s expectations at $3 billion, versus estimates for just $2.63 billion.

And now for the icing on the earnings cake: Revenue at AMD’s Enterprise, Embedded and Semi-Custom unit — aka AMD’s data center division — rose a whopping 116% to $1.13 billion.

Can you say “Major blow to Intel?” Sure you can. Remember, Intel reported a 47% year-over-year drop in data center revenue. The company blamed it on COVID-19 and corporations scaling back amid the pandemic.

AMD’s 116% rise in data center revenue stands as proof that companies aren’t all scaling back on data center spending … they just scaled back on Intel.

And it’s about to get much, much worse for Intel.

The second thing AMD did this morning was announce the formal acquisition of Xilinx Inc. (Nasdaq: XLNX) for $35 billion. The price tag has some investors a bit skittish, and AMD shares fell roughly 4% on the news. However…

As I said when this acquisition was still a rumor: “This short-sighted dip is an opportunity for any of you looking for another chance to snap up AMD.”

Specifically, Xilinx is also a budding powerhouse in the data center market.

The company makes programmable processors that specialize in speeding up video processing, data encryption and other specific data center tasks. Xilinx’s technology is a direct compliment to AMD’s already-growing presence in the data center market.

This is a cannonball barrage aimed at Intel’s dominance.

What’s even better is that both Xilinx and AMD use Taiwan Semiconductor Manufacturing Co. Ltd. (NYSE: TSM) for fabrication. The AMD-Xilinx tie-up will create synergies and cost savings here.

I know, right? Also, keep in mind that Intel fabricates all of its own chips, which proved to be a major issue in the past year.

AMD and Xilinx, meanwhile, leave the manufacturing up to TSM, allowing the two companies to focus solely on designing better chips. After AMD’s resurgence in market share and today’s quarterly report, the results stand for themselves.

And for everyone else?

This game is just getting started. Your returns won’t be as good as long-time readers, but you won’t be sorry if you buy today’s dip in AMD.

Yes, even as the world’s uncertainty swirls around us, you better believe there are quick-growing buys to find. And if you don’t believe me, let me rope in the biggest tech bull I know — click here! 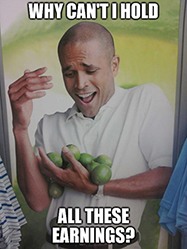 CAT out of the Bag

Our first dip into this week’s earnings foray is a classic case study of this year’s languished expectations limbo: Caterpillar Inc. (NYSE: CAT).

Earnings slid 54% to $1.34 per share, though analysts expected a larger drop to $1.18 per share. Equipment sales fell more than 20% in all four business segments, leading revenue to slide 22% to $9.9 billion.

Still, this beat estimates for $9.8 billion, and just like last quarter’s report, low expectations and high hopes are mostly what CAT has going for it right now.

Though, while the economic bellwether just saw earnings cut in half, a 2% pullback today is nary but a slap on the wrist and a wake-up call for any of you in CAT.

If Caterpillar’s earnings “beat” on rock-bottom expectations counts for nothing … 3M Co.’s (NYSE: MMM) standout sales results should count for something, right?

Well, no. Turns out, 3M’s beat-em-up quarter knocked Wall Street’s socks off, but today’s rut sent the stock down over 2% after a premarket slide.

Sales from its safety and industrial division ticked up 6.9%, but the real action was in 3M’s health care segment. There, sales rose more than 25% to $2.2 billion, while analysts only expected $1.36 billion. We keep talking up “well-run companies” in Great Stuff, and if 3M’s growth sticks, add the stock to your watch list.

Hey, it’s not all about Post-its and unintentional force fields, you know. 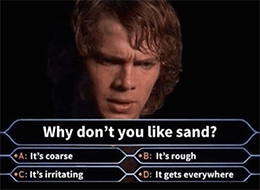 The fear (and possibly loathing) in Las Vegas’s commercial market might be too much for the world’s largest casino company. Or maybe it’s the plummeting revenue, which crapped out an 82% year-over-year decline on the quarter.

Either way, Las Vegas Sands Corp. (NYSE: LVS) now looks to sell its properties on the strip, including the Venetian Resort Las Vegas, the Palazzo and the Sands Expo Convention Center.

Effectively, this would mark the company’s exit from the U.S. casino market altogether, which IGamiX Managing Partner Ben Lee notes is “15% of revenue but 80% of regulatory pain and burden.” Instead, the shifting Sands will focus on its portfolio of properties in Macau and Singapore after its half-billion-dollar loss in last week’s earnings report.

Remember when we talked about dependence last week? And the precarious position that Fastly Inc. (NYSE: FSLY) put itself in by banking on one big revenue-paying customer like TikTok?

Here’s your counterexample on how to conquer the cloud computing market with ease. Twilio Inc. (NYSE: TWLO) just reported blowout earnings of $0.04 for the quarter, besting estimates for a loss of $0.05. Better still, revenue surged 52% year over year to $448 million, crushing expectations.

As more businesses use Twilio’s cloud communications platforms to move their businesses more online, the company continues to diversify its client base, with its top 10 active customer accounts only making up 14% of its total revenue — a 1% improvement on the quarter.

It is interesting if you are a technician, you look at the S&P 500, and it looks like a double top is forming, which is quite dangerous, so I think people are quite concerned not only about who will win, but whether there is going to be a hung election.

Throughout this bull market run, we’ve seen very few bearish technical patterns. Even during the March sell-off, all technical signs pointed toward a rally. It was always economic and political data that pointed toward a downside in stock prices and the market.

OK, class. School is in session!

I brought my pencil! Give me something to write on, man!

Yeah, yeah … and the clock is slow. You don’t feel tardy. Yada yada…

Here’s the Cliff’s Notes version: Fundamental analysis takes financials into account when analyzing stock and asset prices, right? Technical analysis, meanwhile, looks at a stock or asset’s price movements over a period of time to predict where they could go next. Here’s a quick primer.

Technical analysis looks for patterns in these price movements to help predict future movements. I won’t go into all of them — there are waaaay too many, and some of them are quite ridiculous. But, the double top formation that Mobius references has plenty of historic data backing it up.

As with all technical patterns, hindsight is 20/20. In other words, it’s easier to say: “Yeah, that was a double top” once a double top has happened. It’s not so easy to identify one when it’s happening. 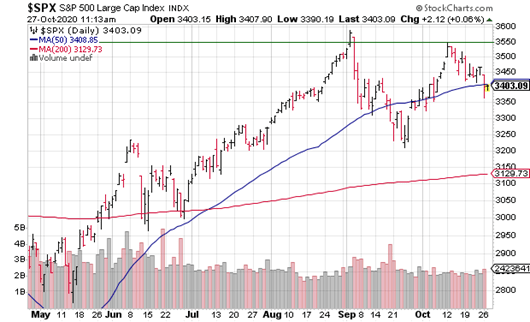 Heading into September, the S&P 500 was in a clear uptrend. There was a decline throughout September and a rebound in October. Next, you can clearly see that the S&P 500 hits two peaks in the 3,550 to 3,600 area (the green line).

This is the potential double top, so we’ve filled that criteria. Next is the question of former support, which you can think of as a price floor where traders support that asset with demand.

Many technical analysts will note that support lies near the S&P’s 50-day moving average (the blue line). There is also price support at 3,350 for the S&P.

But these are short-term levels of support and not tied to the double top pattern. What would really confirm this bearish pattern would be if the S&P breaches support at 3,200 — a 5.6% decline from current levels.

Why? Because that is the low point reached in between the two tops, or peaks, for the S&P 500 — the bottom of the “M” shape forming in the chart above.

Now, a 5.6% drop to breach 3,200 would mean even greater losses and a potential bear market confirmation. This is serious business.

It’s why Mobius couches his language. It looks like a double top is forming. If you read the rest of the article, Mobius says that confirmation of this pattern depends on the November election.

Now, Mobius isn’t quoted in the article on what he believes will happen if President Trump wins a second term. But he does mention his outlook if Joe Biden wins:

If [Biden] decides not to impose tax increases, then that would be good for the markets, so we have to watch what the actual actions are once he gets into office, if he does get into office.

I think we all know what Biden has promised on the campaign trail in regard to taxes. Will this bring about the completion of this double top formation in the market?

Stock and asset prices have been so out of whack this year that it’s hard to say for certain. But, it’s better to be over-prepared for a bear market than not at all, right?

Congrats! You made it through our Tuesday trudge through the land of technicals, and I, for one, need a stiff dose of Reader Feedback to end the day strong. You’ve written in to Great Stuff before, right?

Whether you’re a longtime reader or not, become a first-time writer right here, right now. Send a message to GreatStuffToday@BanyanHill.com with your own individual blend of Greatness.

Market related or out of left field, we get all kinds of rants and hot takes in our inbox. Join in on the fun! We’ll kick off the conversation:

What do you think of this earnings season so far? Are you watching the commercial real estate market like a hawk? Have you ever used technical analysis before? Where do you think the market is headed after the election?

And how about those Dodgers? 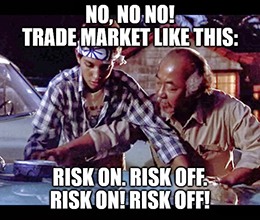 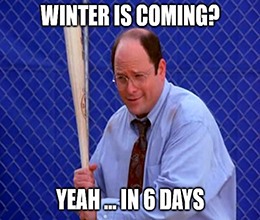