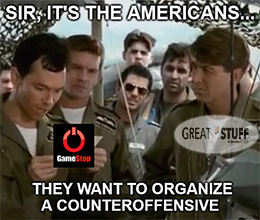 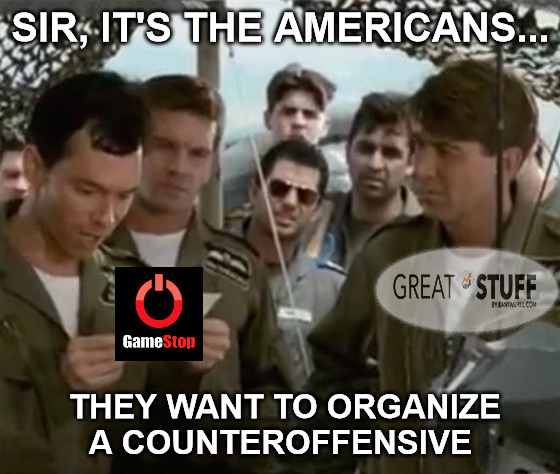 I have to say; I can’t get enough of this GameStop (NYSE: GME) story. The battle between a plucky, completely not-safe-for-work band of retail investors and hedge fund short sellers is quite amusing.

What makes it even more spectacular is that the angst behind the short-squeeze movement is spreading to Europe. According to Reuters: “The best performers in Britain this week have been companies such as Pearson and Cineworld, in which investors also have sizeable short positions.”

Anyone else getting an Independence Day vibe here?

Honestly, I haven’t had this much fun since the Great Stuff  Trade War Cycle chart was a thing. I literally spent most of my morning trying to calculate worthwhile options scenarios to see if there was a way you Great Ones could take advantage of the GameStop situation.

After all, once the WallStreetBets crew on Reddit gets tired of these shenanigans (and they will … eventually), GME’s ensuing crash will be nothing short of spectacular.

Word of advice on that front, though: GME options premiums are priced stupidly high. I don’t recommend them. For example, this morning, the January 2022 $15 put traded with an ask price of $500 per contract!

And, before you rush out and fire up Robinhood: Please don’t do this.

So, how can we take advantage of this newfound retail investor power? For this, we once again turn to Scott Nations of Nations Indexes via Bloomberg Columnist Tracy Alloway:

The old game of shorting a stock then putting out a negative report is done. From now on, that will just be the signal to start a massive short squeeze.

Instead of market oppressors, it seems that short sellers are now viewed as potential opportunities. The larger the short position, the more vulnerable a stock is to GameStop-style pressure. I think you can see where I’m going with this…

Without further ado, here’s a hit list of the most-shorted stocks on Wall Street:

Now, I am not going to tell you which of these stocks to trade … or if you should even trade any of them. The current situation with GME is … um … special. That’s the word. Special.

An entire Reddit message board of 2 million subscribers took aim at GameStop. Their next target could be listed above. It could also just as easily be something completely different.

Short interest can be a very potent contrarian catalyst for a stock — especially if the shorted company surprises everyone with positive news. That said, most stocks are shorted for a reason. All of the companies listed above are there for good reasons.

I’ve said time and time again that GameStop is a dinosaur of a company and that digital games are its meteor. It’ll take years for GameStop to evolve into something more profitable and successful. It’s definitely not worth the nearly $400 per share it traded for today.

And yet … GME did trade that high.

The point is, you can take this information and do with it what you will. Become one of the new Toxic Avengers on Wall Street and target stocks with high short interest. You might make a fortune … you might also lose a fortune.

So, stand up. Be your own “David,” and start targeting “Goliaths” today. Click here to find out how! 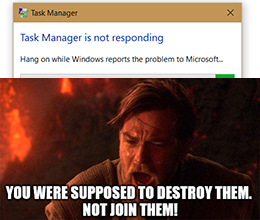 Are you ready to rumble! It’s Big Tech earnings day! Today, we check in with the FAM … or roughly half of the FAANMG.

Yes, I’m including Microsoft (Nasdaq: MSFT). Everyone always forgets Microsoft. No respect for the elders, I tell you.

Facebook (Nasdaq: FB) and Apple (Nasdaq: AAPL) report by the time you’re reading this and good ol’ Softy kicked us off this morning.

As usual — and as predicted on Monday —the real shocker from Microsoft’s earnings report would come from Azure — the company’s cloud business that’s toe-to-toe with Amazon Web Services.

Azure revenues grew 50% on the quarter, but Microsoft doesn’t directly nail down a dollar amount for the segment’s revenue (you’ve got to keep some mystique behind your cloud-based moves, you know).

Where’s the drama when everything’s on the up and up? In a world of GameStop YOLOs, this report was the good kind of boring — the Microsoft kind of boring. 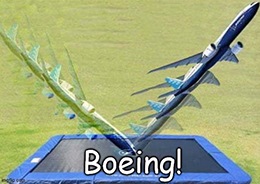 Boeing is today’s “Better” stock? Why I never!

Like everything to do with the aircraft/airline industries last year … Boeing’s (NYSE: BA) fourth-quarter report was a mixed bag of peanuts.

Peanuts … airlines … ha, I get it. It’s still not funny. What else you got?

Sigh, you can’t please everyone…

So, Boeing’s revenue came in at $15.3 billion and crushed expectations. However, earnings were face-masks-falling-from-the-over-head-compartment shocking. Analysts were looking for a loss of $1.80 per share. Boeing did its best seagull impersonation and dumped a loss of $15.25 per share all over Wall Street.

Personally, I think analysts were off the mark to begin with; Boeing was on the hook for MAX-related charges anyway you look at it, sad but true.

The only concerning new charge is $6.5 billion for 777X delays due to the pandemic, which also should’ve been expected. New 777Xs won’t reach airlines until late 2023. So, in short … the BA story is SNAFU.

That’s situation normal, all fueled up — obviously. You bet I’m still long-term bullish on BA, even with the theatrically apocalyptic headlines. In reality, Boeing just got started on its rebound. The 737 MAX was just cleared to fly in Europe, and deliveries for that model started up again last month.

Boeing is the world’s premier airplane maker and a major U.S. defense contractor. U.S. defense isn’t going anywhere, and neither are airplanes. It will rise again, like Mr. Mojo … or Luke’s X-Wing from the Dagobah bogs.

In fact, BA is down more than 50% from its all-time high, and there’s plenty of room for the shares to come back if you’re not already on board — hint, hint.

Best: AMD’s a Hold No More 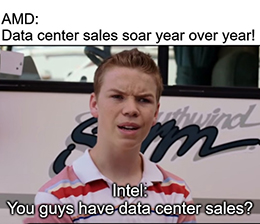 I didn’t want any Great Ones to buy in and get burned ahead of earnings. Turns out, I was right. You’re welcome!

AMD dropped more than 5% today in the wake of a beat-and-raise fourth-quarter report. That’s so 2020, right? Here are the numbers:

Looking ahead, the company put first-quarter revenue estimates between $3.1 billion and $3.3 billion, with full-year sales rising 37% to $13.37 billion. Flat-footed analysts expect a mere $2.72 billion for the first quarter and $12.26 billion for the full year.

So, Great Ones … you know the drill by now: If a company posts a beat-and-raise quarter but sells off in response … we call that an opportunity!

I’m lifting the hold on our Great Stuff Picks AMD position. You are now free to roam around the cabin and begin buying AMD once again.

My, my, so this is what finally divided the nation of Great Ones…

Not new energy. Not crypto. Not even Big Tech’s antitrust issues. It’s streaming, of all things, that splits the ‘Stuff crew right in two.

Last week, we asked you whether or not 2021 is the year when Netflix (Nasdaq: NFLX) gives up the streaming crown that it created. Almost 53% of you think that Netflix will be dethroned by year-end, while roughly 47% think Disney needs more time on the mouse wheel.

By the way, I think Disney+ is destined to be top streaming dog in the next year. Mark my words.

Disney’s franchises give it better staying power, and Netflix knows this. That’s why Big Red brought on new teams to help develop and flesh out franchises, but even CEO Reed Hastings knows that “compared to ‘Harry Potter’ and ‘Star Wars,’ we’ve got a long way to go.”

Now, on the other side of the “digital pivot” coin … GameStop.

That brings us today’s question: Did you get in on the GME action? The retail-led war against the shorts that some now call “Wall Street’s own populist revolt?”

Be honest. This is a no-judgment zone here … for the most part. Some of you have already written in about GME gains you made from nonexistent Great Stuff recommendations (how ya doin’, Mike G.?). So … congrats? I’m proud to be your contrarian indicator!

All that said, I do want to know how many of you out there got bit by the FOMO bug. So, click below and let us know:

Of course, if you’ve got more to say, by all means, write away! Rant and rave as the market muse carries you. Type until your fingers fall off — on second thought, don’t do that. Just drop us a line, won’t you?

GreatStuffToday@BanyanHill.com. Tell us what you think about the latest in Big Tech earnings and the greatest in GME short burning!

We’ll dive headfirst into that inbox in tomorrow’s Reader Feedback, so you have just a few hours left to make this week’s cut. Until then, you can always check out Great Stuff on the web (click here) or follow us on social media: Facebook, Instagram and Twitter. 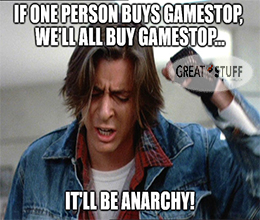 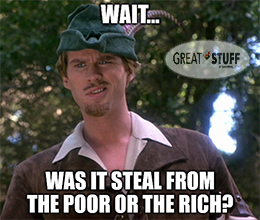