Home » Economy » Traders’ Fear Signals the Next Rally for Stocks

Traders’ Fear Signals the Next Rally for Stocks

Technically, they record the history of prices. But short-term price changes are an emotional reaction to news.

Tesla Inc. (Nasdaq: TSLA) provides an example. When CEO Elon Musk tweeted that he was considering taking the company private, traders reacted with emotion rather than rational analysis.

Rational analysis requires creating a financial statement to see the impact of the deal on the company. With so little detail from Musk, it’s unlikely anyone did that in less than 30 minutes. But the stock jumped more than 7.5% in 30 minutes.

Prices jumped because traders hoped Musk was right. Optimists wanted to believe Musk was right. They wanted the big gain he promised. So they suspended disbelief and bought.

But pessimists soon replaced optimists, and the stock price fell.

Over this time, the fundamentals of Tesla didn’t change. All the price action was based on emotions.

We can measure the strength of the emotion with price charts. That allows us to find price targets on stocks.

Fear in the Stock Market

The chart of the S&P 500 Index shows how this works. 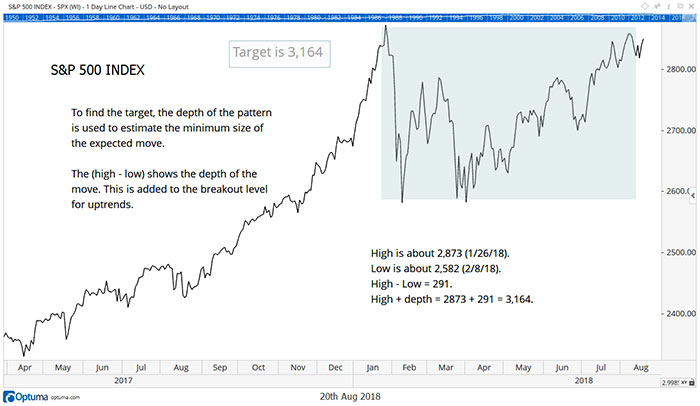 Prices moved almost straight up in 2017. Hopes of tax reform drove the price move. The law passed in December. In January, analysts developed financial models based on the new rates.

Tax reform will increase earnings. But earnings gains won’t be as much as some traders hoped. Fear set in as traders worried that stock prices were now too high.

After reaching an all-time high in January, the index fell quickly. Fear explains the decline. The rapid speed of the decline shows the level of fear was high.

Now, for a moment, think about watching a horror film.

Scary scenes affect everyone differently. But after a fright, viewers need a few seconds to recover. The bigger the scare, the longer it takes to recover.

That same idea applies to the stock market. After fear develops, traders need time to recover. This shows up on the chart with prices needing time to recover after sharp moves.

It’s seven months after the all-time high. By now, many traders have forgotten how scared they were in January.

Without that emotional baggage, prices will move up as traders rush into the market. But how much should we expect prices to move?

On a chart, price action measures the strength of fear and greed. The distance from the high to low is one way to measure the level of emotions.

In this case, prices fell sharply starting in late January. It took months for traders to recover. But now they are greedy again.

To find the price target, we find the size of the last big price move. The S&P 500 fell about 291 points. That represents the level of fear. Now we expect greed to push prices up at least 291 points.

Emotions often take prices much further than the targets. That means we can expect the S&P 500 to move past the price target. And that means now is the time to buy.