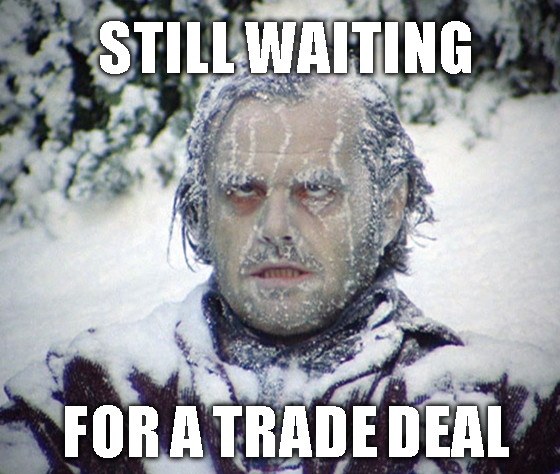 It’s a cold Monday too … and I’m not just talking about the weather.

The U.S.-China trade war front has grown cold as well.

Last week’s enthusiasm over a “phase one” trade deal all but died after President Trump signaled that he didn’t approve tariff rollbacks as part of the agreement.

That chill in the air you felt in the market today blows in from the East. Chinese officials were reportedly troubled by Trump’s tariff comments. Apparently, they thought they had a good-faith agreement involving tariff rollbacks.

According to Eunice Yoon from CNBC, a Chinese government source says the country is now debating a wait-and-see approach when it comes to U.S.-China trade — specifically regarding U.S. impeachment proceedings and the U.S. 2020 election.

After last week’s “get tough on China” move from Trump, it’s understandable that China would consider just waiting it out at this point. However, that means that Trump’s promised December tariff increases will go into effect.

What’s more, Trump promised that if China doesn’t agree to a deal, he will “substantially raise those tariffs.”

If you’ve been following the Great Stuff Trade War Cycle chart, none of this is especially shocking. This is exactly how things have gone for the better part of the past two years.

What’s different, however, is the fact that the market has yet to react to this latest round of “get tough on trade.”

Part of this market buoyancy comes from U.S. officials, who have successfully maintained an optimistic outlook on the phase one deal. On Friday, White House economic advisor Lawrence Kudlow reiterated that the U.S. is making “very good progress” on the deal.

However, with the Chinese now publicly going cold on the deal, this smoke-and-mirror game can only hold for so long.

As Trump himself has said, we’ll either get a deal or we won’t.

Right now, “we won’t” appears to be leading in the polls. It’s only a matter of time before Wall Street finally realizes this and reacts.

Karuna Therapeutics Inc. (Nasdaq: KRTX) … what a wonderful phrase. And after today’s phase 2 clinical results, it ain’t no passing craze.

This morning, the biotechnology company announced that its KarXT treatment for acute psychosis in schizophrenia patients met its primary phase 2 endpoint.

“In addition to its novel mechanism of action, KarXT could be a new therapeutic option that has the potential to offer robust efficacy devoid of weight gain, metabolic effects and extrapyramidal side effects,” said Jeffrey Lieberman, a member of Karuna’s scientific advisory board.

Translation: The treatment is (allegedly) effective with minimal side effects.

The breakthrough is huge for many who suffer from various forms of schizophrenia. Not only is it a unique approach to treatment, it also lacks one of the major side effects of traditional treatments: weight gain.

But KarXT could also find applications in other central nervous system disorders, including Alzheimer’s. That’s huge!

How huge? Investors pushed KRTX shares up by more than 370% today.

Karuna expects to launch a phase 3 trial by the end of 2020.

Since its initial public offering (IPO) at $16 per share back in June, KRTX gained a whopping 295%.

Who says the IPO market is dead?

The Bad: You Can’t Copy a Copy

HP’s board issued a statement that says the bid undervalues its business and that it’s concerned about “outsized” debt levels surrounding the deal.

The company didn’t rule out a potential deal down the road, saying it was open to exploring other options with Xerox.

That said, HP threw some serious shade Xerox’s way. The company said it had “serious questions” regarding Xerox’s business prospects and its recent revenue decline.

The Ugly: Under Pressure

The Boeing Co. (NYSE: BA) is getting impatient.

This morning, the company announced that Turkey’s SunExpress is buying another 10 737 Max 8 planes — on top of the 32 planes it’s already on the hook for. At list prices, that values the deal at $1.2 billion.

The sale was almost enough to distract from a bigger story that broke this weekend … almost. You see, Boeing’s 737 Max 8 aircraft has been grounded by the Federal Aviation Administration (FAA) for eight months now … and the company is tired of waiting for approval.

According to reports, Boeing began pressuring FAA officials to speed up its testing and approval of the 737 Max. Reports don’t specify what kind of pressure Boeing is exerting, but it was enough to prompt FAA Chief Stephen Dickson to post a video to staff, urging them to resist Boeing’s advances.

Complicating matters further, flight crews at American Airlines Group Inc. (Nasdaq: AAL) are begging union officials to keep them from being assigned to the planes after they return to service.

BA shares began the day with a 1% rally on the SunExpress news before rolling over and heading for a loss on the day.

Remember that CBOE Volatility Index (VIX) chart we looked at back on October 29?

Yeah … it hasn’t gotten any better. At the time, I warned you that low VIX readings have been harbingers of market declines. Every single time that the VIX has traded in the 12 to 13 region in the past year, it foreshadowed a market correction.

Here’s how the chart looks today: 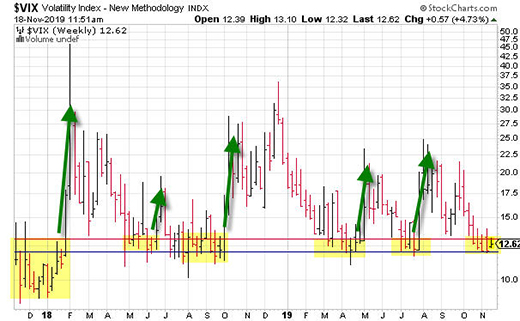 As you can see, we’re overdue for a rebound in this so-called “fear index.”

Considering that the Great Stuff Trade War Cycle chart has been teetering on the precipice of the “market sells off on trade war fears” for more than a week, I think it’s just a matter of time before the next correction hits.

We all know that changes aren’t permanent. But change is.

And a massive change is coming to the automobile industry.

In the U.S., Colorado, California and other states are also jumping on the zero-emissions bandwagon.

The problem is that EVs need precious metals to power their batteries.

As Banyan Hill expert Matt Badiali put it: “Something has to give. Either we scale down plans for electric cars, or the prices of base metals like nickel and copper need to rebound. There’s not enough supply right now to support the EV market’s plans.”

Scaling back EV demand doesn’t seem realistic right now given the global push toward zero emissions. And this presents a crucial investment opportunity in precious metals — and nickel in particular.

To find out more about this opportunity, check out Matt’s article: “Nickel Prices or Electric Vehicle Supply — Either Both Grow or Neither Will.”