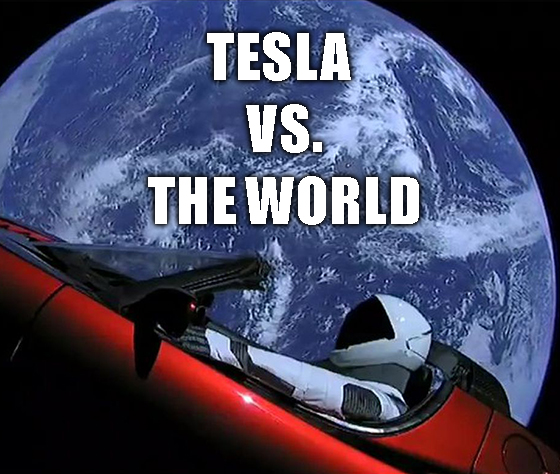 Tesla vs. the World

Imitation is the sincerest form of flattery.

It’s an axiom that holds true in most parts of life. Kids imitating their parents. Friends imitating your style. Investors imitating Warren Buffett. All of these things are flattering to some degree for those being copied.

In some areas of life, imitation is a sign you’ve made it big. Kurt Cobain of Nirvana once said that “Weird Al” Yankovic’s parody of “Smells Like Teen Spirit” was a sign that they’d finally made it as a band.

(What in the world are you talking about, Mr. Great Stuff?)

Specifically, Tesla has been the target of a multitude of “Competitor vs. Tesla”-style headlines in the financial and mainstream media lately. Just take a look:

We have Ford Motor Co. (NYSE: F). We have Volkswagen. We even have BMW and Ferrari! And that’s just a small sample.

How flattering it must be for Tesla to see comparisons to all these massive automakers with storied histories in the industry?

But Tesla isn’t just being compared to the Fords and the BMWs of the world … it’s now the standard by which all others entering the electric vehicle (EV) market are judged.

I can hear the Tesla naysayers now: “Here’s another rant from this Tesla bull.”

That’s fine. There are valid reasons to not like the company. Profitability concerns. Production concerns. CEO Elon Musk is a brilliant idiot if there ever was one — a man who’s currently in a legal battle over his flippant use of Twitter.

But you can’t ignore Tesla’s success. In just 16 years, Tesla became the de facto standard for EVs. It’s the leading EV manufacturer in the world with about 12% of worldwide sales.

Last quarter, Tesla finally turned a profit. Sure, those profits might be fleeting as the company spends to expand production into China and Germany. But it means that the company remains on the right track — despite the public spectacle Musk can be at times.

What’s more, I’d rather see a company spending on growth than on share buybacks. It means it has a vision, a long-term goal that it’s focused on to grow shareholder value instead of a “right now” stock price boost. I’m looking at you, Ford.

What I’m saying is that Tesla battled its way through an exceedingly tough auto market. It had some government help, sure. But even that isn’t a guarantee of success — cough Chinese Nio Inc.’s (NYSE: NIO) 80% surge in losses cough.

We’re far from the end of this battle, but one thing is abundantly clear: Tesla is now the measure by which every automaker — even Henry Ford’s storied Blue Oval — will be judged in the EV market.

Tesla has made it.

The Good: Rebuy the Resale 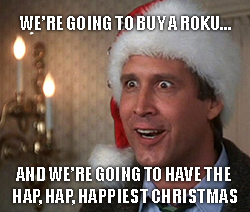 It’s no secret that I’m a Roku Inc. (Nasdaq: ROKU) bull. I recommended buying ROKU back in May, and the stock is up roughly 70% since.

But even if you didn’t get in on the initial recommendation, I’ve advocated buying ROKU during every dip … such as the most recent nod on November 7.

Today, you have another buying opportunity. Roku shares are down about 6% today after the company announced that investment funds will resell more than 570,000 shares. This is part of an agreement Roku reached when it bought advertising company Dataxu.

This selling is nothing to be worried about for us. These investment funds have been holding ROKU since the company went public, and now they’re taking some profits following an agreement with Roku.

In other words, these ROKU sales have nothing to do with the company’s business model, recent earnings report or company projections. They’re taking profit, pure and simple.

That said, with Black Friday and the holiday shopping season shaping up to be a big deal for Roku, these investment funds are jumping the gun on profit-taking.

If you don’t already own ROKU, today’s dip is an excellent buy-in opportunity. 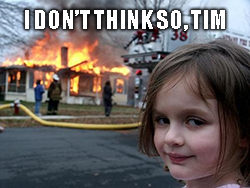 The company missed third-quarter sales estimates and lowered its 2019 growth outlook for the second time this year.

Still, same-store sales only rose 3.6% on the quarter, well short of the anticipated 4.6% growth.

What’s more, Home Depot said it sees full-year same-store sales growth of just 3.5%, down from 4% — the second such cut this year.

There may be a bright spot in Home Depot’s future, however. U.S. housing starts rebounded in October, and building permits rose to their highest level in more than 12 years. Lower borrowing costs due to the Federal Reserve’s rate cuts were credited for the bounce.

With new-home demand rising, Home Depot could benefit in early 2020.

The Ugly: Discounting the Discounter 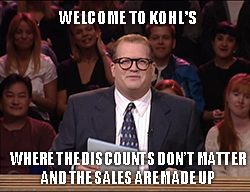 That could’ve been the end of it, but Kohl’s also lowered its full-year earnings expectations in anticipation of weak holiday sales.

It looks like that deal to return Amazon.com Inc.’s (Nasdaq: AMZN) orders hasn’t increased foot traffic like the company expected.

What’s more, Kohl’s appears to be losing out to a resurgent J.C. Penney Co. (NYSE: JCP). When J.C. Penney is eating your lunch, you know you screwed up somewhere.

When your job is to read market headlines about trade wars, politics and companies making a muck of things … it’s hard to maintain a positive investing mindset.

Paul — you know him, you love him — has a very optimistic outlook on the U.S. economy (if you couldn’t tell from the quote above). This quote comes from his latest article: “What’s Boosting the U.S. Economy? Small Business & Millennials.”

Aside from answering his own question in the headline, Paul’s article takes a deeper look at these key drivers for the U.S. market — and why you don’t want to miss out on this massive economic boost.

Paul identified what could be the greatest innovation in history … an opportunity that could be seven times bigger than computers, tablets and smartphones combined!

To find out more and get Paul’s expert analysis, click here now!

It’s time to sound your barbaric yawp over the roof of the world!

Here, let‘s get your yawping started: 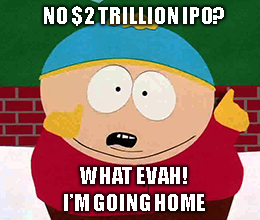