Fox Business News interviewed me last Friday. I discussed the brewing U.S.-China trade spat that’s set the market back about 3% over the past few weeks.

You can view that interview here:

The key point here is that the U.S. and China are both entering this standoff from positions of strength. This leaves the tit-for-tat with room to escalate, an outcome that would be unfavorable to markets.

But there are signs that the market is starting to force President Donald Trump’s hand. The administration has already taken a few opportunities this week to quell fears of an escalation.

Bracing for a Trade War

Keep in mind, China is not the export powerhouse of yesteryear. It has spent the last decade liberalizing its own markets and increasing domestic consumption. These measures have doubled per capita income, growing its middle class and cutting its reliance on exports in half.

The bottom line is that tariffs on Chinese goods aren’t as punitive as years past.

China also has leverage on the U.S. economy, as it owns $1.2 trillion of U.S. government bonds. The combination of rising U.S. inflation and ballooning budget deficits means the U.S. will need to find a buyer for all that debt.

As trade relations now stand, most of the dollars earned from Chinese exports to the U.S. find their way back into U.S. financial markets. This process has kept interest rates low and boosted stock prices.

So, what would happen if China were to flip and become a net seller of Treasurys?

Well, this would be “cutting off the nose to spite the face.” Or, rather, a self-destructive overreaction to the problem.

If China decided to start unloading U.S. Treasurys, it would lead to a spike in interest rates and a slowdown in the U.S. economy. And when the U.S. sneezes, the rest of the world catches a cold, including China.

But that doesn’t mean China won’t attempt to play hardball with U.S. tariffs, as it has promised to retaliate “dollar for dollar” on any trade restrictions.

As reported this week in the Wall Street Journal, Chinese officials are bracing for a trade war. President Xi Jinping has stepped up efforts to encourage Chinese farmers to grow more soybeans. They’re one of the biggest exports from the U.S. that would be subject to new tariffs.

The White House pushed back on media reports that it had planned tough new restrictions on Chinese investments in the U.S. It called them “fake news.”

It also dismissed news of toughening export controls on Beijing. Instead, the White House asked the Commerce Department to study “the transfer of export of critical technologies.” There’s no deadline for the department to report its findings.

And there are no plans for negotiations before the first round of tariffs take effect on July 6. But China has hinted it would be open to talks if the Trump administration backed away from a fight on investments.

The Market Will Force Trump’s Hand

The last thing the stock market wants to see is both sides digging in, preparing for a battle over trade. Yet both leaders want to exit this negotiation looking like they’ve landed the best possible outcome for their countries.

The X factor is that the Trump administration loves to tout the stock market’s performance under its watch. And there has been a 29% rally in the S&P 500 Index since the 2016 election.

That’s why any hiccup in the market might lead to a de-escalation from Washington. Even though the U.S. economy is better positioned to absorb a shock, an all-out trade war would be an unpredictable event. The ripple effects could lead to a summer swoon in stocks, and put House and Senate Republicans in jeopardy as we near the midterms.

The market is starting to sniff this negative potential outcome. And institutions are starting to hedge their risk of a market sell-off.

The CBOE Volatility Index (VIX) tracks investors’ perception of future volatility. It has climbed 25% this week to its highest level in two months. 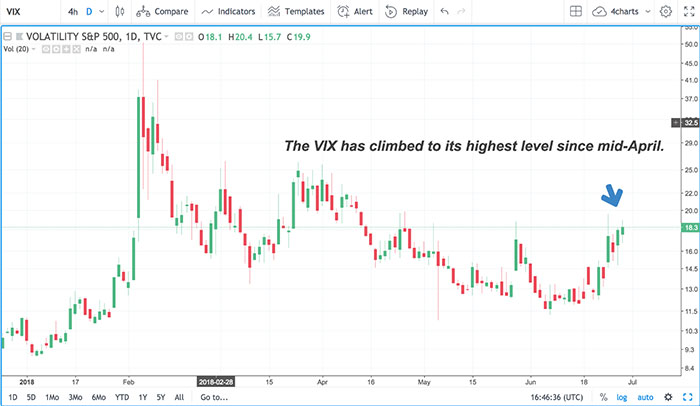 Higher volatility doesn’t mean we’ll see a sell-off. It means there’s an uncertain outcome ahead. If anything, higher volatility means we will see a bigger rally if this conflict comes to a quick resolution.

I’m in the camp that Trump won’t “snatch defeat from the jaws of victory,” but only time will tell.

Editor’s Note: When the U.S. economy inevitably collapses, those “playing it safe” will see their savings accounts dwindle by 50% as the dollar gets decimated. That’s why you need to take action today … and not sit idly by, letting everything you have worked so hard for be stripped away from you piece by piece. Preparing now for the inevitable is critical, which is why best-selling economist Ted Bauman wants you to have his new book (a $79 value) and two critical reports (valued at $99 each) for absolutely free. After all, Ted is confident that those who prepare now will not only survive, but thrive in the years ahead. To take advantage of this limited offer now, click here.