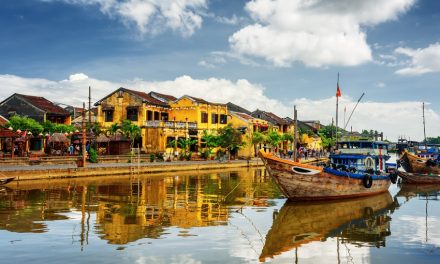 We spent at least 20 minutes waiting to pay to park at the beach on Memorial Day.

And by golly, I wanted to get my time and money’s worth.

I was thankful when my kids told my mother-in-law that they weren’t ready to leave the beach to go swim at the pool.

I prefer the beach, and there would have to be a good reason for me to choose to leave for the pool.

Not everyone shares my sentiments. But, all other things being equal, it’s a choice I make, and I have my reasons.

When I started working on today’s article, I started thinking about how similar investing is to our everyday lives. It’s full of choices and reasons. But it’s not quite the same.

The trade war is a case in point. Investors are making choices of where to put their money, and the markets are more volatile because of it.

There is one country set to thrive in the next 10 years. Even if — and maybe because — the trade war transforms global trade relationships.

And you can benefit too.

Last week, I explained how trade war volatility will knock the U.S. dollar off its pedestal. In that scenario, global stock markets will win … eventually.

And when they do, emerging-market stocks will outperform stocks in developed markets.

I pointed you to the iShares MSCI Emerging Markets exchange-traded fund (ETF).

The ETF’s holdings are 31% weighted in Chinese stocks. After that, it’s composed of stocks from India, Russia, South Africa, Brazil and a host of Asian nations.

But one nation did not make that list: Vietnam.

Presumably because its economy is smaller than its emerging-market counterparts.

Vietnam’s economy is a risky choice because it is a less mature market. But it’s full of promise.

And the trade war adds an element of intrigue to an already alluring investment in Vietnam.

The country is harnessing the digital economy. And it’s developing new industries to drive future growth.

China and Hong Kong are pouring investment money into Vietnam this year.

In the first five months of the year, foreign direct investment into Vietnam rose 69% when compared with the year-ago period. China and Hong Kong are responsible for 30% of that increase.

The United States is importing far fewer goods from China as a result of the trade war. And Vietnam will fill that gap as U.S. companies choose an alternative source.

Vietnam is the 12th-biggest exporter of goods to the United States. Analysts expect it to become the seventh-biggest source of exports to America by the end of this year.

That’s a sign Vietnam is growing its export market. But the latest data reveals its competitors’ export markets in Japan, South Korea, Singapore and Taiwan are beginning to contract.

Again, Vietnam is still small by comparison, as this chart of per capita GDP shows… 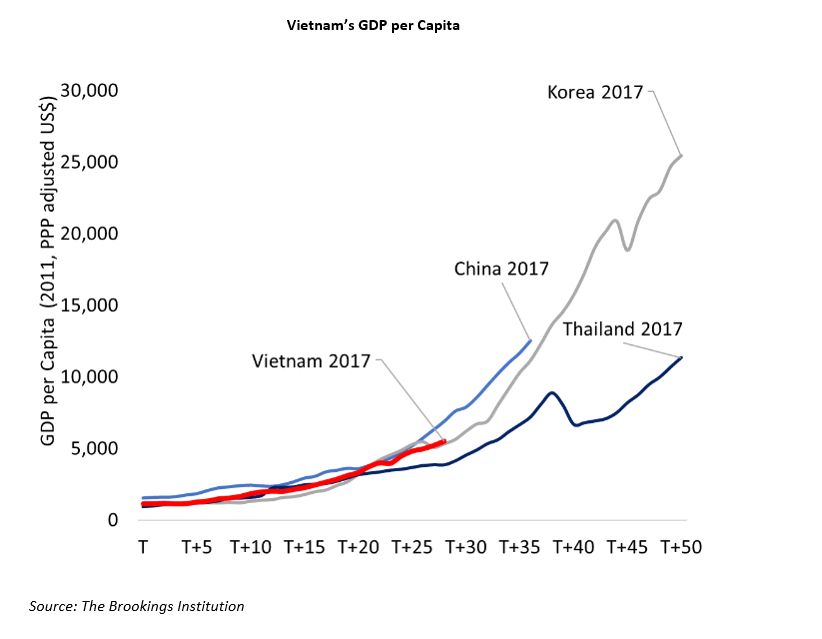 Another sign of their financial economy’s adolescence, Vietnamese still make most payments in cash and gold bullion.

That’s neat, but it can slow the pace of Vietnam’s economic transition.

Fortunately, technology and innovation have the potential to take Vietnam’s economy and consumers to the next level faster than ever.

Consumers will shift to a more conventional banking system. It will have newer and better digital platforms. That will quicken the development and completion of economic projects already begun.

The VanEck Vectors Vietnam ETF (NYSE: VNM) is the purest way to invest in Vietnam. It tracks the MVIS Vietnam Index. It follows the performance of the largest and most liquid companies in the country.

If the trade war escalates in the near term, this ETF could drop along with global stock markets. But it’s a good choice as the trade war volatility continues … even if the U.S. and China don’t come to terms soon.

Next week, I plan to discuss the best choices in U.S. sector investments if the trade war lingers on — stay tuned.