Today I want to talk about Coca-Cola in the 1920s. That’s because what happened back then can teach us something about identifying fantastic buying opportunities in our own time.

You see, before the 1920s, Coke was still a private company. And while highly successful and growing like crazy across the U.S., it had lots of competitors. It wasn’t the dominant, instantly identifiable soda brand it is these days.

For instance, in 1906 Coke was still sold in brown beer bottle-type glass with a paper label. It was only in 1915 that it introduced the first version of its iconic bottle.

The company was still new enough that newspapers misspelled its name as “Coco-Cola” on a regular basis.

These days, a new company typically does not pay a dividend. But the finances of Coke in 1920 were so strong that the company quickly announced its intention to pay a dividend.

One problem was a national recession.

World War I had ended 18 months earlier. Factories, no longer busy churning out guns and ammo for the war effort, laid off millions of workers.

The second problem for Coke was the cost of sugar. The price was fixed during the war years. When peacetime came, suddenly there was huge demand for sugar and not enough supply to go around.

It had enough money to either pay for a trainload of high-priced sugar or pay a dividend. It couldn’t do both. So Coke temporarily suspended its dividend. 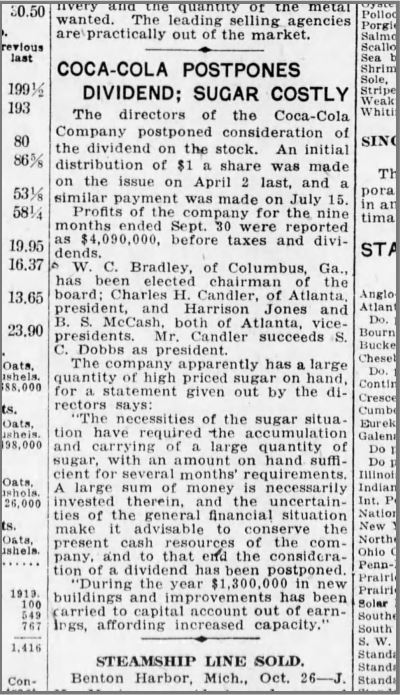 Shareholders weren’t pleased. By the end of 1920, Coke stock was down more than 50%. 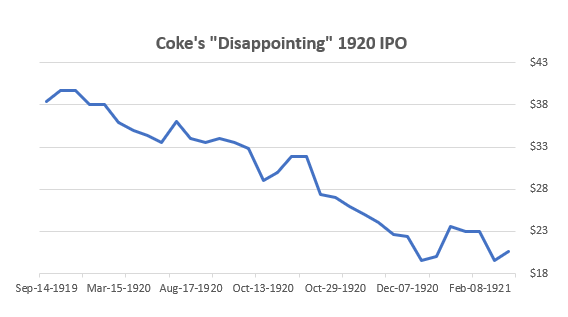 It was the buying opportunity of the century. But, of course, almost no one would have recognized that at the time.

How to Find the Best Companies

Here’s what I tell subscribers of my Total Wealth Insider newsletter: The best companies — the ones that will live on through good times and bad — are usually ones that generate large amounts of cash flow. That’s something we focus on with the companies in my model portfolio.

Coke, in the 1920s and now, is one of those high-cash-flow companies.

So it’s not surprising to learn that, after being down 50% from its initial public offering (IPO) in 1920, Coke stock doubled in value in 1921.

And, of course, Coke went on to become one of the most iconic brands, and one of the best stocks to own, over the 99 years since its IPO.

Not every company we buy becomes the next Coke, obviously.

But in my years as an investor and former financial journalist, I’ve learned one thing: If you want to make money in the stock market, one of the best things you can do is focus on companies with strong cash flow, just like Coke in 1920 when its stock was down 50%.

If you can find a company with that quality — and whose price has been temporarily knocked down by the short-term thinkers on Wall Street — you have a stock with very good odds of becoming a huge winner for your portfolio.