This Could Have Prevented the Tragedy in Ukraine 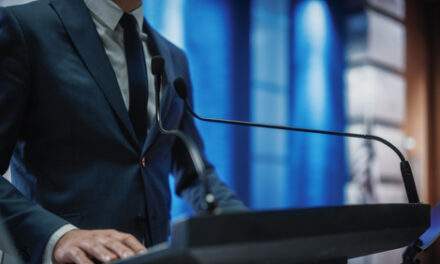 When I watch the events in Ukraine, I still believe it’s even more tragic because the war was simply unnecessary.The world was ready for another cold war. In the last cold war, both sides agreed that Austria would be neutral. There was nothing wrong with designating some neutral spaces to avoid war and define the parameters of the cold war.We could’ve done the same thing this time. Thousands of lives could have been saved. But that’s not the path our leaders chose.In the west, our leaders chose to follow the strategy of Secretary of State Dean Acheson. In January 1950, Acheson gave a speech defining America’s defensive perimeter in Asia without including Korea.Six months later, the Korean War began.President Biden never sent a clear message on Ukraine. He said in early February he would not send troops to rescue Americans if Moscow invades Ukraine.Earlier, he had said that the military option was “not on the table” and “there is not going to be any American forces moving into Ukraine.”Earlier still, he almost seemed to give a green light to a small invasion when he said, “It’s one thing if it’s a minor incursion and then we end up having a fight about what to do and not do, et cetera.”Allies also sent the wrong message.Germany, in a diplomatic misstep, offered to send 5,000 helmets to Ukraine to protect against invasion. It would later delay its decision to cut Russia off from SWIFT, along with Italy and Hungary. All three countries would shift sides yet again and become strong allies to Ukraine after the invasion.With their words and inaction, it’s almost as if Western leaders sacrificed Ukraine just as Acheson sacrificed South Korea more than 70 years ago.Here’s why I’m telling you this…About a week ago, as the Russian invasion of Ukraine began in earnest, I wrote that I understood why Russia did what it did from a strategic perspective.I’ll concede that we pushed the envelope a little far with our subject line “This Cold War Warrior Is Siding With Russia.”Regardless, that doesn’t mean I support Russia’s invasion in any way.Some of you agreed with these comments…Roland R. told me…

Mike, you’ve summed up the situation beautifully. Thank you!

Totally agree Mike! U.S. would do the same in their shoes! eom

(Note — I don’t know if eom is widely used, but it’s often included in messages in the military to mean “end of message”.)

Thank you, Mike, for sharing your poignant ideas concerning the war in the Ukraine. It turns out that I agree with you concerning your analysis on the war’s preventability. I am heart-stricken at the suffering that has already occurred in the Ukraine and that might yet transpire, especially for the young and elderly. Keep up the good work on your investment methodologies.

Of course, some of you disagreed strongly. And today I want to address some of those comments.

Am I a Traitor?

Leslie B. may have had the strongest words…

I just read the email from Mike Carr with subject line “This Cold War Warrior Is Siding With Russia”.  He is a TRAITOR! To somehow justify Russia’s action of invasion against Ukraine based on the Monroe Doctrine requires real intellectual gymnastics.

I do understand, Leslie, that there are two sides to this issue. I respect your view and hope you’ll look past this difference of opinion.David H. wrote…

Siding with Russia? The country trying to take over another country? Michael Carr you are a traitor. You obviously have bought into the Trump lies and drivel.If Russia wasn’t such a military power, we would be blasting the hell out of them, just like we did to Iraq when they attacked Kuwait. I’m sure you agreed with that action. What has changed? You obviously have become indoctrinated by the continual lies of the Trump organization, and have given up your ethics, morals, and truth. Sad for an intelligent person.

Thank you for noting my intelligence, David.

I did agree with removing Iraq from Kuwait and I would support a full-scale mobilization at this time to free Ukraine. I cannot understand why that’s not on the table. Ukraine is a country NATO welcomed into its Partnership for Peace and has been working toward EU membership for years.I advocated avoiding war, but now that war has come, I hate seeing brave Ukrainians die while we offer them only words.There is a 40-mile convoy waiting to attack Kyiv. If I was the President, I would launch strikes against that target and end this nonsense today. Some of that convoy could safely be targeted with dumb bombs while vehicles in urban areas can be reduced to rubble with smart weapons.But no one asked me how to prevent the war, and no one is asking me how to stop it.

I understand the Mexico analogy or even Cuban missile crisis… Yet when has America taken over a country?I agree hands off and no bloodshed of Americans. Russia has invaded several territories since 2009.

The U.S. has a long history of taking over countries. Our actions in the Philippine-American War from 1899 to 1902 are appalling. It’s tough reading, but you can see read about some of the atrocities here.And that’s far from the only example. A list of dozens of U.S. military interventions is here. Details on 81 attempts to intervene in foreign elections from 1946 to 2000 is here.Russia has invaded a number of territories since 2009 and never faced consequences. That’s because of a lack of leadership from the West. It takes a strong leader to stand up to such aggression.Unfortunately, both U.S. interventions and Russian aggression are historical facts. Months ago, as the Russian buildup continued, we had an opportunity to engage in a way that could deter the invasion. No one stood up for Ukraine and now we are watching brave individuals die for their country.Mos provided some detailed comments I’d like to address…

The NATO argument justifying Russia’s defensive concerns does not explain Putin’s invasion into Crimea and into the Donbas. At that time, Ukraine’s desire to join NATO was not going to happen because of opposition from inside NATO itself led by Merkel and others. Those events triggered the present desire for Ukraine to join NATO.

Ukraine joined NATO’s Partnership for Peace in 1994, about 20 years before Russian’s invasions of Crimea and the Donbas. The PfP expanded to Russia’s borders and left Russia feeling like a defeated power rather than the superpower their government believes they are. This was an example of how our leaders don’t think strategically.Mos continues…

My point was that the U.S. did not want Soviet weapons in Cuba, less than 100 miles from Florida. It is rational for a country to prefer opposing militaries stay far from their borders. The response to the Cuban Missile Crisis was rational and appropriate. No civilian lives were lost.Today, we can only wonder if a similar diplomatic and non-lethal military response to the Ukrainian crisis could have spared that country from its current situation. I’m saddened to know that no one even tried to resolve this crisis with words before the tanks rolled in.Mos continues, in a separate email responding to our subscribers-only Sunday Debrief…

100% avoidable? Putin is a tyrant and you happen to know that he is unambitious and purely defensive. When was NATO planning to attack Russia?

Yes, Putin is a deplorable tyrant. But he does know that NATO has detailed plans to attack Russia including multiple nuclear options. Putin may have noticed the big exercise that the U.S. conducted in January to ensure the nuclear force was ready.

This whole situation brings a comparison with Czechoslovakia in 1939 [when Western powers agreed to hand over part of Czechoslovakia to Germany without a fight].

No one was suggesting that Ukraine be ceded to Russia.

I do believe that a simple statement could have prevented war:“Ukraine is and will remain independent. For now, it will remain neutral, free to interact with all nations in the way any independent country is free to. Ukraine’s allies will not accept any threat to its independence. Any violation of Ukrainian sovereignty will result in a forceful response including the full range of diplomatic, economic and military actions. No one should doubt our sincere commitment to our friends in Ukraine and all free countries.”Tyrants like Putin understand the threat of force. Simply offering full-throated support of Ukraine’s independence could have avoided this.I appreciate all of your comments and am as saddened as you are that we are seeing so much avoidable suffering.Regards,

P.S. It was refreshing to see so many comments come in. We enjoy nothing more than hearing your thoughts on our insights, and even a bit of spirited debate.Remember — you can always write us at TrueOptions@BanyanHill.com with whatever comes to mind.Questions, comments, and even trade ideas are all fair game. We won’t give personalized investment advice, but we’re happy to respond to our favorite emails as we receive them.

Chart of the Day:We’re Getting Close to Peak Fear 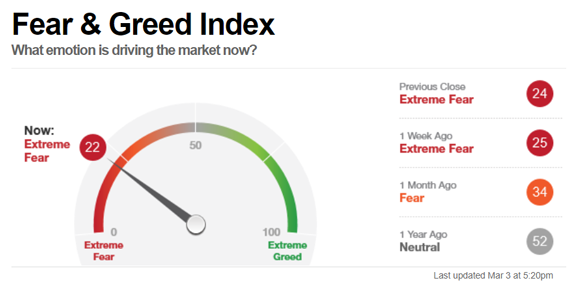 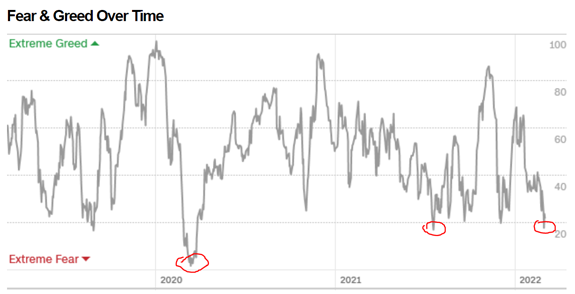 The CNN Business Fear & Greed Index is one of the most popular measures of… well, fear and greed in the stock market.And right now, it’s showing that investors haven’t been more scared about the stock market since summer of last year (I genuinely can’t remember why investors were scared back then, can you?). And before that, the fear gauge was only lower during the pandemic.What to make of this? Probably that it’s a blaring contrarian indicator.This index crunches a number of factors together: the S&P 500 relative to its 125-day moving average, the put/call ratio, the VIX, junk bond demand, and a few others.With all of these things so suddenly and rapidly pointed in the fear direction, and noting all the other times that this gauge spiked downward, the logical play here is to bet on a surge back up toward greed.Bet broad — call options on the SPDR S&P 500 ETF on any weakness, dated out a few months, will probably serve you well here.Regards,