Every investor should keep a copy of Reinhold Niebuhr’s “Serenity Prayer” in sight these days.

The stock market is beyond our control. We’re missing the key ingredient: reliable information.

Investment skills are based on experience of similar situations. As an investor, you can only be in control if you have reliable information about the likely future.

That’s why we hang on every word of quarterly earnings reports and eagerly await the latest unemployment and gross domestic product (GDP) figures.

They may not be 100% accurate, but they help us tip the balance of “known” and “unknown” in our favor.

Today, every responsible person tells us it’s impossible to predict the economic future.

The balance between the known and the unknown has been turned on its head.

Of course, we know some things for sure.

The problem is that the most important known of all may come to a premature end.

And once you accept that, you can protect your investments by taking a few simple steps … steps that recognize the importance of the unknown.

The second most important fact in the current U.S. economy is the fiscal stimulus provided by the Coronavirus Aid, Relief and Economic Security (CARES) Act of March 27 this year.

The first most important fact is that it may end.

The CARES Act was the biggest fiscal stimulus ever enacted by Congress. It was equal to 10% of GDP.

Here’s how it was distributed: 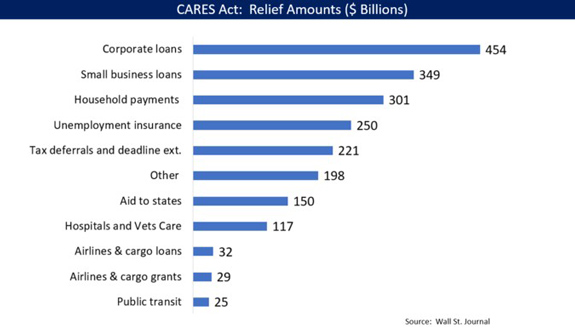 That’s a huge amount of money.

You can see it reflected in this incredible jump in the measure of M1 money supply from March onward:

But the CARES Act assumed COVID-19 would be brought under control quickly.

The economy would go into “suspended animation,” temporarily slowing or stopping to preserve its functions for a few months, until the virus dissipated. Then we’d resume normal activity. If businesses didn’t have to close and workers didn’t have to lose their jobs, the reasoning went, then our economy could quickly return to its previous trend … as long as the virus was under control.

Unfortunately, that hasn’t worked out so well: 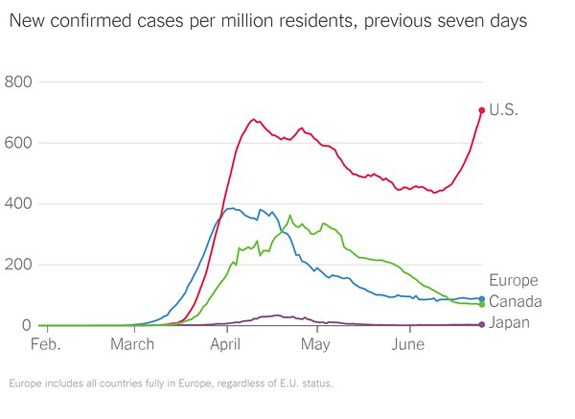 The logic behind the fiscal stimulus in the CARES Act is simple.

This Keynesian framework dominated U.S. policymaking until the late 1980s. But, the Reagan Revolution brought it to a halt.

Because raising taxes was a no-no, Congress continued to run deficits. But, Washington became increasingly hostile to government spending on everything other than defense. Eventually, even the Democrats under Bill Clinton — the last administration to run a budget surplus — joined the austerity choir.

We can see the result of the anti-Keynesian trend in U.S. recessions.

Until the end of the 1970s, recessions were generally short and sharp — over within about 18 months.

Under the more fiscally conservative Reagan and George H. W. Bush administrations, the recession lengthened out to about two and a half to three years.

With the 2001 recession, the time needed to recover began to lengthen. It took four years to recover all of the jobs lost in that recession. 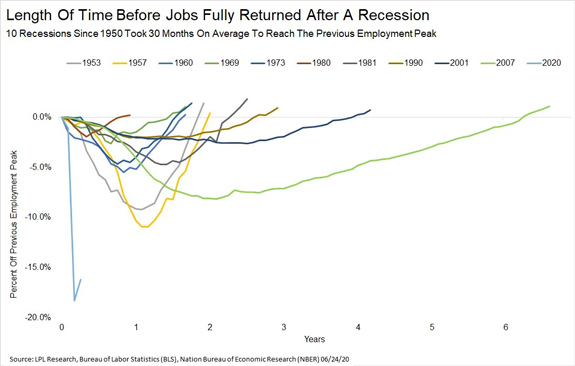 But Only If It’s Used

The next chart shows why fiscal stimulus matters.

Stimulus after the 2000-01 recession was small but lasted long enough to claw back lost jobs in about four years.

By contrast, after the 2007-09 recession, stimulus ended quickly. Congress refused to approve spending or increase the debt limit.

Eventually, they passed a budget sequester bill, which led to the five years that government fiscal policy actually held GDP growth back.

The result was a slower recovery than following any previous recession: 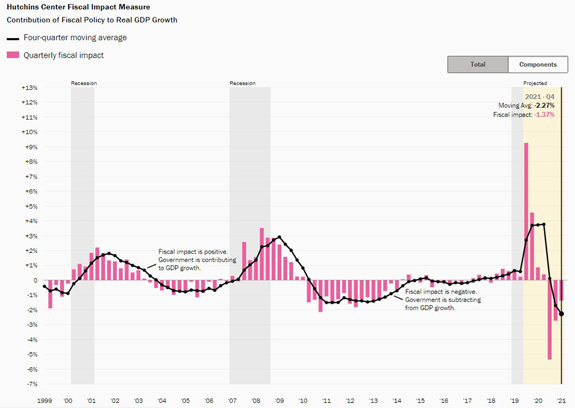 The far right-hand portion of the chart shows the huge spike in fiscal stimulus from earlier this year … along with projections of the impact on GDP if it is not extended.

And that’s precisely the problem.

With the recent dramatic rise in COVID-19 infections, if stimulus isn’t extended, the economy is almost certain to go even deeper into a recession.

The signals from Washington are all over the place.

Senate Republicans are reluctant to extend or renew stimulus.

The White House tells us the crisis is ending, which makes it hard for them to argue for more stimulus.

House Democrats are submitting stimulus plans they know won’t pass, so they can blame Republicans for the results in the run-up to the November elections.

The chart below shows the relationship between Google.com searches for common personal-consumption items and the level of the S&P 500 Index. You can see that people’s confidence to spend perked up when the stimulus was passed in late March.

Now you could argue that the stock market’s rise is driving consumption expenditure. But given that only a minority of better-off Americans own stocks, it’s a safer bet that stimulus gave consumers the confidence to spend, which helped the stock market: 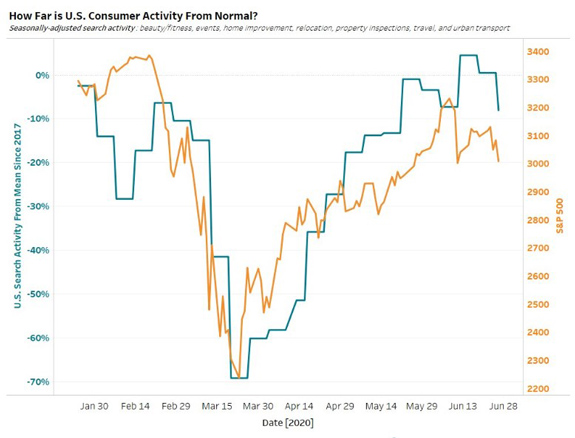 The Most Unknowable Unknown of All

Bulls like to say the stock market is forward-looking. Stock prices are based on where we’re headed, not where we are.

Normally that’s true. But now, all of us are feeling our way blindly through unfamiliar terrain.

Thousands of companies have retracted their earnings guidance for the rest of this year. Economic forecasters say they can’t predict what’s going to happen next … “It’s up to the virus,” they say.

My take is that investors are discounting the most dangerous unknown of all … whether Washington will continue to stimulate the economy.

If it does, the economy and stock market may avoid a lengthy period of decline. If not, we could see things get a lot worse … and quickly.

I can’t imagine anything worse than having to depend on politicians and bureaucrats in Washington to determine the fate of my stock portfolio.

But here we are. That’s why I’m following my own advice, and you should too:

And above all … don’t bet the farm on what Washington may — or may not — do.