Home » Investing » The Fed Is Too Late to Fight Inflation

The Fed Is Too Late to Fight Inflation 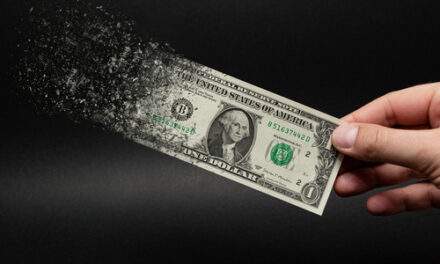 Every three months, Federal Reserve officials update their economic forecasts. Results were announced after this week’s meeting.It’s not good news for the economy…Generally, changes from quarter-to-quarter are small. That wasn’t the case this time.The Fed increased its expectations for inflation in 2022 to 4.3%. That’s up from 2.6% in December.In just three months, the estimate increased 65%, the largest jump since the Fed started providing forecasts in 2007.At the same time, the Fed lowered its estimate of economic strength. The outlook for GDP growth dropped to 2.8% from 4% three months ago. That makes sense — higher prices force consumers to cut back and that slows the economy.Higher inflation, slower growth, and all while the Fed tightens monetary policy. It’s a bad time to be an overexposed investor, but a great time to be a trader.

Inflation Could Lead to a Recession — Prepare With This

If you aim to navigate the next six months of trading well, pay close attention.

One reason for the Fed’s changes is the war in Ukraine. The Fed’s statement noted, “The implications for the U.S. economy are highly uncertain, but in the near term the invasion and related events are likely to create additional upward pressure on inflation and weigh on economic activity.”The good news is the Fed finally appears determined to battle inflation. New projections show officials expect to increase the Fed funds rate seven times this year and another three times next year. That would put the short-term benchmark rate near 2% in December and 2.75% at the end of 2023.The bad news is that the battle against inflation should have started months ago.The other bad news is the Fed’s interest rate projections are inaccurate. Since it started releasing data, the Fed’s projections to two years out have been 2% off on average, in either direction.Assuming that error is to the upside, as is likely given they’re fighting inflation with rate hikes, that puts the Fed funds rate at 4.75% by 2023.After more than a decade of rates near zero, a move to almost 5% would slow the economy significantly. Unfortunately, that seems to be the most likely scenario.

What could lead to rates that high? Inflation.Fed estimates of inflation are also inaccurate, historically off by an average of 1.3%. An average miss to the upside there puts inflation at 5.6% this year.While that’s below the current reading of 7.9%, inflation above 5% through the summer will force consumers to change their spending plans.Consumers are already cutting back on discretionary spending. They have no choice. Spending on gas is up 38% since the beginning of the pandemic. Grocery bills are up 20% over that time.But consumers aren’t driving more or eating steak every night. Adjusted for inflation, spending on gas is down 1% — indicating consumers are driving less. Spending at grocery stores is up 6% but that makes up for the fact that families are going to restaurants less often.With more money going to necessities, less money is going to the discretionary spending that fuels the economy.Let’s look at what this means in practice. Inflation is forcing the average family to spend almost $400 a month more compared to what their lifestyle cost last year. Most didn’t get a raise of $400 a month.So, they are cutting back where they can — on discretionary spending — for now. But if inflation gets worse, the cutbacks will cause even more pain.The Fed waited too long to fight inflation. I’m glad they finally see the problem. But there is a lot of economic pain ahead, including a possible recession.Why do traders care about this?Recessions are associated with declines of 20% or more in the stock market. Traders need to start looking at opportunities in put options over the next 3-6 months that can benefit from declines like that.Regards,

Chart of the Day:Told You So 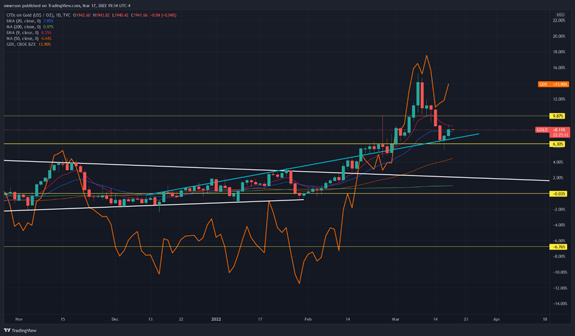 This one’s for my loyal quarter-thousand YouTube viewers who should be making money on my untouchable market calls.Back on Saturday, I told you to play gold falling down to the $1,900 level this week. We got there and then some just a couple days later…But just as I said then, I’ll say now. Gold looks great here. It’s built for the exact type of environment Mike described today. I think it’s far more likely that gold reaches new highs before it reaches back down to the former resistance, now support.And gold bears now have the rising blue support to contend with.If gold does well, expect the gold miners to do even better. The Vaneck Gold Miners ETF (GDX) is up 14% this year while spot gold is up 8%.GDX calls dated out to 2023 are a great speculation on rising gold prices.Regards, 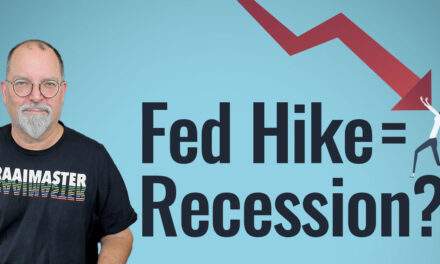