Tesla’s Stock Marches Higher as the Market Ignores the Bears

There are lots of sayings and quotes that float around trading circles. I’m particularly fond of John Maynard Keynes’ popular quip: “The market can remain irrational longer than you can remain solvent.”

It cuts to the heart of emotional trading and warns us that no matter how convinced we are that we are right on any given investment, the market may refuse to agree.

The thing is, this axiom holds true not only for individual investors, but also for institutions, brokerage firms and hedge funds. Take, for instance, Goldman Sachs’ recent bearish research note on Tesla Inc. (Nasdaq: TSLA).

According to Goldman, it remains “sell rated on shares of TSLA, where we see potential for downside as the Model 3 launch curve undershoots the company’s production targets and as 2H17 margins likely disappoint.”

The brokerage firm then cut its price target on TSLA stock to $180, cut expectations for Model S and Model X growth to 5%, and forecast higher cash burn for Tesla heading into the first half of 2018.

The problem here isn’t whether Goldman Sachs is right or wrong. It’s whether or not the market agrees.

Goldman Sachs issued its beatdown of Tesla after the company reported that it delivered only 22,000 vehicles in the second quarter, bringing the total for the first half of 2017 to 47,100, near the lower end of its forecast range. But Goldman wasn’t alone in its bearish view of Tesla. Bernstein, KeyBanc Capital Markets and several others weighed in with their own degree of pessimism.

Cowen even had this to say: “We see Tesla shares as an overvalued show-me story that has traded as a concept stock given the dislocation between share price performance and our/consensus estimates.”

And these are just the more vocal bears in the bunch. Looking at ratings data from Thomson/First Call, you can see that roughly 60% of the 21 analysts following TSLA stock rate the shares a “hold” or worse.

And if the analyst community wasn’t enough, TSLA stock is among the most shorted stocks on the NYSE. More than 29 million shares representing roughly 24% of the stock’s total float were sold short as of the most recent reporting period.

And yet, after a brief dip in the wake of Goldman’s highly publicized research note, TSLA stock is still marching higher … irrationally so.

Tesla’s current situation reminds me of when I first got into writing about the market. I cut my teeth on a combination of technical and sentiment analysis that attempted to find tops and bottoms to stock and market trends.

The idea hinged on the old axiom “the trend is your friend, until it isn’t,” using market sentiment to smooth out that last part. In short, the trend was likely to end once everyone was on board. After all, if everyone who wants to buy (or sell) a stock has done so, who’s left to drive the trend?

To put it another way: “When everyone thinks alike, everyone is likely to be wrong” — Humphrey B. Neill.

With TSLA, we have a stock that has gained more than 70% since December, all the while defying bearish calls from short sellers, analysts and many others. And with the stock holding firm above technical support at $300 and its 20-week moving average, the trend appears to still be intact. 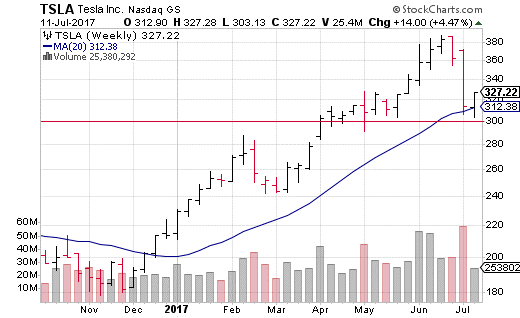 So while Goldman Sachs and the rest might be correct in their analysis of TSLA stock, the market currently does not appear to agree … however irrational that may seem.

Editor’s Note: The Total Wealth Symposium is your one-stop shop for all your investment and asset protection needs. You get access to invaluable speakers who will help you catapult your wealth to new heights … informative and enjoyable presentations from the world’s top financial experts … insights you can’t get anywhere else in the financial world … and a community of like-minded people all there for a common purpose: making $10 million. Click here to learn more about this once-in-a-lifetime event.

Is the Financial Sector About to Break Out?