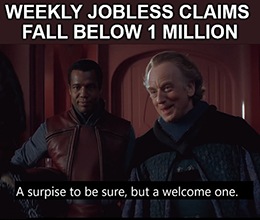 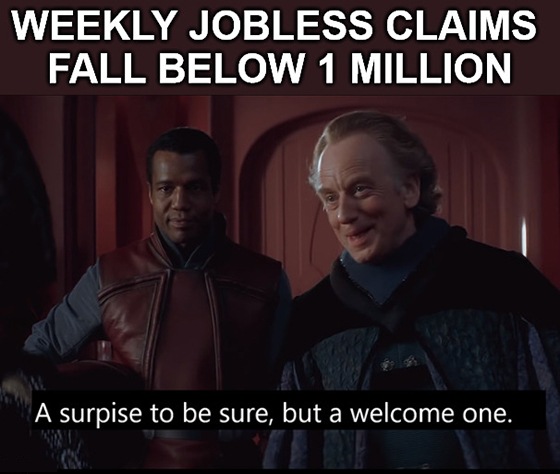 I have to say, your continued outpouring of emails brings a tear to my eye. In the immortal (and misquoted) words of Sally Field, “You like me! You really like me!” OK, so not all of you…

But, just like Howard Stern on an eight-ball bender, disagreement and anti-feedback only fuels the market meme fires that burn in my cold, dark heart.

Well, that was overly dramatic!

Agreed. Let’s move on, shall we?

Before we get to this week’s crop of reader feedback, let’s take a look at some of today’s Wall Street headlines:

Now, you’d think that Wall Street would cheer this positive economic data. But you’d be wrong.

The market heaved a very large sigh and remained largely flat. Even the Dow was unimpressed, pulling back from all-time high territory. Disconnect between Main Street and Wall Street is once again confirmed.

The maker of all iThings is reportedly getting ready to launch new bundled subscription plans. The bundles are said to include Apple TV+, Apple Music, News+, iCloud and Apple Arcade.

There’s even an all-inclusive bushel in the works, reportedly called AppleOne. The name is far from official, and that’s a good thing. Alphabet Inc. (Nasdaq: GOOG) already has a service called Google One. Given Alphabet’s propensity to kill off its own services, I think Apple will want a name that doesn’t remind us of the Google graveyard.

Now, with the daily market niceties out of the way, let’s get right to answering your emails! If you haven’t written in yet, drop us a line at GreatStuffToday@banyanhill.com. We don’t bite, I promise.

Editor’s Note: Wall Street underreaction? Overreaction? Doesn’t matter anymore! Instead of worrying about the constant back and forth…

One strategy lets you use the same ticker symbol week in and week out, cashing in your trade in two days on average. You target 100% gains on each and every trade — no matter how the Dow decides to open that morning!

From Great Stuff with love, I reply to you. Much snarkier than my goodbye to you.

We’re not here to talk Russian vaccines and dreams of normalcy today. (I mean, unless you want to. Go ahead and tell us how you really feel about Sputnik V: GreatStuffToday@banyanhill.com.)

Up on the chitchat chopping block: the pains of convenient online shopping, electric vehicles, trading apps and getting back in shape. We’ve got some ground to cover, so dig in!

Hi guys, thanks for all the great reads and market insight.

I for one value the brick & mortar store. The convenience of online shopping becomes very annoying when you either receive what you didn’t order or the fitting of a garment you just bought isn’t the cut you’re familiar with…

Regardless of the fact that the originally purchased item is needed for tomorrow. Give me the see/feel/know exactly what you are getting before handing over your hard-earned money, physical store.

I take it you’ve played the re-re-return runaround lately, huh? Your email makes me want to hear from all of you out here ordering grocery delivery online, let alone clothes. I mean, I get the concept, but all I’ve heard are horror stories of spilled casseroles and swampy rotten produce.

Curbside pickup is one thing, but we quit doing curbside because the substitutions got ridiculous. The last time, we ordered some sliced deli ham. Kroger was out but thought it was OK to substitute a whole freaking ham … at the same price.

It was weird on both sides. A whole ham for about $4 is ridiculous (but thanks I guess, Kroger). Also, a whole ham instead of cold cuts? Another kind of ridiculous all together.

How is your experience with getting the groceries amid the pandemic? Let us know at GreatStuffToday@banyanhill.com. Now, for a different spin on the in-person shop…

Look at the State of Ya, Lee

The wife and I miss department stores. We are getting fat and need to try clothes on.

Lee, I feel your pain. The Great Stuff team somehow convinced me to take up running again, if not to lose myself in the music … the moment. But every time, my weak knees, sweaty palms and heavy arms only make me think of Mom’s spaghetti.

Editor’s Note: One thing even Mr. Great Stuff can’t run from is the one volatility-beating strategy we recommend: One Trade. One ticker symbol. Once a week. That’s it. That’s all you need to target 100% gains or more — in just two days, on average — with each and every trade. Click here!

Never never shut up your face

I have to say that is the best and most Great Stuff-ish compliment I’ve ever received. Thank you, Bill! In the meantime, I’ll just pretend you didn’t just miss a period or two in there somewhere.

I don’t want to assume, but I think you may be misunderstanding our recent coverage of TikTok, Microsoft and Twitter Inc. (NYSE: TWTR). It’s Twitter and Microsoft Corp. (Nasdaq: MSFT) that are looking to buy TikTok. As far as I know, Twitter isn’t for sale. If you’ve got different news on that topic, please let us know.

But, let’s assume you’re on to something here. I’m really curious as to which big spender could come dump nearly $30 billion for Twitter. Furthermore, with tech giants already testing the antitrust bubble, what regulator would allow such a deal to go through? Let’s ask our next reader what she thinks.

You heard Augusta. Whatever plan you’re hatching, the answer’s no.

I’d like to have a dual-screen, folding phone. The folding aspect is especially attractive since I carry my phone in my pocket. But at $1,399, they are selling to someone other than me. My price point is under $500, and there are still many fine phones available for that money. I see no reason to spend three times as much for the same functionality and a little more style.

Microsoft phone is too expensive for the regular folks, which is a large part of the pop.

David, Barry, I’ve gathered you here today to tell you the bad news: The Surface launch may be worse than we originally thought.

Not only is Microsoft channeling its inner Apple with the price point, and the company’s chief product officer, Panos Panay, rounds out the Steve Jobs flashback.

“When we designed it, the intent was, ‘How do you make something so thin, beautiful, light and super elegant that when people pick it up they can feel that emotion in the product,”‘ Panay said.

I normally don’t answer, or send emails out. I’m very computer illiterate. Let’s put it this way, this is my first iPhone, and I F’en hate this POS phone. If it didn’t cost so much, I would have put it through a wall the week I had it, But I digress, I’m here to answer your questions.

About one year ago I started to buy into a fractional stock app. I am 55 with no 401k, or anything set up for retirement. I’m a veteran (I have served nine years in “The Marine Corps,” I left as a Sgt.) who is on permanent disability (my disability is not from me being in a battle. I have never been in combat, during Desert Storm I was stationed at Camp Lejeune).

So I saw an ad for an app called “Stash.” I didn’t know what I was doing until the pandemic hit. I told my wife that now is the time to invest. So I found “The Motley Fool” (I’m a huge Mötley Crüe fan, so of course I had to subscribe! LOL!)

Slowly I started taking Paul ’s advice, and my money is growing. Out of the 40+ stocks I have in my portfolio only seven are losers. I wish I could tell you my gains % but some stocks I only have $25 in, while others I have invested $100 in.

I have written down Nikola as reminder to buy. I just haven’t done it yet. I been trying to get other tech stocks first, but I haven’t forgotten about them.

I have bought stocks that have been noted in your Great Stuff emails, plus I have written some down to buy. Keep up with your Great Stuff, and to everyone there, stay safe and healthy! From your “Metalhead Marine.”

Thank you so much for writing in, Crit! You’ll have to forgive me for keeping your email brief-ish here (and we won’t tell George Gilder what you wrote about him … though I agree with you, wink wink, nod nod).

If no one else has told you, I’m proud you jumped feetfirst into the investing game! The way you’re handling things is perfect: Stay levelheaded amid the carnage and scout out solid, future-building companies — no matter the size of your account, whether you’re the one-share, stand-alone champ or a billion-share Buffett clone.

You’re already ahead of the pack by following Paul . I personally know he’s helped thousands upon thousands of new investors see investing in a new light, especially with his Strong Hands motivation no matter what B.S. the market’s throwing his way.

And it only costs $4 per month for some of the greatest stuff around. Active trade alerts, up-to-the-minute insights and market-wide investing research — did I mention it’s risk free to try, too?

And above all else, stick with Great Stuff, and we’ll stick by you.

That’s right, great readers like you make what we do possible. Thank you for keeping up with us, and thanks to all of you who wrote in! (Hi Gary C. I know you’re still out there…)

We truly appreciate each and every one of your emails, even if we didn’t get to reply to them all yet. Keep ‘em coming!

There’s more of that fantastic feedback you love in store for next week, so if you have any questions for me, feel free to write in! GreatStuffToday@banyanhill.com is the spot for you to spill your beans or your guts — whichever comes first.

I hope to see your email in next week’s issue! 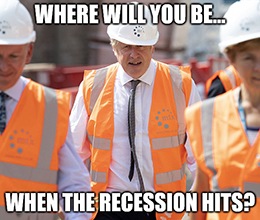 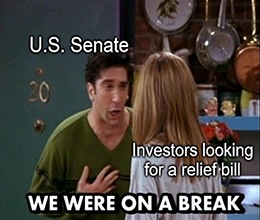