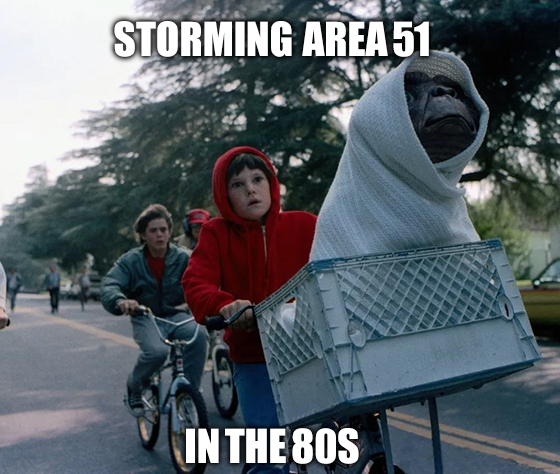 Are we alone in the galaxy?

Today, some quirky millennials are going to try to answer this existential question — while “Naruto running” past government military security.

This bizarre mess all started as a joke on Facebook. Millions of people signed up for a “Storm Area 51” event on Facebook several weeks ago. The creator of the event eventually canceled the movement because too many people were taking it seriously.

However, many pledged to come anyway, “to see them aliens.” But that didn’t stop area organizers from turning the defunct storming into Alienstock. (Why does everything have to be a “-stock” or a “-gate?”)

“We know people will come out. We just don’t know how many,” said Alon Burton, guitarist for a group playing the event at Rachel, Nevada — the closest town to the U.S. Air Force base known as Area 51.

If you’ve watched any media coverage of the event, you’ve likely already seen a few gems.

There’s sure to be more to come, as event planners have scheduled some 60 food trucks and plenty of music acts.

This whole thing is just weird.

Back in my day, there weren’t any food trucks or parties or bands playing. When we stormed a government alien facility, we did it with a plucky group of best friends and BMX bikes to carry the aliens to safety … and we liked it.

Let’s move on, shall we? Before the Men in Black show up.

Here’s your “Storm Area 51” edition of the Friday Four Play: 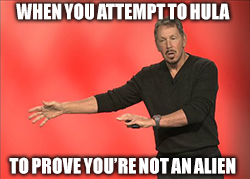 Oracle Corp. (NYSE: ORCL) co-founder and executive chairman Larry Ellison isn’t one to mince words. Larry — who may or may not be an actual alien himself — had some choice words for this year’s crop of tech initial public offerings (IPOs).

At a meeting held at his house in San Francisco, California, Ellison told a gathering of entrepreneurs that WeWork and Uber Technologies Inc. (NYSE: UBER) are “almost worthless.”

Ellison hammered Uber for writing “an app my cat could have written” and claiming the ride-hailing company had “no technology. And no loyalty.”

I think the important takeaway here is that Ellison’s cat can not only type, but also write code. I don’t know about you, but I find this revelation quite terrifying. I’m also looking forward to an app that knocks random stuff off my desk for no reason.

Now, if you want a real tech investment opportunity without all the trumped-up multiples, Banyan Hill expert Charles Mizrahi is your guy. His no-nonsense approach to investing has identified an opportunity that could “mint more millionaires than any other time in modern history.”

Bold words, Charles. Click here to watch him back them up.

No. 2: Overstocked on Crazy 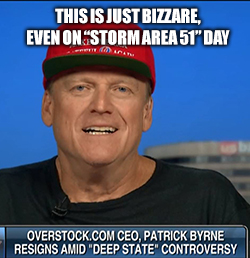 The fact that people are storming Area 51 today is the only reason this Overstock.com Inc. (Nasdaq: OSTK) story will sound anywhere near normal.

Former Overstock CEO Patrick Byrne — a man who would make Elon Musk look like a saint — bailed on his company last month.

Byrne wrote in a bizarre letter to employees that while what he did at Overstock was “necessary for the good of the country,” his presence there was “too controversial.”

But that’s only the tip of the iceberg. Before he left, Byrne instituted a special “digital dividend” for OSTK shareholders. This digital dividend was for one share of Series A-1 Preferred stock for every 10 OSTK shares held.

To claim this digital token dividend, shareholders needed to set up an account with Dinosaur Financial Group and access its blockchain trading system. Dinosaur is operated by Overstock’s blockchain subsidiary, tZero. (I think I just created a new sentence with those words.)

Anyone who follows OSTK knows the stock is heavily shorted. Since short sellers had no way to provide the dividend to the shareholders from whom they borrowed OSTK, they were forced to buy back the stock. The resulting short squeeze sent the shares soaring nearly 100%.

Of course, the Securities and Exchange Commission (SEC) finally stepped in to put the kibosh on this strange dividend, mandating that investors wouldn’t have to hold it for six months. This eased pressure on short sellers and sent OSTK plunging back to earth.

Then, in what can only be described as pure idiocy, Byrne disclosed just hours after the SEC ruling that he had sold his entire stake in OSTK for $90 million. What’s more, he put that $90 million into gold and silver bullion, held outside of “deep state” jurisdiction.

Byrne should head to Area 51 today and chill. That’s some space-age crazy right there. 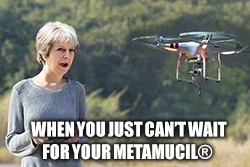 How to you confuse old people? Deliver their medication with drones.

Walgreens was quick to point out that prescription deliveries wouldn’t be available — no one needs airborne Xanax, after all (or do they?).

The interesting thing about this alliance is that Walgreens, not Amazon.com Inc. (Nasdaq: AMZN), will become the first retailer in the U.S. to offer commercial drone delivery. When you think about it, however, it makes sense.

About 78% of the U.S. population lives within 5 miles of a Walgreens store. Those freaking things are almost more prevalent than Dollar Generals. Wing drones only have a range of about 6 miles, making them perfect for Walgreens … and for those last-minute preparations when storming a government alien facility like Area 51. 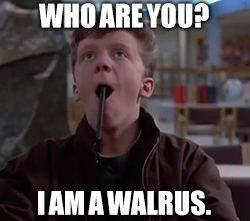 Uber and WeWork are old news in the IPO market. Ping Identity Holding Corp. (NYSE: PING) is the new hotness.

Ping is a cybersecurity firm that specializes in intelligent identity solutions — which would be really handy should body snatchers invade.

PING IPOd at an average price of $15 per share, and then went on to soar more than 30% on its first day of trading.

As you can tell, investors are impressed. The company has several big-name customers already, including Netflix Inc. (Nasdaq: NFLX) and GlaxoSmithKline PLC (NYSE: GSK).

Customers used Ping software to power multifactor authentication and secure logins. One has to think that with Netflix on board, you may finally have a way to get your ex to stop “borrowing” your account.

With identity theft a massive global threat — aliens have to hide somehow — Ping’s disruption of legacy identity management is poised to take market share from the big boys, such as IBM Corp. (NYSE: IBM) and Oracle.

Grand View Research forecasts the identity management market to grow to $24.12 billion by 2025. That’s quite the opportunity for Ping.

The weekend is here! (And there was much rejoicing … yeah!)

I’m assuming you already have plans, such as taking the kids to a sports-ball game, mowing the yard, visiting the in-laws. But I have a much better idea: Watch videos from the 2019 Total Wealth Symposium!

It truly is a better and more productive way to spend your weekend. The grass can wait. Your kid plays enough sports-ball. The in-laws … do I even need to go there? (No, you don’t!)

Yes, I know the Total Wealth Symposium was held a week ago … I was there. If you weren’t, and you didn’t live-stream the event (slacker), we’ve got you covered.