Sports Betting Is a Smart Investment

Just about everybody watches sports. And putting some money (responsibly, of course) on the line can make the games a little more interesting.

Fantasy sports, especially football, have taken America by storm. Every football fan is, or knows somebody who is, in a fantasy football league. Personally, I love the thrill of having my own set of players to root for competitively week by week. It creates interest in teams that I would otherwise never pay attention to.

But there’s an entire industry out there that’s being covered up. And that’s simply betting on sports matches themselves.

Back in 1992, the Professional and Amateur Sports Protection Act banned sports betting in just about every state. The only ones that have legalized it are Nevada, Oregon, Montana and Delaware.

Of course, this hasn’t done much to stop people from continuing to bet on their favorite teams. All it has done is shifted the way that it’s taken place. Now that people can’t easily make legal sports wagers, they’ve simply turned to illegal, underground methods. 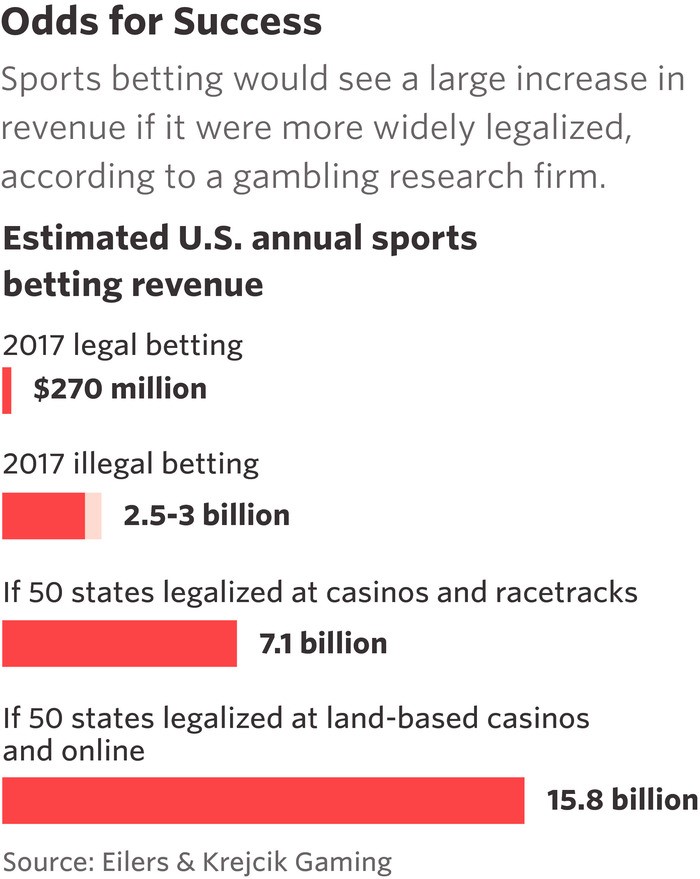 Obviously, there’s no good way to tell how much is being gambled illegally. As you can see, the chart above projects a $15.8 billion industry for this year.

And that’s just in the United States. Eilers & Krejcik Gaming, the firm behind those estimates, states that Americans could be betting as much as $60 billion per year using offshore websites as well.

But that’s on the very low end of estimates. In 2015, an estimated $95 billion was gambled on college and professional football games in the U.S. $93 billion of that, or 98%, was done illegally. Adam Silver, commissioner of the NBA, has stated that $400 billion is wagered on sports each year.

Even sports websites and channels like ESPN and CBS Sports regularly post the favored teams and the amount of points or runs that they are projected to win by, based on Las Vegas odds. It’s not a secret that a large percentage of the population is finding a way to bet on these games.

There’s an ongoing initiative taken by several states right now to legalize sports gambling. Sparing most of the details, the next big step in this process takes place on December 4. On that day, the Supreme Court will hear arguments for legalizing sports betting across the country.

There are 14 states waiting to hear the Court’s verdict that are willing to offer legal sports gambling within just two years. Another 18 are expected to make it legal within five years.

Obviously, this makes a good investment opportunity … if you look in the right places.

Remember, the smart money gets into trends before they become popular. Investing in an industry a couple of years before it hits its potential is not unreasonable.

People may not physically show up at these casinos to place their bets. But casinos will make new, easy ways to bet, whether it be through easy-to-use apps, websites or even through texting. They will be the ones taking all of the newly legal bets.