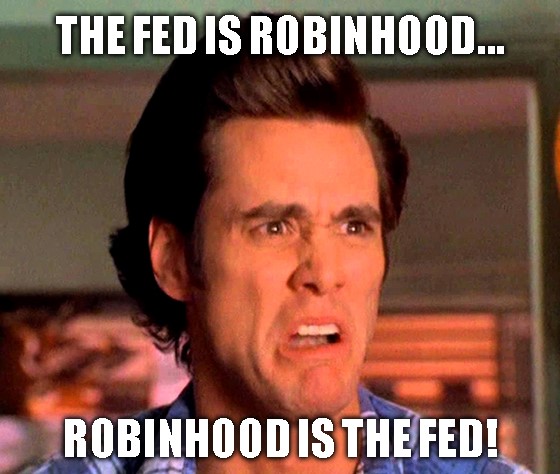 Did you see my little exposé on Robinhood’s infinite leverage problem yesterday?

If not, go and check it out now … it will help with today’s topic: the Federal Reserve and the repo market. Put simply, the repo market handles repurchase agreements, where big investors and fund managers lend out their idle cash — typically for short-term financing.

I know … I can hear you moaning about the Fed and the repo rate. They’re usually pretty dry topics. But this is different.

Ted Bauman, editor of The Bauman Letter, shared the following story with me yesterday: “What’s Behind the Fed’s Bailout of the Repo Market?”

In this article, Wolf Richter discusses how the Fed used to actively participate in the repo market up until 2008, but then quit doing so because it didn’t need to. The Fed’s quantitative easing (QE) measures were taking care of things. So, the repo market could be left alone.

However, when the Fed ended QE and started raising interest rates, the repo market got dicey again. So, the Fed stepped in by buying Treasurys and mortgage-backed securities. It also started purchasing Treasury bills. You can check out Wolf’s article for more details on both of these policies.

The biggest thing that stuck out to me, however, was just who has access to the repo market — and the low borrowing rates therein.

According to Wolf, banks have other means to secure cheap lending rates rather than rely on the repo market. But hedge funds, real estate investment trusts (REITs) and private equity firms? This is their bread and butter for low, low rates.

In its 10-Q filling, AGNC lists $106 billion in total assets, including about $93 million in mortgage-backed securities. However, AGNC only has $10 billion in equity capital. How does it fund its investments?

If you guessed the repo market … ding, ding, ding! You’re a winner. Wolf says this about the REIT:

During the six months period through June 30, the company cycled nearly $2 trillion with a T through the repo market, borrowing short-term, paying back the required amounts when the repos mature, and then borrowing again, constantly rolling over the increasing pile of short-term debt.

In short, essentially all AGNC’s investment capital is sourced from the repo market — you know, the same one the Fed is working hard to bail out right now.

If this borrowing, leveraging and borrowing again sounds familiar, that’s because it is.

This is nearly the exact strategy that WallStreetBets members stumbled onto with Robinhood this past week — constantly rolling over short-term debt (options in the Robinhood situation) to finance longer-term debt (or stocks).

When it comes to companies like AGNC, Wolf notes: “This is a corner of the financialized world that has nothing to do with the real economy, real investment, production, consumption, or jobs. It’s just some players trying to milk the financial system by taking huge leveraged risks.”

This exact sentiment — the milking of the financial system — is being pandered by the talking heads in the financial media when it comes to Robinhood traders and the infinite leverage situation. CNBC actually called them “psychopaths” last night.

Robinhood traders are individuals, after all, and must be shut down. Meanwhile, AGNC-like companies continue to speculate.

If the repo market dries up and no one is there to lend a few billion dollars to AGNC, the Fed comes to the rescue by actively dumping cash into the repo market.

As Ted Bauman put it to me: “The leveraging aspect is bad. But the worst thing about this particular episode is the fact that private companies are using a facility designed to stabilize the financial system to make financial profits that wouldn’t exist otherwise.”

So, the Fed will come to the rescue of private companies speculating with billions of dollars. It’s actively doing so right now. Judging from the billions the Fed is dumping into the repo market, someone is speculating on a massive scale … someone akin to Bear Stearns back in 2007.

But nobody — and I mean nobody — is going to bail out individual Robinhood traders … or you, for that matter.

Those traders are going to get squashed like bugs.

Analysts expected earnings of $1.16 per share on sales of $3.97 billion. Baidu also placed fourth-quarter guidance ahead of Wall Street’s expectations.

And yet, analysts continue to harp on the U.S.-China trade war and the slowing Chinese economy as detractors for these companies. But “slowing” is a relative term. China’s economy still grew by 6% last quarter.

It was clearly enough growth for Baidu to beat Wall Street’s targets. With BIDU shares down about 30% this year, the stock might be in bargain territory.

After the close last night, chipmaker Qualcomm Inc. (Nasdaq: QCOM) reported better-than-expected fourth-quarter earnings. Typically, that would be the headline story for any company during earnings season.

However, Qualcomm has investors buzzing about its guidance this time … particularly 5G telecom growth. The company said it expects to ship 1.85 billion units in 2020, including about 225 million 5G handsets as the technology begins to spread to all the major carriers.

On a call with shareholders, company president and head of Qualcomm’s chip unit, Cristiano Amon, called the 5G estimate conservative.

Qualcomm is clearly betting on a strong 5G upgrade cycle. And with the company’s renewed supply deal with Apple Inc. (Nasdaq: AAPL), it may be on to something.

There are right ways to spend money as a company and wrong ways. Right way: Reinvest in your company’s future for long-term growth. Wrong way: Make massive share repurchases when your company is in debt or struggling.

But investors are focusing heavily on Roku’s losses, which rose to $0.22 per share from $0.09 per share last year, and its updated guidance. Roku now expects 2019 earnings of $30 million, down from $35 million.

Losses are problematic (I’m looking at you, Nio), but losses for the right reasons are growth opportunities. Roku’s losses are centered around its $150 million acquisition of ad-tech company Dataxu. Furthermore, its lowered guidance was due to continued investment in its business and Dataxu operations and acquisition expenses.

Roku just saw ad revenue spike 70%, and now it’s reinvesting in this fast-growing revenue stream. That is how you’re supposed to spend money as a company.

The fact that Roku is getting punished for this very reason today is mind-boggling. It’s also another opportunity to add to your ROKU positions. Just wait … the holiday quarter is going to be big for Roku.

I should be careful what I ask you guys for. My inbox is exploding with big-time questions!

That’s a good thing, by the way. So, let’s get right to it. It’s Reader Feedback time.

Let’s start with Bob A., who wrote:

The last decade has been a great period for investors. Markets are now at all-time highs. According to your president, the country has never been in a stronger position. Members of Banyan Hill concur — recession is not on the cards. If everything is so rosy, why does the FOMC [Federal Open Market Committee] continue to reduce rates, and why is the GDP decreasing?

First, I wouldn’t say all members of Banyan Hill concur that a recession is off the table. Paul ? Certainly. Ted Bauman? Maybe not so much. We are a diverse group of personalities here at Banyan Hill, with equally diverse investment strategies and market outlooks.

As for the Fed reducing rates and falling GDP, I believe this is all tied to two things: global economic growth and the U.S.-China trade war. These two issues have created uncertainty in the U.S. markets, something Wall Street loathes.

This is clearly an oversimplification of the problem, but when businesses are faced with uncertainty, they pull back on spending … and pull back on growth. The U.S.-China trade war will eventually find a resolution — one way or another. This should put some pep back in the U.S. economy. As for global growth, Brexit is a major factor there, and that won’t be resolved until sometime next year.

Next up is Bob F. (why are there so many Bobs today?), who wrote:

You really hit the nail hard on the head. With the planet’s top investors eagerly lining up to buy into SoftBank’s Vision Fund, staggering losses from WeWork, Uber and, most likely, the Aramco IPO will indeed make them brake hard and stop to think again.

Thanks for Great Stuff.

Did you see that SoftBank took a $4.6 billion write-down on WeWork and posted its first operating loss in 14 years? What a mess.

Finally, me saying that China is winning the trade war pushed some buttons for more than a few of you.

Were you one of the millions clamoring for a POTUS with some sizeable cojones to stand up to the Chinese hordes? You were so critical of past administrations who talked a lotta B.S. promising this and that, only to cave to them when spotlights turned off.

Uh-huh, hardball international trade deals, like favorable NYC real estate deals, are best negotiated by those who “HAVE DONE IT and BEEN SUCCESSFUL,” and it damned sure ain’t easy!!

Umm … Bernard, I didn’t call it easy. President Trump did. But Great Stuff is winning so much, I understand your confusion.

Also, I’m critical of literally everyone. I don’t care who’s in office. Trump didn’t create this mess with China — it’s been there for decades.

I give him credit for trying to fix it — even if I sometimes make fun of how he’s going about it.

Making investments and managing your money based on political leanings doesn’t end well.

That’s Great Stuff’s goal, after all: inform, educate and entertain.