Outside of a few pullbacks, the stock market has been rallying for 10 years.

The S&P 500 is up a whopping 291%, and has greatly outperformed the bond market over that time period.

But for the first time in a decade, the stock market is about to face a challenge from the bond market.

Even though the Federal Reserve kept rates on hold Wednesday, a 25-basis-point hike at the June meeting is a given. That would continue the Fed’s measured pace of raise one meeting, hold the next.

Fed funds, the overnight rate at which banks lend to one another, are currently maintained at 1.75%. After the June meeting, this should climb another quarter point to 2%. The Fed intentionally telegraphs its rate increases and purposely sticks to the script, and this time will be no different.

The recent increase in rates has warmed investors to the bond market. A risk-free U.S. three-month bill can yield 2%. If you are looking to dodge stock market volatility, this is a safe place to park cash.

And as yields on the short end move higher, so goes the rest of the bond market.

Yields across the Treasury curve have moved up significantly in the past year.

After 10 years, the yield curve flattens. The longest dated maturity, the 30-year bond, only yields 17 basis points higher than the U.S. 10-year note at 3.12%, and the long bond has only moved up 12 basis points from a year ago.

Increasing bond yields are starting to give the stock market a run for its money, pun intended.

Since the stock market bottomed in 2009, stocks haven’t faced much competition for investment dollars. But the recent moves in bond yields could mark an inflection point for markets.

The End of TINA?

Wall Street loves a good acronym, and aptly dubbed the lack of competition for stocks TINA for “there is no alternative.”

Investors have quietly chanted TINA during every stock market pullback to remind themselves that they should hold on to their stocks because they aren’t getting a better return elsewhere.

This wasn’t a random occurrence. A decade ago, the Fed intentionally made bonds a bad investment.

Starting with Fed Chairman Ben Bernanke in 2008, the Fed orchestrated multiple rounds of quantitative easing (QE). This policy expanded the money base by purchasing longer-dated bonds (Treasurys and mortgages) from the banking system. This way, banks would get injected with much-needed liquidity.

The goal of QE was to make bonds a bad investment and force investors to take more risk. Bernanke believed that a rising stock market creates a “wealth effect” that would drive consumer spending and reinvigorate the economy.

And it wasn’t only the U.S. Fed. The European Central Bank and the Bank of Japan orchestrated their own rounds of QE. In doing so, global yields collapsed, and investors around the world were forced into riskier assets.

Through these aggressive purchases, bond prices rose. And yields, which move inversely to prices, declined to historic lows.

By compressing bond yields, investors were forced out of the safety of Treasurys and mortgages into corporate bonds, high-yield bonds and stocks.

As investors went hunting for yields and gobbled up riskier stocks, dividend yields dropped. The S&P 500 dividend yield, which also moves inversely to price, fell from 2.75% in 2010 to 1.92% today.

The recent move higher in interest rates is significant because, for the first time in a decade, the three-month risk-free yield has moved above the S&P 500 dividend yield

Risk-free rates are once again offering a competitive yield for investors. Quite simply, stocks are no longer the only game in town, and investors now have options.

In the past few months, U.S. equity mutual funds and exchange-traded funds (ETFs) have seen a gradual increase in outflows. Since the start of February, $72 billion has exited U.S. stock funds. 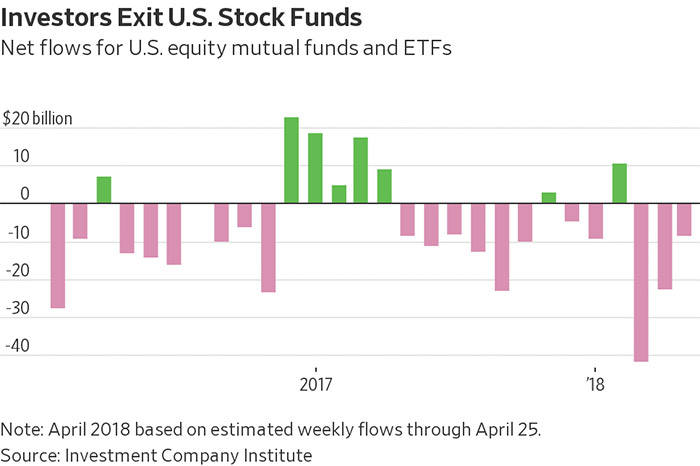 Stocks now have competition, and Wall Street needs a new acronym. Let me suggest one: BAAAA for “bonds are an alternative again.”

Editor’s Note: As someone who hates losing money, financial expert Ted Bauman designed his Infinite Nest Egg system to find safe investments when the stock market gets volatile. This rules-based system can help you grow your money 900% more than ordinary investing with almost zero effort. That’s more than double the gains over the last 10 years than you would’ve gotten from shares of Warren Buffett’s Berkshire Hathaway! To see how the Infinite Nest Egg system helps people just like you achieve — and maintain — fortunes, click here now.

Tariffs Are to Blame for the Earnings Season Struggles