Wall Street goes through phases. It seems like every year or two there is a new hot segment of the market that everyone is focusing on.

Whether it is alternative energy, dot-coms or FANG stocks, they garner a lot of attention, and then the excitement fades. Not that there aren’t some great returns to be had … but there is a cycle to the excitement.

Remember the acronym BRIC? It stands for Brazil, Russia, India and China. That was the hot market segment a few years ago. One area of particular interest from the BRIC phase was Chinese internet stocks.

Between 2012 and 2014, it seemed like there was a new initial public offering (IPO) for a Chinese internet company every month. And there were some great success stories launched during that time period.

Most of the stocks jumped right after they went public and then died down a little. Then we saw them take off again from mid-2016 until early this year. Most of them have now pulled back over the last few months, and the charts almost all look the same.

This could be great news, as the patterns they are showing look very familiar. If they play out like they did the last time around, we could pick up 100% gains on three of these stocks in the next year.

A Repeat of the Pattern Would Mean 100% Gains, Or Even More

One of the greatest benefits to technical analysis is recognizing patterns that repeat again and again. If you find one that is reliable, it can make you lots and lots of money. And I think there is a pattern in three Chinese internet stocks — Alibaba Group Holding Ltd. (NYSE: BABA), Weibo Corp. (Nasdaq: WB) and YY Inc. (Nasdaq: YY).

I first noticed the pattern in December 2016, and now it is finally setting up again.

Two very useful tools I have found for fundamental analysis are from Investor’s Business Daily. They are the earnings-per-share (EPS) rating and the SMR rating.

The EPS rating measures how a company’s earnings are growing versus all other publicly traded companies. The scores range from 1 to 99, with 99 being the best.

The SMR rating is a letter grade between A and E. The SMR measures the company’s sales growth, profit margin and return on equity. The best rating is an A.

These aren’t terribly difficult tools to use, and they give you a quick, fundamental snapshot of how the company is doing compared to other companies.

Looking at Alibaba, Weibo and YY, all three rank very well under the Investor’s Business Daily tools. They have EPS ratings of 96, 99 and 98. All three receive A ratings in the SMR rating system.

We are looking at three stocks that are growing fast and are fundamentally sound companies based on these ratings. Now we can take a look at the charts of the stocks.

Rather than show you all three charts, I will show you the weekly chart for Weibo. 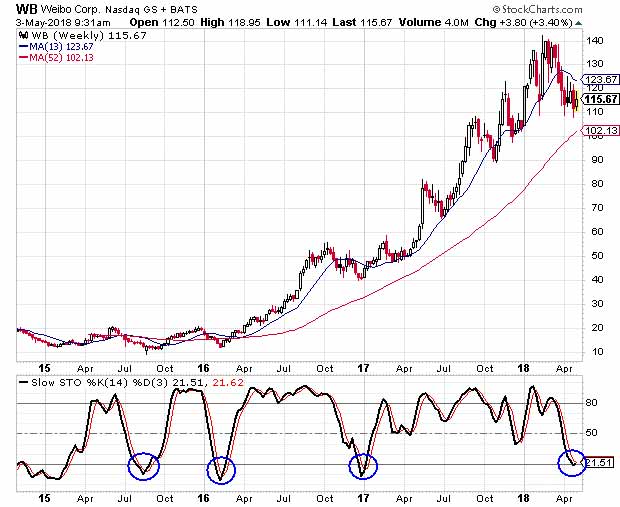 We see the incredible move higher over the past few years. We also see the three blue circles where the weekly stochastic readings made a bullish crossover.

The stochastic readings are simply an overbought/oversold indicator, but they can be very useful for the forward-looking aspect. See how each of the bullish crossovers came at lows in the stock, and how the stock rallied sharply in each instance?

The weekly charts for Alibaba and YY look very similar. The stocks have been trending higher for several years. They have stalled slightly in 2018, and have seen the stochastic readings move to oversold levels.

All three are also still above their respective 52-week moving averages. Alibaba and YY did both move down and touch the 52-week, where Weibo has yet to touch its moving average.

From late December 2016 through the February high, Weibo gained over 250%. YY gained over 275% in the same time period, while Alibaba gained 139% from its low. And that isn’t the only big move these three stocks made.

From the February 2016 lows to the September 2016 highs, YY gained 83%, Alibaba gained 85% and Weibo gained an incredible 330%. I think all three are getting ready to take off again.

Personally, I think all three of these stocks have turned in their lows for this pullback, so I wouldn’t wait any longer.

I like Weibo the best of the three simply because it has performed better overall and the EPS rating is a tick better than the other two. I also wouldn’t be afraid to buy all three stocks and ride them all higher for the next nine to 12 months.

If the pattern from the stochastic crossovers plays out again, the stocks should post huge gains.

But you can’t fret over not getting in at the exact low, and you shouldn’t worry about trying to get out at the exact high either. If we see a 137% move higher and you only capture 120% of the move, are you going to be upset? I hope not. 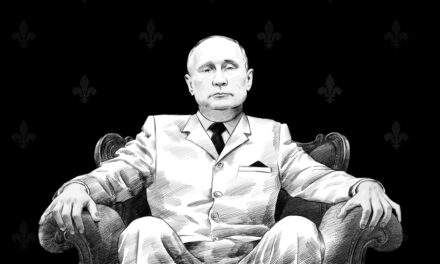 This New Tool Could Change How You See Earnings Season