Maybe the ultimate goal is to get rich, or generate extra income to live on.

But most active investors just seek to outperform the market.

After all, if you are not buying an S&P 500 Index fund, and instead cherry-pick trades either by a strategy or by particular stocks, your grade is based on whether or not you beat the basic benchmark, which is the S&P 500.

This is measured by what is called alpha — the excess returns of a fund relative to the return of a benchmark.

In February, I wrote an article called “Beating the Average” that showed you how to do just that — beat the average.

Today, we are going to see how we did.

In February, markets were still happy about the election, but as I noted and displayed on a Relative Rotation Graph™ (RRG), there was a shift happening in the market.

Basically, what worked since the election was starting to fade, and the unloved sectors were gaining some ground. I even gave you what to be overweight and underweight in:

You will want to have more exposure to sectors that are improving — real estate, utilities, consumer staples and health care. These sectors have been lagging and are starting to improve, meaning momentum is picking up, and, relatively speaking, the sectors aren’t underperforming as much.

The sectors you want to limit your exposure to are the ones that are weakening — financials, energy and industrials. These are sectors that have been — and still are — leading the market. But their momentum is fading, and they could soon fall and lag the market.

Here’s how they performed: 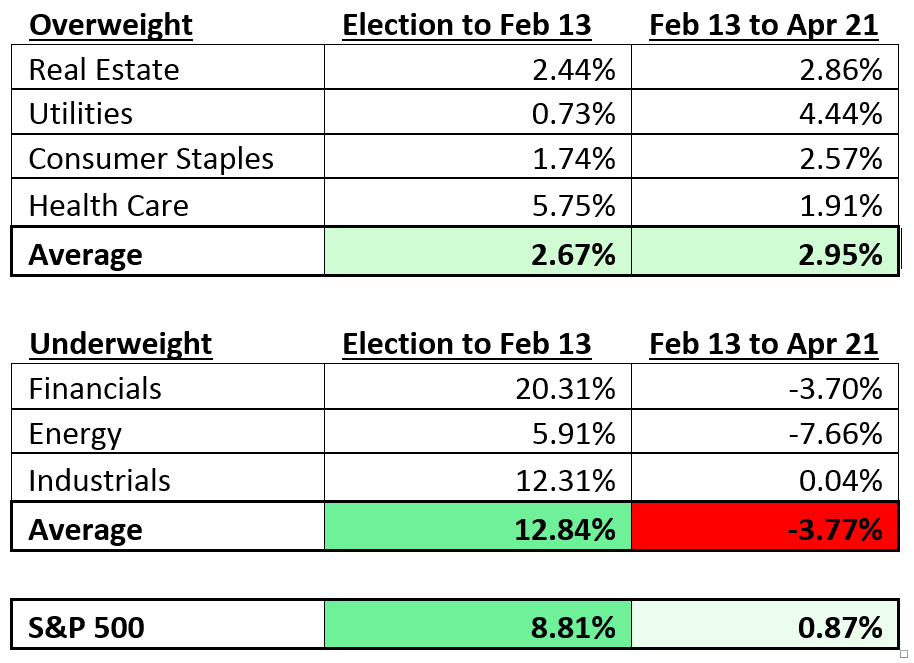 Clearly the relative rotation was a great indicator for generating alpha — which is exactly what it was designed to do, after all.

Let’s take a look at how things are today with an animated RRG. (If the animation doesn’t load properly, you can see it here instead.)

Since then, we have basically seen the rotations continue, but there are some interesting sectors to point out. Take a look at this still shot of the RRG: 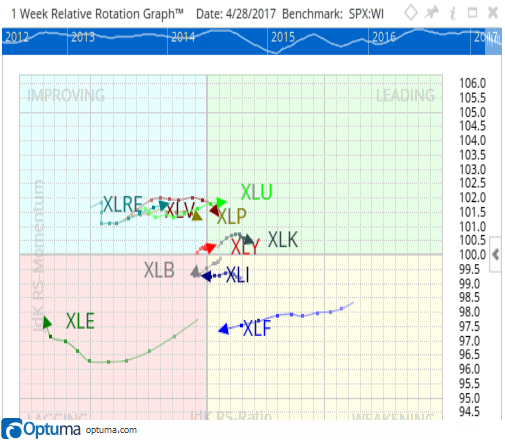 You will notice that energy (XLE) and financials (XLF) are still lagging or trailing the market. Industrials (XLI) just entered the lagging quadrant as well.

The sectors that have been leading are health care (XLV) and consumer staples (XLP). While both of those are in the improving or leading quadrants, they have turned lower. This could be an early sign that they’re beginning the rotation to the lagging quadrant; however, utilities experienced a similar dip lower before regaining strength, so it is something to keep an eye on.

For now, you can remain at the same weights as before. I could add materials and consumer discretionary to the overweight category, but I’d like them to be further from the index (the center) at this point.

Overall, we have seen the rotation I expected over the last two months, but the rotation cycle will continue. That means the stocks that are lagging now will eventually be leading … but we are not quite there yet.

The Danger of ‘Black Velvet’ Stocks