Last week, I had a flashback moment. I flashed back to October 3, 2000. To most of you, that date probably means nothing, but let me explain.

While driving home on March 19, my phone pinged, and it was a notification from Yahoo Finance. (Don’t worry, I was at a stoplight when I checked it.) The notification was that Oracle Corp. (NYSE: ORCL) had missed its earnings expectations, and the stock was down 7%.

I reflected back on another earnings miss from Oracle. It was in October 2000, and it kind of signified the beginning of the bear market to me.

Sure, the volatility had started earlier in the year, but it was that earnings miss that got my attention more than anything.

In 2000, there were a group of stocks that were referred to as the Four Horsemen of the Nasdaq — Cisco, Dell, Intel and Microsoft.

Oracle wasn’t one of the four, but if there had been a fifth, it would have been it. Those five stocks and a few others had been the driving force behind the meteoric rise in the Nasdaq. Having one of those stocks miss on its earnings forecast was a red flag.

Oracle fell 11.7% after that earnings report in October ’00, and the S&P 500 fell below its 52-week moving average that week. The S&P wouldn’t move back above the moving average until April 2003. 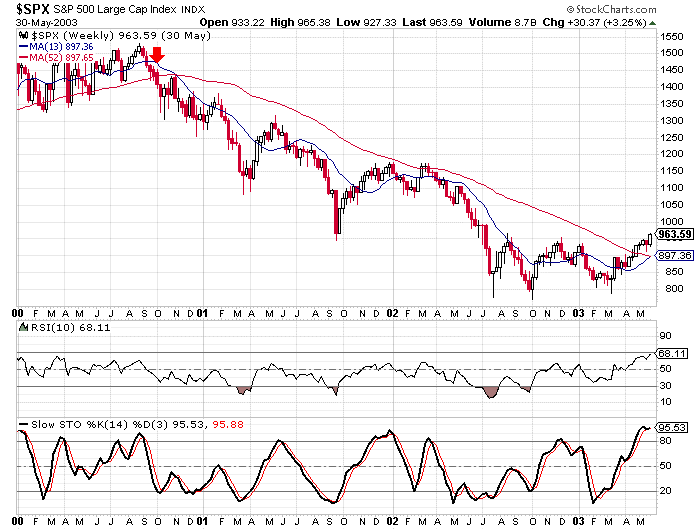 Jump ahead 18 years and we have the FANG stocks (Facebook, Amazon, Netflix and Google/Alphabet) leading the charge higher. If there was a fifth member of FANG, it would be Apple. The FANG stocks have taken over for the Four Horsemen and have led the move higher in the last few years.

What If a FANG Stock Missed Its Earnings Estimate?

Because Oracle missed its earnings forecast, I started thinking about the huge bull market we had in the late ‘90s. I started comparing it to the bullish run we have been on for the last nine years.

I also started thinking about what would happen if one of the FANG stocks issued an earnings report like the one Oracle did in 2000. How badly would this hurt the market? The gains in the market in the late ‘90s into 2000 were similar to the gains we have seen in the last couple of years.

We are getting ready to enter another earnings season in the next few weeks. All of the FANG stocks and Apple will report between April 16 and May 1. With the exception of Amazon, expectations for year-over-year growth are high. They range from 20.7% for Google/Alphabet to 60% for Netflix.

With such lofty expectations, it becomes harder to impress investors. We experienced a little increase in volatility in January and February, but for the most part, the bulk of investors are still bullish.

As for the FANG stocks and Apple, the overall sentiment is very bullish. The short interest ratios are all below 1.75 with the exception of Netflix.

Does the bullish sentiment mean that the stocks will go down? No. It just means that if any of the companies issue disappointing earnings reports, the downside move could be huge.

If everyone is bullish on a stock and has already bought the shares, there are only sellers left. And with so many analysts in the bullish camp, a downgrade is far more likely than an upgrade.

I’m not saying any of these companies are going to miss their earnings estimates. I’m just telling you that the stock will drop sharply if they do. With the extreme bullish sentiment, it wouldn’t have to be a big miss either.

If you own shares in any of the companies, you might consider buying protective puts on the stock as insurance.

A protective put strategy suggests that you buy a put option for every 100 shares of the underlying stock you own. If you own 500 shares of AAPL, you would buy five put options to protect your investment.

If the stock falls in price after the earnings report, the options would gain in value, thus insuring your portfolio against a big loss.

This Chart Is Warning of a Bear Market