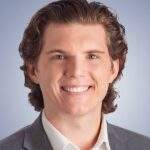 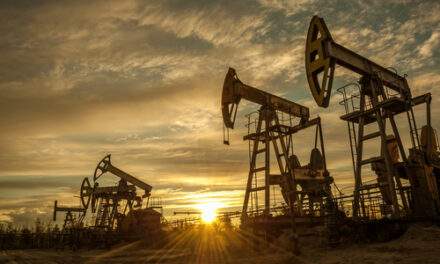 Welcome back to another brand-new Options Arena, our weekly battle of the brains between the top options traders in our business.Here you get to see what each of our gurus thinks of a red-hot investing topic, and decide which idea should come out on top.This week, we’re talking about one of the few outlier assets charging forward while the rest of the market slumps…Liquid gold… crude… petroleum… whatever you call it.That’s right. The gooey black stuff that — like it or not — powers virtually everything in modern society: Oil.Our team was actually quite unified this week on what could happen next for oil… But they each had different ways they think you should play it.As always, be sure to read to the end and vote on which Options Master you thought had the best idea. Last week Amber Hestla once again came out on top… but with our newest entrant to the Arena, Chris Cimorelli, coming in at a respectable second place: 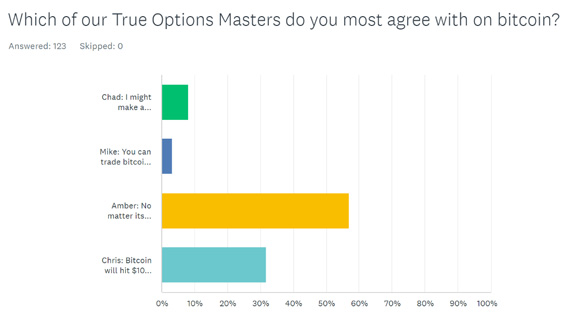 And now, let’s hand it over to our experts!

Chad: The Upside Move Has Played Out

Oil is all over the place. Yes, it was on a tear the past two months, but that was after it dropped 17% in just over a month.And looking at oil on my Profit Radar, the upside move has played out. It helped us nail the rally we’ve seen in oil stocks. Now it’s time to get bearish on oil and look to profit from a pullback.An easy way to play this is with a put option on the Energy ETF (XLE) dated out to February 18 to cover the pullback.

Mike: An Oil Decline Is Imminent

Oil prices are likely to be lower six months from now. Global economic demand is slowing. The Baltic Dry Index (BDI) dropped 72% in less than four months and no one noticed. This obscure indicator tracks the price of moving raw materials by sea. That makes it a leading indicator of economic activity, since raw materials are the first step in the manufacturing process.The BDI is now back to levels associated with a normal, slow-growing economy. Demand for oil should also return to normal, limiting its upside. Oil currently has a volatility premium, largely associated with Russian military maneuvers. Even if Russia invades the Ukraine, traders will gradually reduce that premium, since the U.S. won’t impose sanctions that raise the price of gasoline.The trade here is ProShares UltraShort Bloomberg Crude Oil (SCO). I don’t like to buy the ETF because its structure creates additional tax forms. Trade call options on SCO instead. July $9 calls are priced under $3 and could double as oil prices drop. SCO is volatile and almost always moves up at least 10% within 3 months. Using July calls provides an ample time to benefit from the normal volatility in the market. It also offers exposure to the coming decline in oil as traders realize demand is falling. 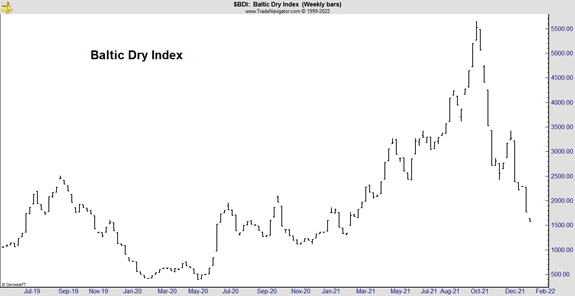 Amber: The Data Behind the Data Tells Me Demand Is Falling

When I was much younger, I was an intel analyst in the military. We searched for the “data behind the data.” In other words, if we saw 100,000 Russian troops massing on the Ukrainian border, we looked for how many fuel storage facilities were nearby. To invade, troops need lots of fuel close at hand.As an investment analyst, I apply the same approach. To understand the price of oil, I look for data driving the price action. That’s demand and supply. Oil can’t reach $100 a barrel if demand is dropping — and it is. China’s demand drives price trends. Since 2015, China accounted for 44% of the change in demand. In 2021, China’s oil imports dropped 5.4%. And experts expect China’s demand for electricity to decrease this year. At the national level, electricity is a proxy for economic growth. With growth slowing in China, demand for oil will drop and that will limit price gains.While the trend is down, there will be spikes. A fire in Turkey, the Ukrainian crisis, Iran, and other issues could push prices up. Trade this with options on iPath Pure Beta Crude Oil ETN (OIL) using a 20-day moving average. I’ll have full details in my next TOM daily if I get the highest number of votes in the poll at the bottom. 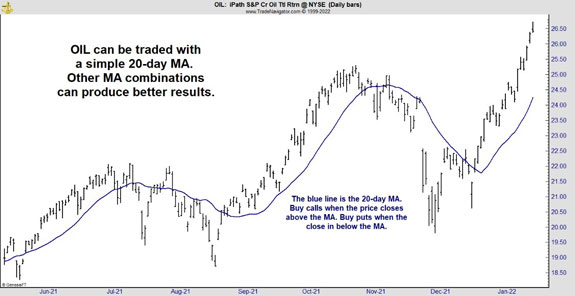 Chris: Don’t Fight the Trend, but Expect a Short-Term Drop

I gotta be honest… I love my gas guzzler. I’ve made a lot of money trading and speculating in electric vehicle stocks. But I like the roar of the internal combustion engine too much to make the switch just yet.When it comes to oil, I say over the medium to long term: Don’t fight the trend. Oil is showcasing an extremely bullish megaphone pattern right now — with higher lows and higher highs — that shows it will clearly soar to $100 and beyond. 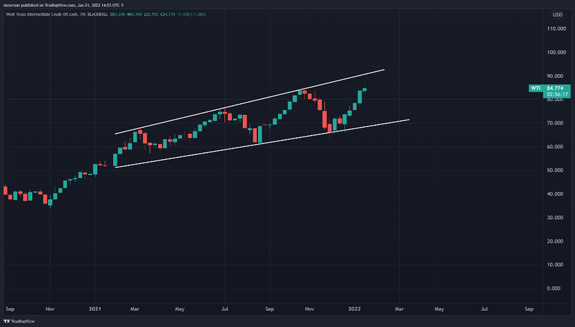 That said, it’s at the upper end of its trendline. So right now, I’d buy a put. If you’re more conservative, you might want to wait to confirm resistance at the trendline. But if you want to go for it, I’d recommend buying the 2/18 Exxon Mobil (XOM) $65 put option.I like Exxon Mobil for this trade because it largely trades in line with the oil market, but after going up each day for a week straight the first week of the year, its momentum looks to be stalling out. If I had some money to play with, I’d bet on a short-term reversal. 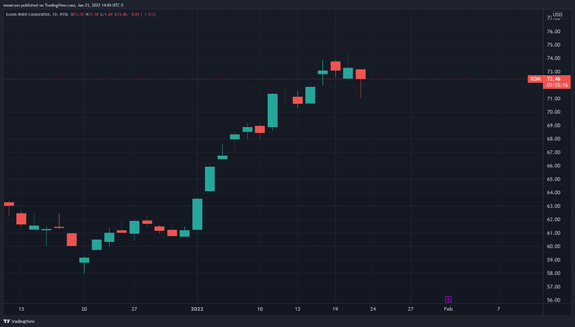 This option is out of the money and will require a 10% move in the stock to make money. That may sound like a lot, but oil stocks are volatile, and the stock is up roughly 25% in the past month. Since oil is at the peak of its trendline, I think a short-term reversal of 10% is quite likely over the next month. But after that, it will probably go higher.

That’ll do it! You’ve heard our experts’ opinions on the next move in oil. Now, it’s your turn…Which of our experts do you most agree with? Click the image below to vote for this week’s winner! 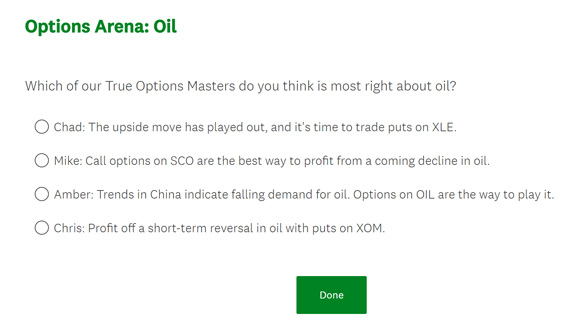 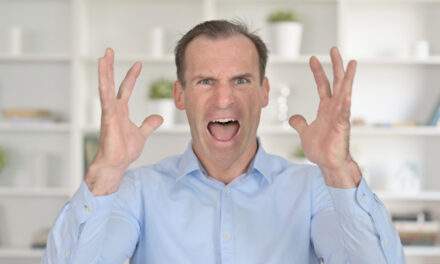