The Pundits Are Wrong About Oil

In the past few weeks, the price of crude has dropped like a sinking oil tanker.

Oil prices fell so sharply that it wiped out all the gains posted by crude since the start of the year. And now, at long last, the market pundits are telling you to get bearish on oil and energy stocks.

In fact, stocks leveraged to the price of oil are poised for a nice rally here.

I’m not saying that oil will only go up from here. There are plenty of bearish forces in the market. But the action in stocks is telling us to put on our rally hats.

U.S. oil production is soaring. Output rose by almost 850,000 barrels a day between August and November. And then it kept on climbing.

Now, America’s oil output has passed that of Saudi Arabia. Soon, we may pass Russia. Whoa!

This weighs on the market. And prices could tumble if projected global oil demand growth doesn’t materialize.

Meanwhile, estimates of oil demand keep rising. But not as fast as oil production. According to the International Energy Agency (IEA), demand in 2018 should hit 100.4 million barrels per day.

Supply is likely to keep up due to surging production in America’s shale oil basins.  In fact, the oil rig count rose by 26 to 791 for the week ending February 9.

And this has the IEA and others warning of a “new oil glut.” This convergence of forces is what pushed oil prices lower in the past couple weeks.

My Supercycle Investor subscribers rode that trend with shares of the ProShares UltraShort Oil & Gas ETF (NYSE: DUG). It’s an exchange-traded fund (ETF) that is double-short a basket of oil industry stocks.

But on Monday, I told my subscribers to bank nice gains on DUG. Why? Because even as the IEA and other analysts are preaching doom for oil, oil stocks are telling us another story. 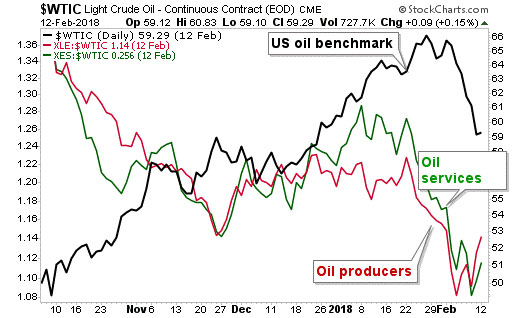 You can see that oil is continuing to lower. But both the broad XLE and the more focused XES have put in bottoms. Heck, they’ve put in double bottoms.

So, it’s fair to say the oil doom-meisters suck at throwing the chicken bones. Oil industry stocks are about to head higher. And stocks usually lead the underlying commodity.

Now, I’m not saying it’s THE bottom. But it’s certainly A bottom. A tradeable bottom.

And there are bullish forces out there for oil.

I believe you can ride either of the funds I mentioned — XLE and XES — higher in this rally.

If you like leverage and can stomach the risk that goes along with it, there is always the ProShares Ultra Oil & Gas (NYSE: DIG).

Just remember to take profits in a timely fashion.

Bulls and bears can make money. My Supercycle Investor subscribers have been showing that with both hands. But as the old saying goes, pigs get slaughtered.

Editor’s Note: We’re now entering the “liftoff” phase with cryptocurrencies, where we will see cryptos balloon from a $707 billion market to a $7 trillion market. Wall Street is just now getting in on the action … and you can reap massive gains if you move quickly. To learn how a new, patent-pending strategy navigates the crypto market to hand investors the biggest cryptocurrency gains yet, simply click here now.

Gasoline Has a Dirty Secret, and It’s Making Investors Rich

A Stealth Bull Market in a Critical Metal