Gasoline Has a Dirty Secret, and It’s Making Investors Rich

I just filled my truck up with gasoline. I paid nearly $2.60 per gallon, which feels expensive to me.

It’s hard to believe that prices this summer were the highest since 2014. We’ve had nearly four years of low gasoline prices … or what feels low.

However, based on the oil price, we’re paying more for gasoline now, on a relative basis, than we did back in 2008.

Quite a bit more. That makes me think there is an opportunity for investment.

Let me show you…

Something Odd Is Going on With Gasoline

However, something odd is going on with the gasoline price. We can see it from a simple comparison: by how many gallons of gasoline can we buy with one barrel of oil.

In theory, that ratio shouldn’t change much. However, as you can see from the chart below, something isn’t right with the gasoline price. As oil prices fell from 2008 to the present, the price of gasoline got more expensive relative to the price of oil. 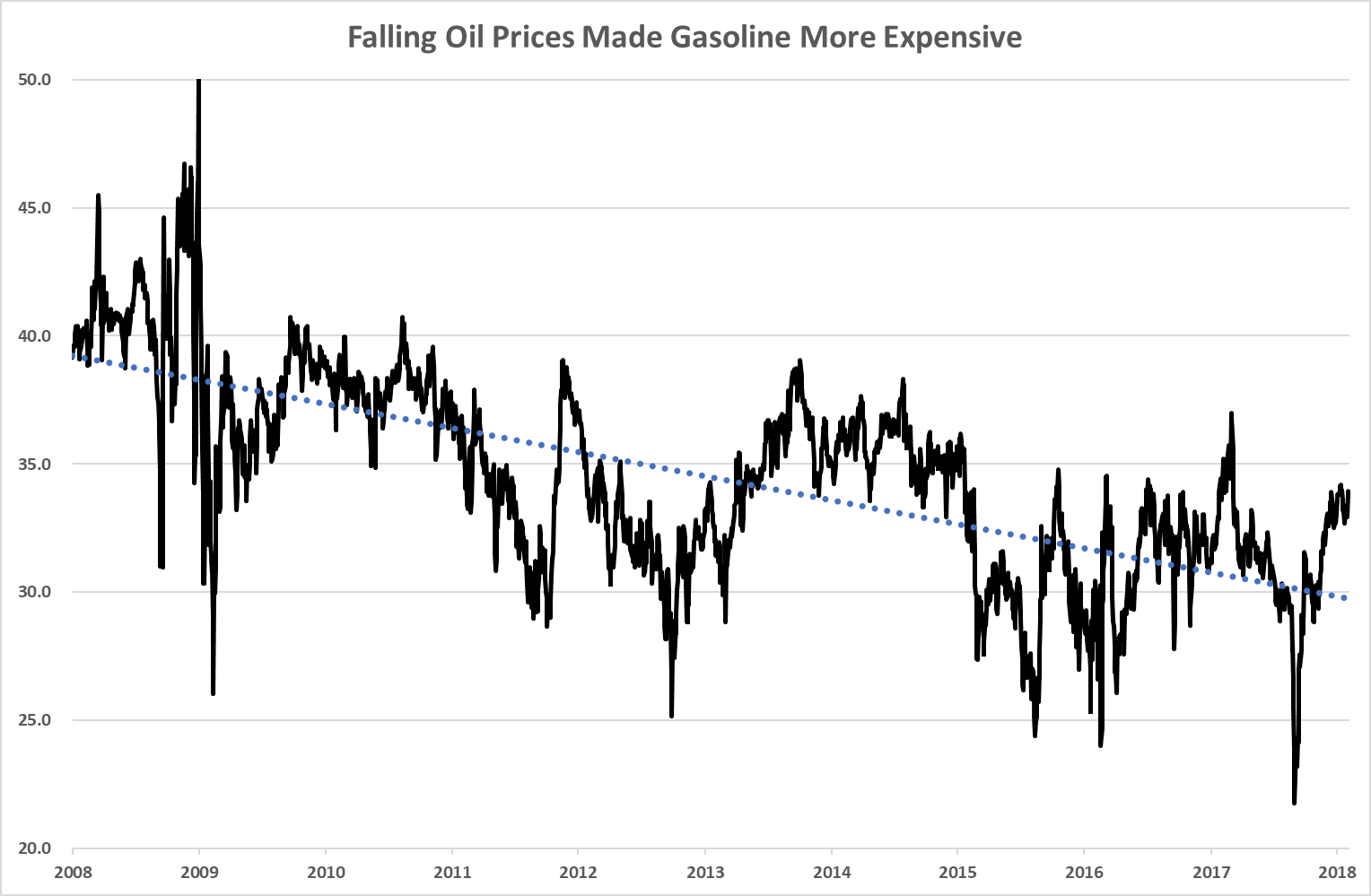 The chart above uses West Texas Intermediate oil prices and East Coast (New York) regular gasoline prices. You can see there is a definite trend down from left to right. That means gasoline got more expensive relative to the oil price.

Prior to 2017, the price of oil made up 62% of the costs of gasoline. But back in 2009, it took 50 gallons of gasoline to pay for a single barrel of oil. Considering that there are only 42 gallons in a barrel of oil, something was off.

When oil prices soar, refiners have a hard time making gasoline at a profit. That’s because as gasoline prices rise, consumers conserve.

In 2009, the U.S. saw the fewest miles driven since 2003. That forces refiners to keep the cost of gasoline low, even while paying high prices for oil.

However, as oil prices fell into 2016, refiners made up ground by gouging consumers. They charged more for gasoline … sending the ratio down and profits up.

Today, we’re seeing something similar happening. As oil prices contract down from a recent high of $66 to $60 and lower, we can expect to see gasoline prices move downward more slowly. That means refiners will probably do well this year.

The VanEck Vectors Oil Refiners ETF (NYSE: CRAK) is up 63% from its low in 2016. However, the sector should continue to do well. And the recent pullback makes the refining complex look attractive today.

If you want to put money to work in oil without direct exposure to the oil price, that’s a good choice today.

The Pundits Are Wrong About Oil