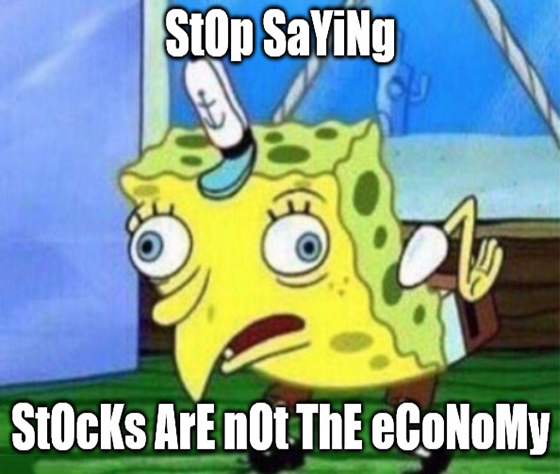 I have a bone to pick today, dear reader.

Now, we’re all tired of the disconnect between Wall Street and Main Street. With the U.S. unemployment rate above 10% due to the pandemic, some of us more so than others.

There are valid reasons for this. First and foremost is that Wall Street looks forward. The markets trade on projections. If investors think that earnings and revenue growth are improving (and will improve further), they buy more. If they think that those factors will decline, they sell or buy less.

The best example of this is the 2008 market crash. When stocks took a nosedive, the economy still roared. The financial malaise that led to the collapse of Bear Stearns and the like hadn’t yet affected Main Street America.

But Wall Street knew that it would, so stock prices plummeted.

Today, I read comments from an economist who’s tired of hearing “stocks are not the economy.” In a research note, Neil Dutta, head of economics at Renaissance Macro Research opined that: “…reality, of course, is more nuanced.”

Here are a few highlights from that research note:

This all seems rather reasonable, doesn’t it? The argument is well laid out and seemingly founded on solid market tenants.

But there’s one rather large problem here: The economy is only accelerating relative to this year’s pandemic-driven bottom. It is not accelerating compared to last year.

Take this past earnings season, for example. Some 86% of S&P 500 companies beat earnings expectations in the second quarter. That sounds extremely impressive, right?

It is … until you realize that those expectations were gutted due to the pandemic. Companies beat extremely lowered expectations. In other words, the U.S. economy is performing better than Wall Street’s worst-case scenario.

Don’t get me wrong. This is good news. The economy is recovering … for now.

But, as I’ve said in Great Stuff for some time, beating lowered expectations doesn’t support the all-time highs we’re at right now. It’s like Wall Street hands out participation medals or something.

Let’s give credit where credit is due. We owe these high asset prices to the Federal Reserve’s unlimited stimulus. It really is that simple.

So, while many economists and market watchers may be tired of hearing how stocks don’t represent the economy, this platitude has rarely been truer than it is right now.

Yet even if stocks don’t represent the economy … you still have options. Don’t let uncertainty and the Wall Street disconnect fool you otherwise! 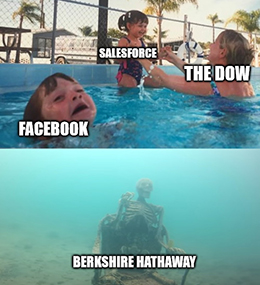 Shakedown. Breakdown. Takedown. Everybody wants into the crowded Dow.

Thanks to Apple Inc.’s (Nasdaq: AAPL) four-for-one stock split, the Dow Jones Industrial Average’s weighting was busted. So, the lovely people who maintain the Dow’s weighting had to scramble for replacements. Most of the replacements make sense.

Honeywell International Inc. (NYSE: HON) is back in. Raytheon Technologies Corp. (NYSE: RTX) is out.

Salesforce.com Inc. (NYSE: CRM) is in, and Exxon Mobil Corp. (NYSE: XOM) is out. Honestly, does the Dow need more than one oil company? No.

But this is where the contention comes in. Salesforce?

Many Dow watchers expected Facebook Inc. (Nasdaq: FB) to join the Dow. Facebook is much more profitable than Salesforce, after all. It’s also much more widely known and held by institutional investors.

Why? Because Facebook represents the U.S. economy right now.

Will Facebook be around in 10 years? 20 years? Probably. But given that generation Z has basically shunned the company’s social media platforms, I expect Facebook to be a shadow of its millennial- and boomer-driven self.

Meanwhile, Salesforce has tapped into a technology market that is not subject to generational whims or fads, and the folks in the know have decided that is more Dow worthy.

What stock do you think should’ve been in the Dow? Unless you suggest Crocs Inc. (Nasdaq: CROX), let us hear it: GreatStuffToday@banyanhill.com. 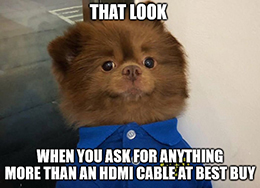 And you thought big-box stores were dead…

Best Buy Co. Inc. (NYSE: BBY), one of the biggest big-box stores to ever exist, just killed it with its second-quarter report.

And if that wasn’t enough, the company also said that third-quarter results would grow compared to last year, despite the pandemic.

So why did BBY stock fall today?

Both of these points should’ve been painfully obvious to investors.

Sales were juiced by stimulus cash and a splurge on work-from-home equipment purchases. Expenses declined in the second quarter because Best Buy didn’t have to pay as much for labor due to store closures.

That said, solid growth is still there … it’s just not the stimulus-doped growth Wall Street expected for some reason. In other words, BBY stock’s decline today may be a buying opportunity for anyone looking to invest in an outperforming retailer that knows how to weather a storm.

Best: Caffeinated, and It Feels So Good 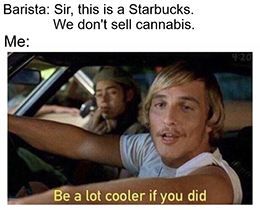 Most of us bet on tech companies and online retailers to weather the pandemic. Practically no one had bet on restaurants due to nationwide closures.

No one expected the Starbucks Corp. (Nasdaq: SBUX) inquisition! Its chief weapon is surprise, technology and surprise! Its two chief weapons are technology, surprise and ruthless efficiency!

Analysts at Stifel upgraded SBUX from hold to buy and lifted their price target from $78 to $90. Their reasoning? Starbucks is seeing same-store growth due to its loyalty program, curbside pickup and new store formats that better accommodate customers amid the pandemic.

“Despite its size, Starbucks has been able to accomplish this feat better than almost anyone in the restaurant industry,” Stifel noted.

To Starbuck’s credit, the company was always more of a drive-thru operation than a “sit in the store and hang out” restaurant. Sure, people loved chilling at Starbucks, drinking coffee and chewing through free Wi-Fi.

But the real deal was always Starbuck’s sugar-bombed caffeine. And that’s easily acquired through a drive-thru window … and easily ordered and paid for online.

Technology and caffeine. Name a more iconic duo, I dare you.

Much like the parable of the blind men meeting an elephant, our Quote of the Week spotlights an industry with a many-sided story … depending on how we interpret it.

I hope you’ve got your chips cashed in, because Great Stuff is truckin’ like the do-dah man.

Jonathan Pertchik is the new head honcho at TravelCenters of America Inc. (NYSE: TA), as of late last year, running chains of truck stops that offer everything you need while on the road.

Whether you’re a trucker like most of its clientele, or just a traveler fleeing the four-walled fury, TravelCenters’ locations offer refueling, rehydrating and full servicing (depending on whom you ask).

Truck stops were hardly anyone’s go-to portfolio pick for the pandemic … or even outside of the pandemic. Yet, as with Starbucks, it’s Great Stuff’s picture-perfect insight into how businesses can play their own specific game just a little bit smarter to outlast the chaos.

TravelCenters saw a boom as shipping and online shopping increased, with throngs of truckers out on routes that suddenly lacked their usual restaurants and pit stop alternatives.

[CEO] Pertchik has also overhauled TravelCenters’ purchasing procedures. Rather than buying fuel in 30-million-gallon increments, the company’s new head of fuel purchasing is now looking to put in an order for 750 million gallons, achieving a bulk discount.

Yet, where one corner’s cut, another closes, as its full-service restaurants were deemed nonessential at the pandemic’s onset. The thing is … this actually boosted TravelCenters net income by 78.3%. Here’s Pertchik’s own thoughts on the company’s restaurant business:

COVID-19 helped teach us that we were really poor as owners of full-service restaurants.

Now, I first chose this quote because I love the honesty. But, it’s this honesty that made me respect Pertchik as a CEO: If you know you’re the problem, get out of the way. If you can’t fix a problem, pay someone who can. Any CEOs come to your mind on that front?

Even before the COVID-19 closures, TravelCenters was in the midst of a much-needed turnaround, with operating expenses growing at a profit-destroying 7% a year. Here’s Pertchik again:

It did not seem like prior management had control over their site-level operating expenses, which are nearly $1 billion a year.

The key takeaway: For every business, from tech tops to truck stops, the pandemic is the great eye-opener on how to play your hand better, and when it’s better to just fold up. But either way, the cards ain’t worth a dime if you don’t lay them down.

Are you a road-bound trucker or traveler? Have you ever invested in truck stops … or another under-the-radar pandemic pick?

We’d love to hear from you at GreatStuffToday@banyanhill.com. And if you’d like to see more industry spotlights like these, let us know! We’ll take a better look at this sector and many more to come.

I sense a Great Stuff field trip up ahead!

OK, I know we were just talking about you writing in to share your thoughts with us on pandemic-proof businesses. (Wait, you’ve not sent that email in yet, have you?) But we’re not done with that whole “write to us!” song and dance just yet.

This week, we’re planning for an even deeper dive into the discordant chaos we call our inbox. Think of it as your chance to ask us anything about the markets, investing and all assorted stock drama sagas. Or, just send us a jolly “howdy do!”

Once again, that’s GreatStuffToday@banyanhill.com for any questions to ask and greatness to bask in. We’d love to spotlight your email soon! 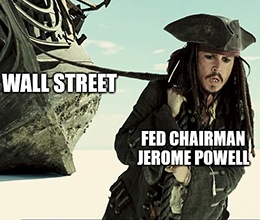