Marijuana was once completely legal in the United States.

The plant was used in most of our medicine. The Jamestown colony actually required its citizens to grow hemp. The police could arrest you for not growing it. Marijuana was even George Washington’s primary crop.

Then people began smoking it. Fearing violence and corruption, the government outlawed it.

Now, over 100 years later, states are legalizing marijuana again so that it is regulated and taxed like tobacco and alcohol. And it’s being legalized not just for medicine, but for recreational use as well. Savvy investors now have a new, highly anticipated market. 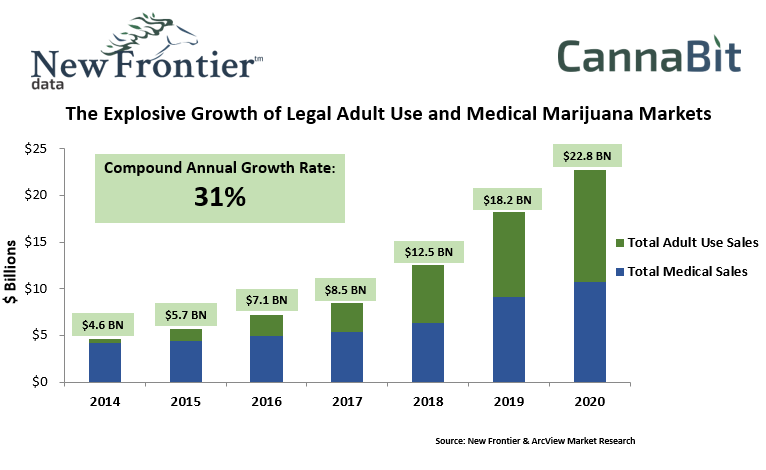 North Americans spent an estimated $53.3 billion on marijuana in 2016. However, about $46 billion of those sales were illegal. As more states continue to legalize marijuana, the legal sales will continue to snag market share. In 2016 alone, nine states declared marijuana legal, four of which for recreational use.

Right now, only nine states allow recreational marijuana use. That means the numbers in the chart above could be vastly underestimated.

As it becomes legal in more places, we will see sales surpass what they would have been if it were illegal.

Whether you agree with marijuana’s legalization or not, it is a growing market with ample opportunity to make some amazing profits. This industry could see expansion as more people use it due to its legal status and fading stigma. The open market will also work to lower the price.

As it becomes legal in more places like alcohol and tobacco, there will surely be more investment opportunities ahead for traders to make some impressive profits.

I’d like to hear what you think about it. Would you consider investing in a marijuana company? You can send your thoughts to winninginvestor@banyanhill.com.

Netflix and Amazon Have Plenty of Growth Ahead