2018 has been full of speculation on the next big market crash.

We’re now in our second correction of the year, which can cause a lot of doubt and selling among investors.

While everyone has their own theory of why things are so bad, a few common themes have stuck out.

First, it was inflation. Then, our economy was going to be ruined by a trade war.

Most recently, however, has been the realization by investors that interest rates are going up.

The Threat of Rising Interest Rates

Despite the fact that we’re only at about 2.25%, the market is pricing in a level of rates that would actually slow down growth.

This is partly due to the fact that the Federal Reserve has been extremely open to raising rates higher from here. However, with the current rates at 2.25%, it would likely take quite a bit more to have any meaningful impact.

One of the most vital parts of any economy’s growth is the level of profit its companies are bringing in. And interest payments directly take away from profits.

So, the fear surrounding interest rates is a rational one to have. After all, if companies aren’t making more money, what’s the point of investing in them?

Since 2005, there have been eight years in which interest rates have gone up. However, they really haven’t had a bad effect on profit growth over the long run. 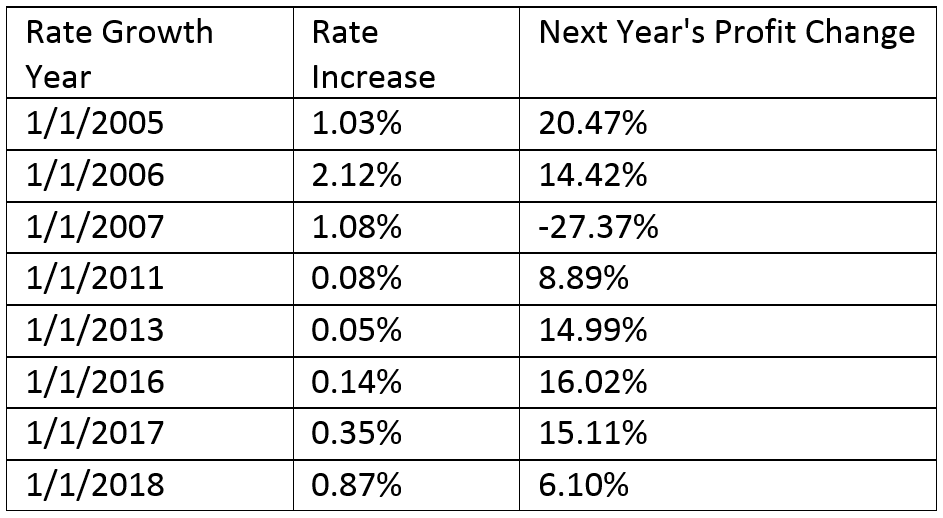 Of course, there’s the threat of rising inflation as well. If companies are being charged more interest, the idea is they’ll have to increase prices.

So right now at 2.25% interest and huge growth in corporate profits, the market has more than priced in a much worse scenario than we’re currently in.

With the sort of revenue and profit growth we’re seeing, and the relatively low level of interest rates and inflation, this market dip is one to buy.

Interest Rate Trend Shifts for the Second Time in 100 Years

What Market Crash? The Economic Boom Rages On