Home » Investment Opportunities » In the Future, Your Clothes Could Detect Heart Disease

By now, mostly everyone has either owned a Fitbit or a smartwatch, known someone who has, or at least is aware of their existence. Gadgets such as these are known as wearable technology, or “wearables,” and the product variety has extended much further than Fitbits. In fact, there are hundreds of wearable technology products out there that almost nobody has even heard of, and the things they can do can even save lives.

The chart below shows that demand for wearables is expected to double in the next four years, most of which is being driven by smartwatches. However, the biggest increase, proportionally, is in “smart clothing.” 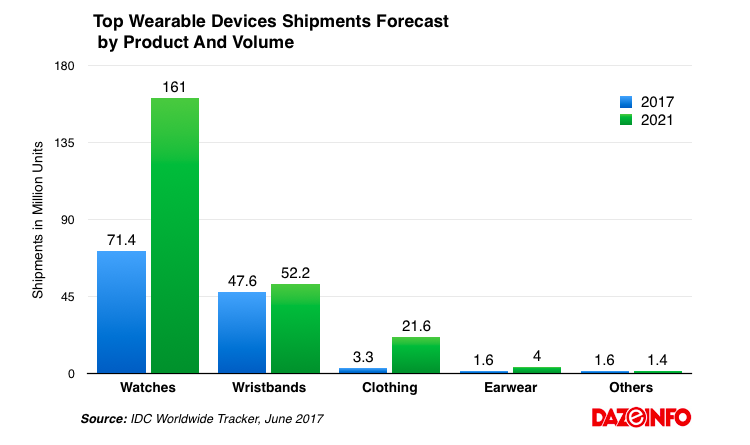 You may have never heard of smart clothing, but its sales are projected to increase by about 550% in four years. Although this isn’t something that has broken into the mainstream yet, it could be the future of casual clothes, as well as personal health and medical technology.

This fall, Google is expected to release its smart Commuter jacket in collaboration with Levi’s. The denim fabric of the jacket literally has technology woven into it that can detect touch interactions as well as gestures. The technology can connect to your phone, so you can control apps such as music, GPS and phone calls by simply sliding your hand across the sleeve.

On the health-related side, there are running shorts available that contain a sensor that monitors stride length, cadence, ground contact time and pelvic rotation. The technology in the fabric can link to your headphones and tell you if you should correct your running form to prevent injury. There is also a smart sleeve that you can buy online that monitors all kinds of fitness data, such as heart rate, sleep patterns and workout intensity.

The point of these two examples is not just how they can transform the world of fitness, but how they could also drastically improve the overall field of personal health. Specifically, the technology behind the smart sleeve is currently being tested to measure stress levels and detect heart-related issues such as coronary heart disease.

Lastly, there is a hat in the works for newborn babies that measures temperature, heart and respiratory rates, and blood oxygen saturation. Up to 24 of these hats can be linked directly via Bluetooth, giving doctors and nurses the ability to monitor an entire room full of newborns’ vital signs at once.

As Fitbits paved the way for mainstream wearable technology by simply tracking people’s steps and calories, we are now in the transition phase of fully realizing wearables’ potential. Over the next four to five years, we should expect to see more and more advertisements and displays for this groundbreaking technology.

This Biotech Company Is Showing 1 of My Favorite Buy Signals