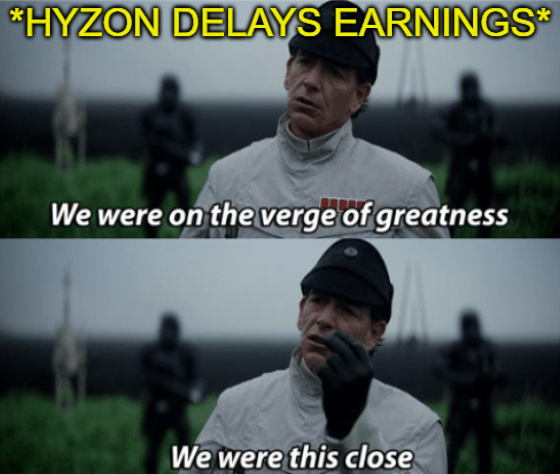 Friday Four Play: The “Can You Take Me Hyzon?” Edition

Hydrogen power takes one step back.

Thanks, Mr. Miyagi, but are we going to mention the Damn Yankees up there in the headline?

How about we don’t and say we did?

Now, on a normal Friday, I’d be asking: “Are ya ready, kids?” And then we’d all sing a halfhearted rendition of the SpongeBob SquarePants theme, dive into the inbox and see what emails stick, like Scrooge McDuck.

But this is no normal Friday. No, sir! And seeing as how many of your emails were about Hyzon (Nasdaq: HYZN) … we might as well get into the real meat of the matter.

By now, all y’all Great Stuff Picks investors holding HYZN should have noticed that the stock is down about 38% today. There’s no easy way to say it … oof. That smarts.

So what happened that caused HYZN shares to fall off a cliff? And is it serious enough that it warrants selling the stock? We’ll answer both questions in a sec, but to get the hydrogen-powered elephant out of the room … nope. We ain’t selling.

Hyzon announced two crucial pieces of info: First up, a joint venture in Europe fell through, forcing Hyzon to restructure its plans to expand throughout the region.

You might remember that Hyzon had teamed up with Holthausen to convert heavy-duty trucks over to fuel cells.

According to Hyzon’s filing, the company found “operational inefficiencies” in the joint venture, which means Hyzon needs to dump Holthausen and make a different plan to get its fuel-cell business properly growing across Europe.

But Hyzon’s other piece of news comes out of China — and this is likely what spooked HYZN investors the most.

Basically, revenue accounting wasn’t properly handled in China. This means Hyzon must delay its financial results while accountants/auditors go through and see exactly what info is inaccurate.

Since we all know that each and every U.S.-listed company is mandated to give an earnings report … everybody’s minds instantly went to delisting. Ask any Alibaba investor — delisting fears are a surefire way to send a stock tumbling overnight.

Now, this delay won’t cause Hyzon stock to delist due to non-compliance … but there is a threat. And that threat is how long it takes to find out what went wrong in China.

The biggest impact for us is that the company was on the verge of being profitable — thiiiiis close — and that’s probably out the door now.

So … why aren’t we selling this thing?

For a few good reasons: Unlike many strapped-for-cash energy companies, Hyzon still has more than enough cash on hand to finance operations for the time being.

I’m not too worried about the European joint venture. Remember, hydrogen power is taking off in Europe much much more than it is stateside. Someone will pick up where Holthausen failed.

While I am keeping an eye on the potential fallout in China, the concerns are only for fiscal year 2021. The errors were recognized internally … not externally by some short-selling hedge fund intent on destroying HYZN stock for its gain.

This is the first potential blow to the company’s management, but they seem to be on top of it, which is more than you can say for many EV startup companies that have come under fire…

That’s a good sign to me … despite the immediate results not going well for investors.

Remember, you are free to sell any stock in the Great Stuff Picks portfolio at any time. If you’re losing sleep, do what you need to do. It’s your money (or “investment capital” if you want to be all Richie Rich fancy), and I won’t tell you what to do with it.

But all that said? Great Stuff will continue hodling Hyzon in the portfolio.

Comments? Questions? Concerns? Need validation from some random dude on the internet? We’ve got an inbox for all of the above. Write to us at GreatStuffToday@BanyanHill.com whenever the market muse compels you.

Of course, if you’re not ready to leave the EV market behind completely, we’ve got you covered.

One startup’s new technology is poised to disrupt the $2 trillion car industry. Its light, inexpensive, powerful and quick-charging battery could be the tipping point that finally makes EVs affordable for everyday Americans.

In fact, a Wall Street legend predicts it will cause a 1,500% surge in EV sales over the next four years. 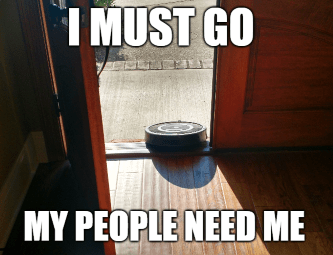 Roomba ‘round the world…

So Amazon’s (Nasdaq: AMZN) buying up a full-fledged consumer robot company. What could possibly go wrong? C’mon, we all know Amazon would replace more human warehouse workers with robots if it could. They’d need to be a lot more accurate than a Roomba though…

Now what was that we were just saying about an increase in buyout action now that tech stocks have been beaten to a pulp? Yeah, here we go. Before the acquisition, IRBT stock was 65% off of its 2021 highs, which must’ve been a great big “bargain buy” sign for Amazon.

This isn’t the ‘Zon’s first venture into the consumer robotics market. We mentioned (read: poked fun at) Amazon’s Astro, which was a cute lil’ Alexa-enabled home robot that brought with it a host of privacy concerns.

I know, I know, silly me, thinking any sense of privacy still exists … but you could at least not stick another robot eavesdropper in your house, for a start! I digress…

It’s only a matter of time (or Prime Days) before we see what Amazon does with its inherited robotic tech from iRobot, and I, for one, do not welcome our new Amazon overlords. 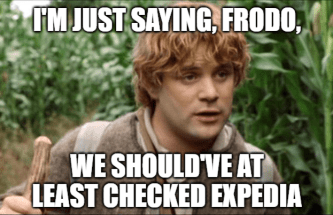 If you didn’t hear a rousing chorus of “dot cooooooom!” in your head just then, I’m not gonna be mad … just disappointed.

Thanks, dad, can we get on with the show now?

Ahem, yes. As you might wager, Expedia (Nasdaq: EXPE) earnings just echoed what Airbnb (Nasdaq: ABNB) reported earlier this week: This is the travel season of all travel seasons.

It’s no surprise, either: After two years of isolation and being cooped up with the fam, it’s time for everyone to stretch their legs a bit. For Expedia, that means more users on its travel sites, including the OG Expedia, Hotels.com, Vrbo (which is like Airbnb but 20% cooler), Travelocity, Hotwire and Orbitz.

In fact, Expedia said that revenue is up 51% from a year ago, coming in at $3.2 billion and handily beating estimates for $2.99 billion. That puts last quarter a whole 1% ahead of 2019’s second quarter.

Expedia might not be recovering/growing its sales as quick as Airbnb … but the company posted glowing results and further proved that travel is now finally above pre-pandemic levels. For this valiant effort, Expedia was rewarded with … erm … a meager 4% rally that was erased today.

Hey, it’s the thought that counts, right? No? Alrighty then.

Ever since Block (NYSE: SQ) pulled a Prince and became “the company formerly known as Square” … Block’s been trying to do anything and everything to impress investors and bust out of that L 7 square.

Mixing Prince and Rick James? Gutsy, but I’m about it.

Problem is, between the company’s foray into crypto trading, its Bitcoin hodling à la MicroStrategy and its money-transferring Cash App … all the ugliness came out in Block’s report. And there’s no renaming your way outta this one.

Per-share earnings came in at $0.18 and barely beat estimates for $0.16. Revenue, on the other hand, is a more complicated story. The Cash App that Block always hyped up? Yeah … revenue there fell 34%.

Block reported a $36 million impairment charge on its bitcoin holdings. Though remember: This only represents the lowest point of Block’s holdings during the quarter — not what it ended the quarter with.

It’s not a loss ‘til you sell, haha… Please, somebody revive SQ stock.

Sorry, but after a report like that, SQ dropped another 5%, though the shares managed to rally back to breakeven by the end of the day.

What I want to know is why anyone — Block, MicroStrategy, even your pal Jim down the street — would buy and hold bitcoin in this day and age. I mean … we just talked to Mike Carr about a better way to play crypto’s crazes and crashes. 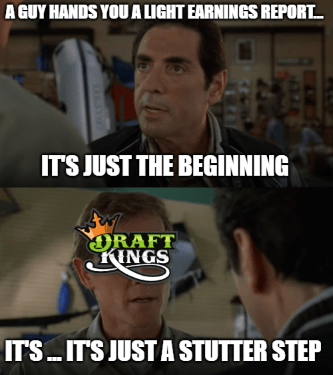 Wait, can you actually buy Donkey Kong stock? You’re only telling me this now?!

No, I wish, but we’re talking about the other DK today — DraftKings (Nasdaq: DKNG), the sports betting platform just reported bang-up earnings.

Granted, “bang-up earnings” might be an overly optimistic way to say that the company is still losing money … but it’s not losing as much money as analysts expected. So DraftKings has that going for it, I guess?

Earnings came in at a loss of $0.50 per share, topping estimates for a $0.75 loss per share. Revenue, on the other hand, reached $466 million and beat expectations for $439 million with room to spare.

But let’s be real here: This is a sports betting company, and we’re either in or about to be in a recession, drying up discretionary income for many consumers. Will people keep on gambling as they pay higher and higher prices for, you know, literally everything?

Well yeah, have you met a gambling addict before? Also, how do you think they’re raising cash for gas?

Touché, voice inside my head. Touché.

CEO Jason Robins has some insight on how the business is weathering the economic storm: “Customer engagement remains strong, and we continue to see no perceivable impact from broader macroeconomic pressures.”

Great sound bite, but just how strong is “strong?” Here’s a clue: In its report, DraftKings also noted monthly unique paid users were up 30% year over year, reaching 1.5 million. Better still, the company is making 30% more off of each user compared to last year.

DKNG traders sent the stock soaring 16% today, and that’s on top of its 20% pre-earnings rally over the past week.

Are any of y’all holding DraftKings stock? Is anybody folding? Let me know your own best bets in the inbox: GreatStuffToday@BanyanHill.com is where you can reach us best. 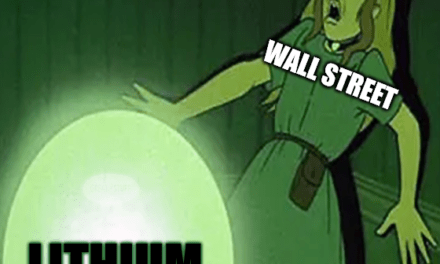