Home » Great Stuff » Bloodbath & Beyond; Or, Anarchy In The BBBY 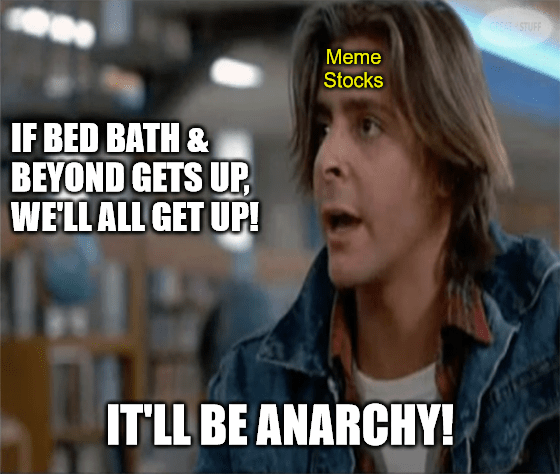 Don’t You … Forget About Meme Stocks

Great Ones, just when you thought it was safe to get back in the trading waters … meme stocks are back with a vengeance.

GameStop (NYSE: GME) is up more than 27% in August, while AMC Entertainment (NYSE: AMC) has surged more than 70%. OK, so GME never stopped being a meme stock, and even AMC’s management is leaning into the so-called “ape investors.”

But Bed Bath & Beyond (Nasdaq: BBBY) has become something else entirely.

BBBY stock is up a whopping 130% since the beginning of August, and it’s all because of the infamous Reddit message board r/WallStreetBets, or WSB for short.

Well, it’s not all because of WSB, but exceedingly large options bets on BBBY stock and a veritable $#%& ton of short interest certainly didn’t help matters.

It all started with activist investor Ryan Cohen.

You may remember Cohen from such hits as “selling Chewy to PetSmart for $3.35 billion” or “taking over GameStop to turn it into the next Amazon.”

Well, back in March, Cohen bought a 10% stake in Bed Bath & Beyond. This move put BBBY stock on the radar of many WSB speculators. After all, Cohen helped juice fellow meme stock GME … and the WSB “apes” figured: “Why not?”

Cohen stepped in with the hopes of fixing what CEO Mark Tritton had royally screwed up. Back in 2019, Tritton launched several in-house BBBY brands. These in-house brands were basically cheaply made products relabeled as Bed Bath & Beyond brands.

It wasn’t Tritton’s first foray into cheaply produced “owned brands.” He basically did the same thing when he was chief merchandising officer and executive vice president at Target (NYSE: TGT).

Unfortunately, Tritton’s “owned brands” move at BBBY didn’t work for multiple reasons — the biggest of which being COVID-19 lockdowns and the resulting supply chain issues. Sales plummeted due to consumer confusion and product shortages, forcing Bed Bath & Beyond to discontinue some in-house brands back in June.

The situation has gotten so bad for Bed Bath & Beyond that its operating capital shrank from $1.1 billion in May 2021 to just $108 million this year. The company is now in talks with private creditors for loans to remain operational.

That’s quite the horror story, Mr. Great Stuff. Why would anyone invest in BBBY?

That’s an excellent question. And the answer lies with short interest.

With so much negativity surrounding BBBY, short interest climbed to more than 61.5 million shares … or about 47% of BBBY’s shares available for trading. If BBBY stock continues to fall, these short sellers stand to make millions.

However, if BBBY stock rallies, then these short sellers are forced to buy back their positions in order to limit losses. And if BBBY rallies sharply … short sellers have to act fast. When this happens, it’s called a “short squeeze.” 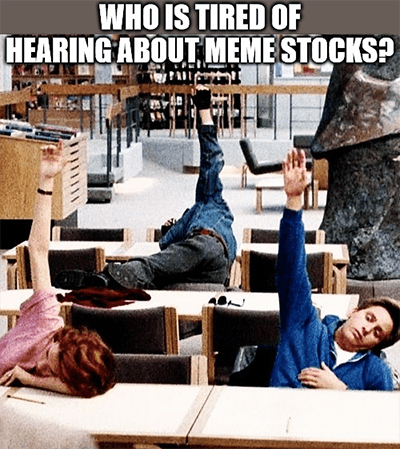 Short squeezes are the “get rich quick” trades that most meme-stock traders live for. I mean, why wait for the market to naturally produce a short-squeeze situation when you and your fellow “apes” can create one all on your own?

BBBY was the perfect target for just such a forced squeeze: heavy short interest, Ryan Cohen’s involvement and a questionable-but-hopeful turnaround plan.

And now, even more apes are piling on BBBY stock. Swaggystocks.com, a site that tracks meme stock sentiment on social media, reports that BBBY is the most talked about stock on Reddit right now with nearly 3,000 mentions.

There’s even one WSB ape that says he took out a $27,000 personal loan to go “all in” on BBBY call options!

I’m not linking that one, just so you know. Even I have my language limits…

Great Ones, I know it’s tempting to rush out and try to jump on this meme stock trend. I mean, you might get lucky. You also might go bankrupt really, really quickly.

Personally, I think Bed Bath is headed to the great Beyond … and what we’re seeing now is the death throes of a struggling company throwing everything at the wall to see what sticks.

Now, if you really want to speculate on a continued BBBY stock short squeeze … I can’t stop you. But I can offer a much more reliable and safer option, with potential gains that are just as big…

Bigger than meme stock gains? You’ve got to be joking, Great Stuff.

Oh, I’m not joking — and neither is Andrew Keene.

The guy has simply been killing it this year. In a year where the S&P 500 has dropped 18% and the Nasdaq has dropped 28% … his portfolio has produced 72% winning trades.

(And no, we’re not calling Reddit apes “smart money” … perish the thought.)

Andrew shares these signals with members of the exclusive Trade Room. And by following them, members have seen one-hour gains as high as 100%, 230% and 250%. 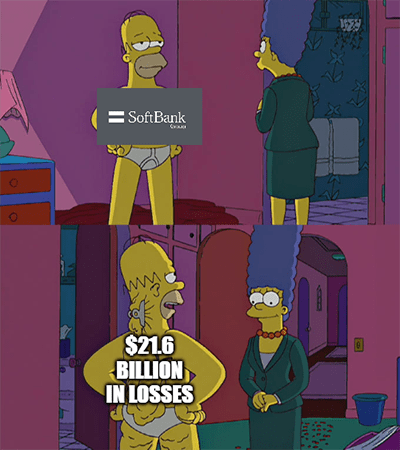 If you ever feel bad about how your portfolio fared throughout the market rout … just have a look at SoftBank’s last quarter for some sweet, sweet schadenfreude. It is the best “freude” after all.

Known for funding such glowing successes like WeWork, SoftBank’s (OTC: SFTBY) main hustle comes from the IPOs of its private companies. Seeing as how basically nobody wants to go IPO now, you can guess how well this quarter went for SoftBank.

The oh-so-visionary fund reported a record $21.6 billion quarterly loss for its Vision Fund investment unit. Ooof. SoftBank has resorted to selling off parts of its investments to keep the whole shebang afloat — most notably Uber (NYSE: UBER), where SoftBank dumped its entire stake.

I mean, what do you even say in your earnings report after that? Maybe just: “My bad, lol.” Or how about: “Looks like I’m not the only one Uber screwed over this year.”

No. I don’t think I will. Commenting on the disaster of a quarterly loss, SoftBank founder and Vision Fund runner Masayoshi Son noted: “The market and the world is in confusion.” 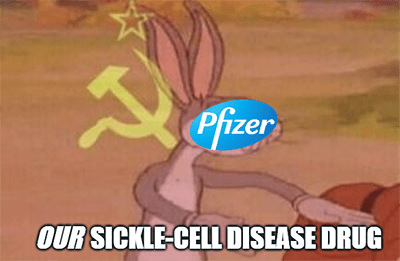 And who does a biotech buyout like Big Pharma?

Global Blood Therapeutics is notable for having one of the few approved treatments for sickle cell disease. Pfizer pulled out all the PR stops with a feel-good, corporate buzzwordy announcement:

[The buyout] complements and further enhances Pfizer’s more than 30-year heritage in rare hematology and reinforces the company’s commitment to SCD by bringing expertise and a leading portfolio and pipeline with the potential to address the full spectrum of critical needs in this underserved community.

That’s a whole lot of breath to just say: More drugs, more money. (We’ll save the “more problems” part for another day.) Pfizer, just like all of Big Pharma’s major league drugmakers, is always on the hunt for new drugs or treatments to add to its ever-growing stable of … well … stuff to sell you.

When you have the kind of cash that Pfizer does, sometimes it’s easier to just watch other, smaller biotechs make medicines and buy those companies outright rather than deal with all that “drug development” hassle.

Nothing To See Here… 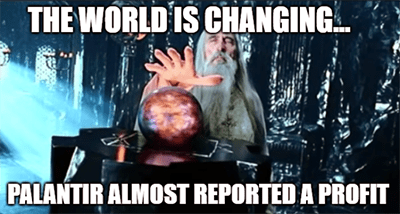 Palantir (NYSE: PLTR), the company named after the seeing stones from Lord of the Rings, somehow didn’t see the devastation that’d follow its earnings report today.

On the surface, there’s nothing entirely wrong with this report, per se — it’s more so that every report from Palantir looks like this.

Long criticized for its reliance on government clients, data software company Palantir actually branched out and brought its number of commercial customers up 250% over the past year. Commercial revenue, in particular, shot up 46%.

For all that greatness, though, Palantir still — still — can’t turn a profit, posting a loss of a penny per share versus estimates for a $0.03 profit per share. Worse still, Wall Street thought Palantir’s guidance was weaksauce, leading CFO David Glazer to blame government work for “lumpiness” in revenue.

Same as it ever was…

Are any of your personal picks headed into the earnings arena this week? Got any earnings trades in your sights? Want to shoot the stuff and shout out whatever’s on your mind?

All that greatness belongs right here in the inbox: GreatStuffToday@BanyanHill.com. Write to us! 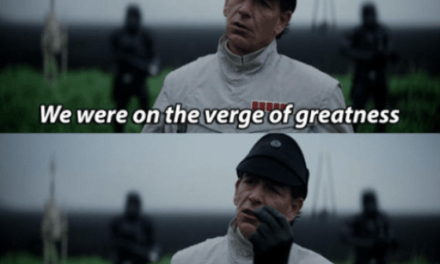 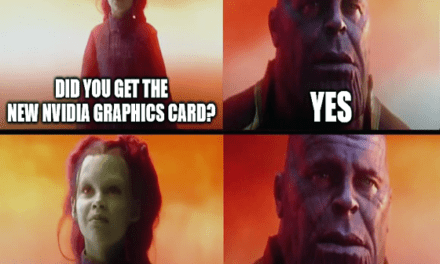