As I discussed in a previous article, OPEC met on May 25 to negotiate extending its production cuts. Right now, the giant oil cartel is in a bind. Nobody needs higher oil prices more than OPEC. The group is at odds … again … on how to do that.

There’s Just Too Much Oil

The volume of oil and fuel stored around the world is going up. There was a record volume of oil stored in 2016: over 4 billion barrels stored in ships, tank batteries and barrels. Per the Energy Information Administration (EIA), that volume will continue to build by about 200,000 barrels per day this year. 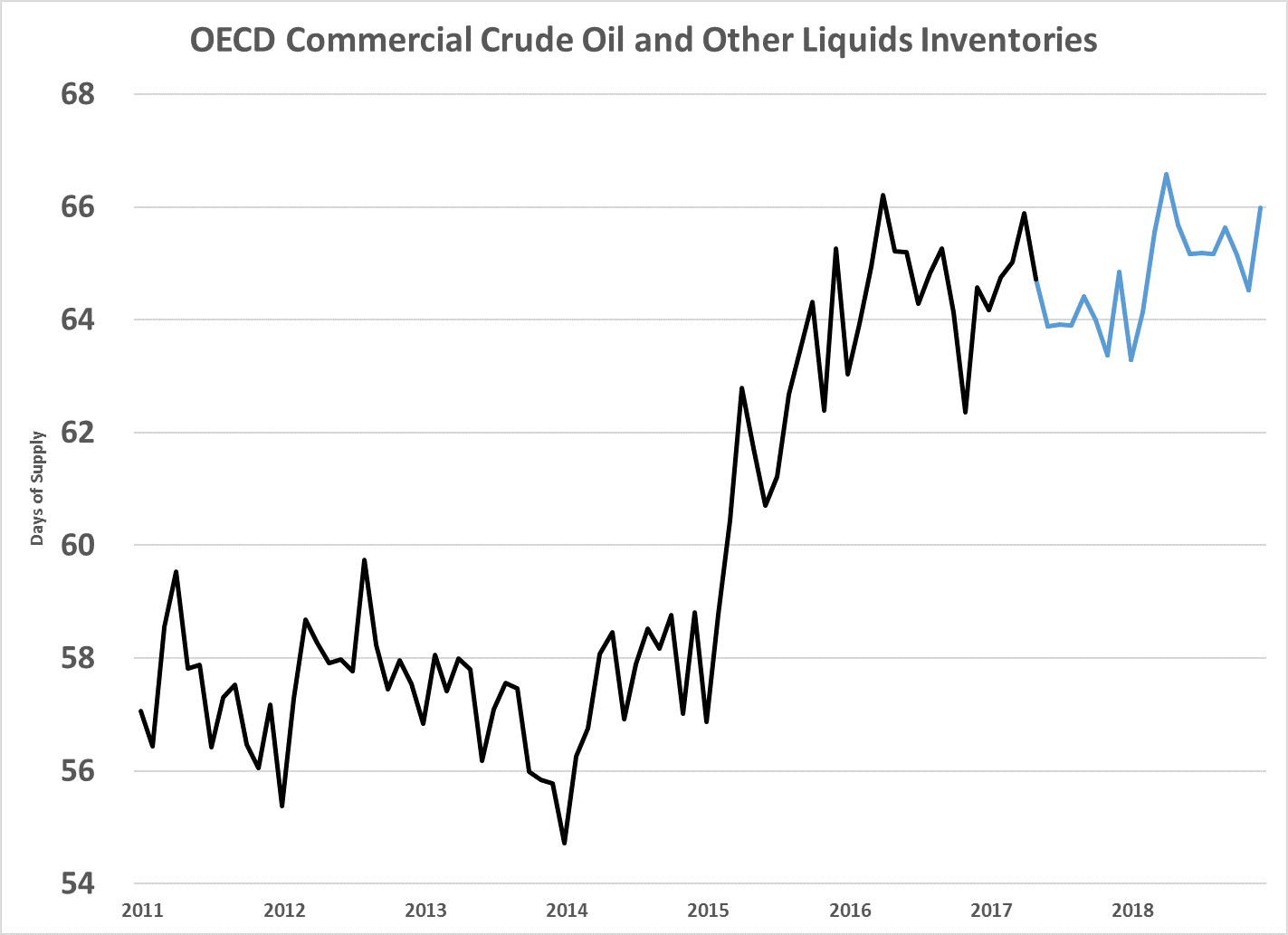 This chart shows the oil supplies in the 35 countries that make up the Organization for Economic Cooperation and Development (OECD). It’s important to note that China is not part of the OECD. However, supplies are rising there too.

Watching the supply of oil in storage is critical for understanding the way oil prices respond to changes in production. As oil prices began to fall in 2014, oil speculators began to buy it and store it, waiting for prices to recover.

Prices haven’t recovered enough yet to work through that oversupply. Remember, the countries in the OECD make up 48% of the world’s oil and liquids consumption. The data says that the OECD added 10 days’ worth of supply since the low in 2014 — that’s roughly half a billion barrels of oil and liquids.

A little over 463 million barrels went into storage as the price fell … and they’re still there, acting as a giant roadblock to higher oil prices.

It’s important to note that the supply continued to rise after OPEC cut production last year. That’s why oil prices didn’t soar … and why they probably won’t jump much soon.

That’s because the market already knew about and priced in the cuts. And the cuts have not, and will not, cut enough of the surplus oil out there. There’s just too much oil for the price to rise much without deeper cuts. OPEC just renewed the existing cuts without going deeper, so the market shrugged them off.

In my monthly newsletter, Real Wealth Strategist, I have one oil company in the portfolio. It’s a high-quality Permian Basin explorer that won’t be troubled too much by volatility in oil prices.

That’s the only oil position right now because oil prices looks capped to me. With that much oil in storage around the world, OPEC’s cuts won’t push oil prices up much above where we are today. That doesn’t mean we can’t make money here; it just means we have to be selective about our oil investments right now.

The Blueprints for a Power Shift in Oil