This Graph Warned Us of the Tech Sector Sell-Off

A few weeks ago, the tech sector experienced its biggest slide since December.

It left many investors puzzled because the only news leading the sell-off was a downgrade on Apple. Downgrades and upgrades happen all the time and rarely move a single stock by any significant amount, let alone an entire sector.

So that wasn’t the culprit.

Instead, it was a quantitative-based approach to trading that caused the sell-off.

Marko Kolanovic, the head of quantitative and derivatives research at JPMorgan, sent out a note to rationalize the sharp move by saying that about 10% of trading volume in stocks is fundamental-based. Roughly 60% of trading is from passive investing or quantitative trading, he added, which is based on computer formulas and trading by machines largely.

And I have to say, I agree with him on any given day. Overall, I would say that a fundamental viewpoint is critical for almost every shareholder, but when it comes to traders and most of the daily trading volume, computer-based models have an overwhelming share.

Here’s your key takeaway from this type of market move: If you are only viewing one aspect of investing, either fundamental or quantitative, then you are going to be missing out, and you’ll misunderstand moves like this.

The quantitative approach that triggered the sell-off was relative rotation.

This is a concept I have discussed before, and one that has been accurate as well.

I use the Relative Rotation Graph™ (RRG) to help us understand it, because I know the concept of rotation goes against a notorious approach to investing — to let your winners run and cut your losers.

While that is still true and a good methodology, it is also true that letting your winners run isn’t the most efficient place for your capital, and that’s because of the relative rotation in the stock market.

In the long term, sure, let your winners run and build upon their gains for you. That may be the easiest way to invest.

But over any period of time, your winners are only the best outperformers over a certain, smaller period. We don’t know what that period will be, but by using the RRG, and thus a quantitative approach, we can see it coming and generate better results.

A Bad Week for Tech Stocks

For example, here’s a snapshot of every leading sector the week before the tech sector plunged.  I threw in some of the top tech stocks as well (Facebook, Amazon and Apple, Netflix, and Google [FANG]): 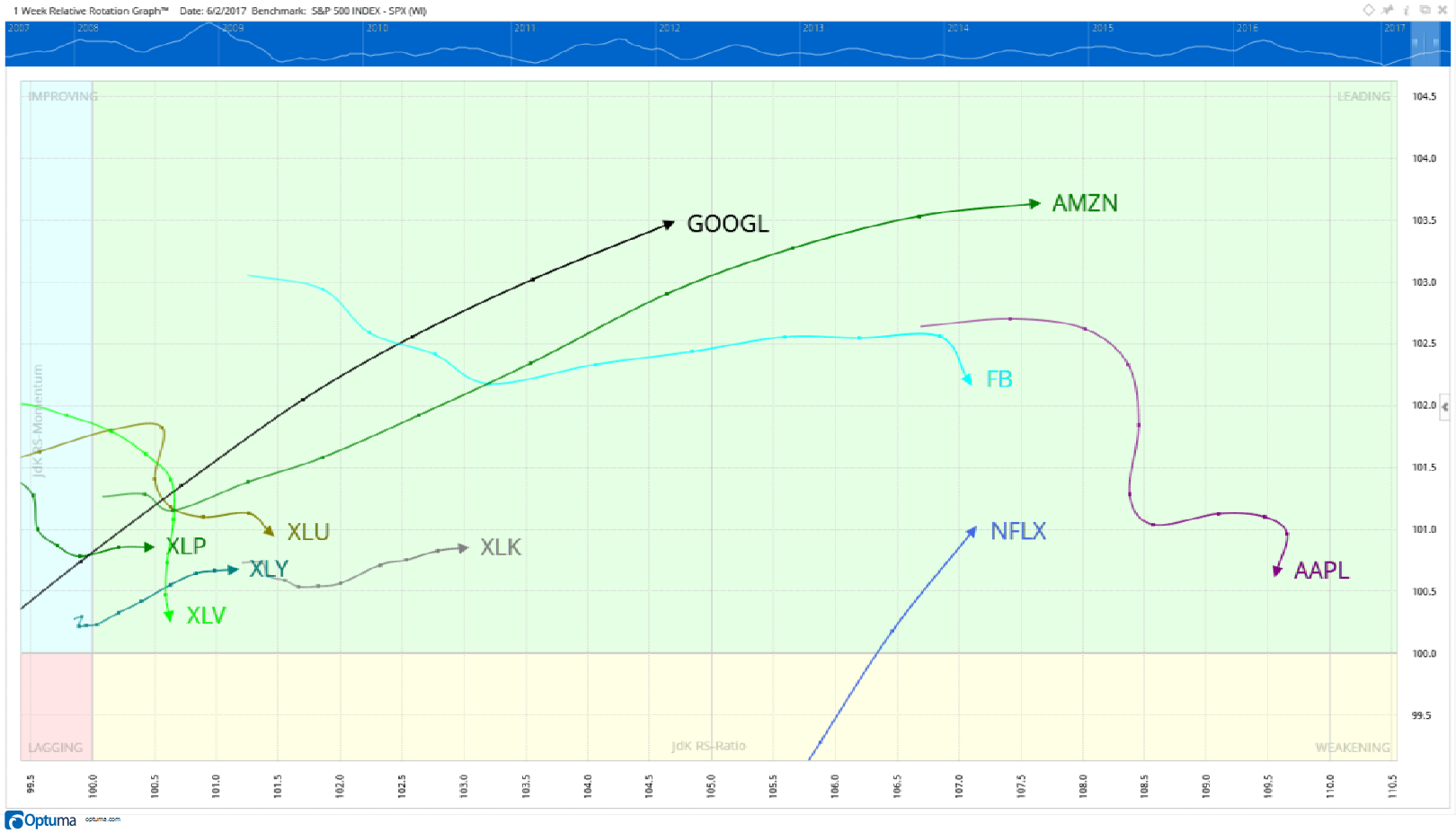 You can see that those tech stocks were well ahead of the sector and all in the leading quadrant, which is the top right of the RRG. I’ll also add that the farther away from the center of the boxes, the more volatile a stock is, and bigger moves can be expected.

Apple (AAPL) and Facebook (FB) are already turning lower, while Google (GOOGL) and Amazon (AMZN) have a flattening slope, which signals weakness.

XLK, which is the SPDR Technology Select Sector ETF, is also the farthest ahead of the sectors, hinting that it is due to weaken.

Now, we wouldn’t have known through this that the rotation would have been so abrupt, but we knew it was coming.

And here’s what it looked like after the next week: 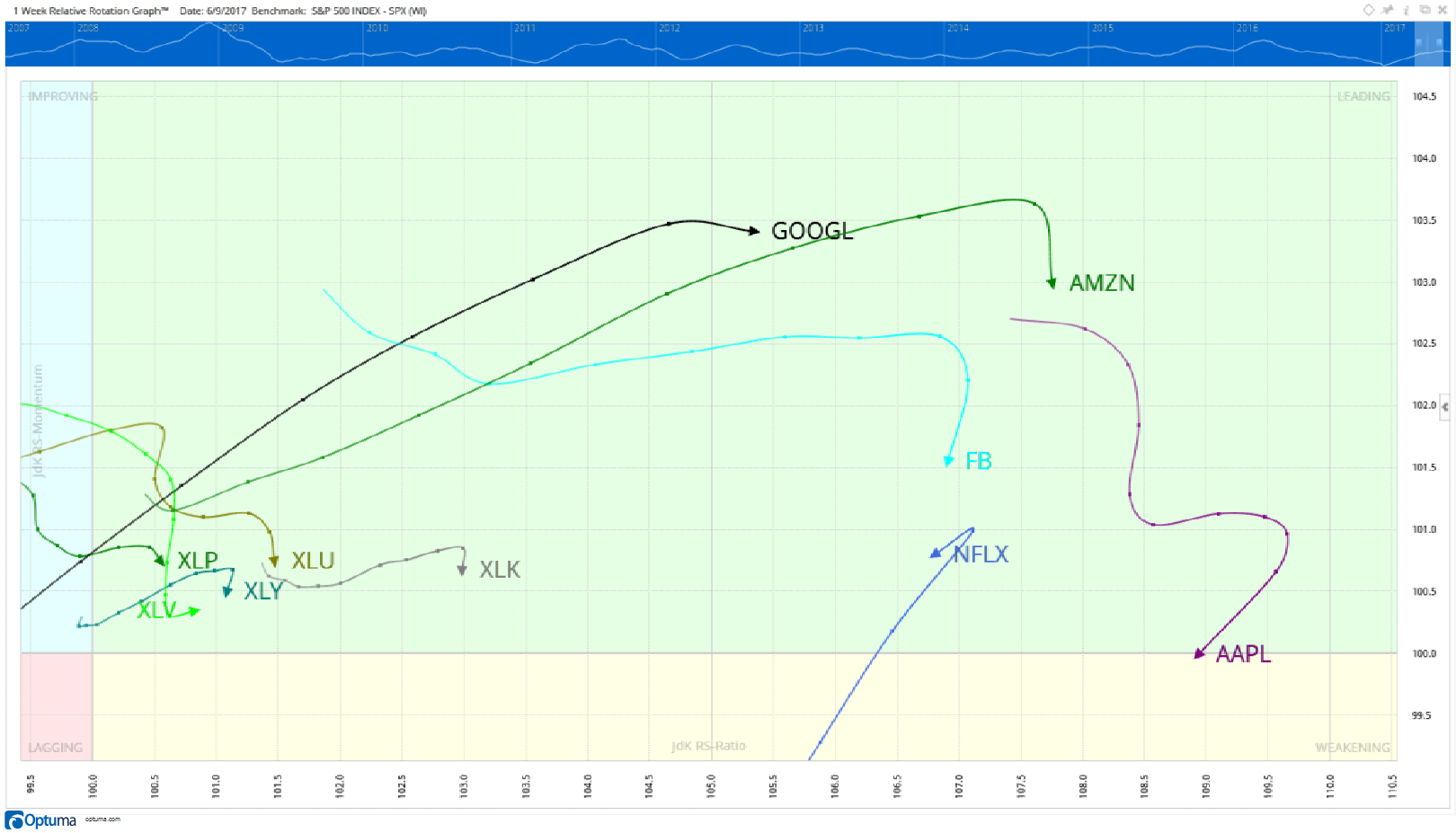 So the sell-off seemed shocking based on fundamentals, while based on relative rotation, it was actually expected.

Since then, the tech sector and tech stocks have remained weak based on the RRG, telling me now is not the time to own tech stocks. Instead, you’re better off shorting tech stocks even after the sell-off — there’s more selling to come.

There’s No Need to Fear a FANG-Less Index