Gold traders are doing something they haven’t done since 2002.

According to the latest Commitment of Traders report on gold positions, large speculators now hold a net short position on the precious metal.

This means they’re more bearish, or making more bets that gold prices will fall, than at any point over the last 16 years. 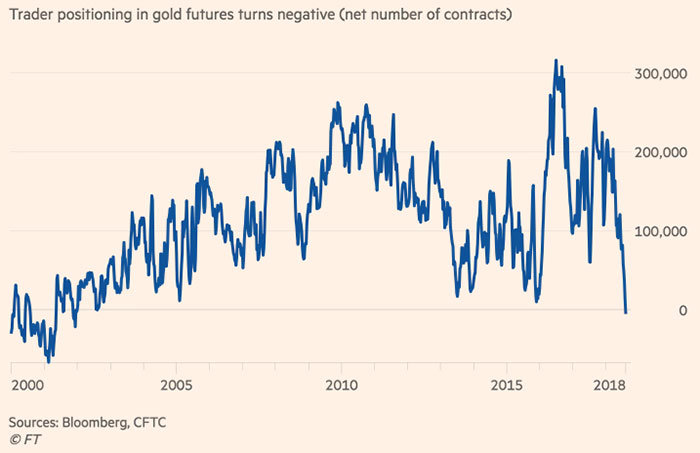 But this extreme level in sentiment for gold speculators comes at a time when gold prices are not at extremely high prices.

Back in 2002, the last time large speculators held a net short position, gold was trading at just $300 an ounce.

Gold prices surged 20% over the following year, and went on an epic bull market run to nearly $2,000 an ounce.

Gold prices have fallen almost 40% from that peak and are down 8% this year. But this is not a good time to double down on your short positions.

From here, a 20% rally in the next year is a conservative estimate.

Gold is set to enter its next major bull market, just like it did back in 2002 when speculators also held a net short position.

Don’t bet on a further decline from here.

After all, the cost of gold mining has shot up over the last two decades. Many gold miners and analysts have pegged the average cost to mine gold at around $1,100 an ounce.

As prices fall so low that miners can barely make a profit, production slows and supply for the precious metal dries up.

This, in turn, puts a bottom in prices as demand exceeds supply, leaving prices left to rise.

So look for gold to be one of the best-performing assets in 2019.

Is Now A Good Time to Invest in Silver?