Why You Should Invest in Domino’s Pizza Stock (NYSE: DPZ)

“I love it when a plan comes together!” — Hannibal Smith, “The A-Team”

Have you been following my colleague Ted Bauman?

If not, you need to start now.

At the beginning of the year, Ted highlighted a few market sectors that he believed would do well in this increasingly uncertain U.S. economic environment. Among his top picks were consumer discretionary stocks.

As he noted in the January issue of The Bauman Letter, this sector would see a bump this year due to the Trump tax plan and a push toward higher wages. Judging from economic data so far, Ted’s plan is coming together nicely.

While the bump in wages hasn’t been as significant as the Trump administration promised, it has benefited many select retail names in the discretionary sector. In fact, July U.S. retail sales rose a larger-than-expected 0.5%, blowing past economists’ forecasts for a meager rise of 0.1%.

What’s more, restaurants were gangbusters on the month, posting a 1.3% rise in sales to $61.6 billion. That brings the restaurant industry’s annualized three-month gain to 25.3%, the fastest pace since 1992.

As you might have guessed, today’s free trade idea looks to boost your returns by taking advantage of the market-leading restaurant sector. And this company might even fix the streets in your neighborhood while it delivers huge gains for your portfolio.

Avoid the Noise: DPZ Stock Is a Buy

In a throwback to my college days, today’s pick is Domino’s Pizza Inc. (NYSE: DPZ).

The company has shown considerable moxie this year, taking advantage of the downfall of rival Papa John’s and launching its own viral marketing campaign. Who knew that offering to fix potholes on your street would resonate with the pizza delivery market?

But the marketing move has paid off big. Domino’s has bested Wall Street’s earnings expectations in every quarter for the past year. Furthermore, revenue growth has averaged about 22% in the past four quarters and is projected to come in at nearly 24% for fiscal 2018.

That’s more than double the restaurant industry’s average revenue growth of 11%, according to CSIMarket.

And that growth is not just coming from stateside pizza orders either. Domino’s has become Britain’s biggest pizza delivery firm.

As a World Cup sponsor this year, the company sold 8.2 million pizzas during the event. The move helped boost U.K. sales by 8.3% in the first half of the year.

With strong consumer growth expected in both the U.S. and the U.K. for the latter half of 2018, Domino’s looks hot and ready for your portfolio right now.

Domino’s fundamental strength has translated well for DPZ stock. So far this year, DPZ shares have skyrocketed more than 58%.

But there is a caveat to buying into DPZ stock right now. The shares have broken out to all-time highs, and this has left DPZ vulnerable to short-term profit-taking.

As you can see in the chart below, the stock’s 14-day Relative Strength Index (RSI) is quickly closing in on 70. RSI readings north of 70 are indications that a stock is overbought and could be vulnerable to a near-term decline. 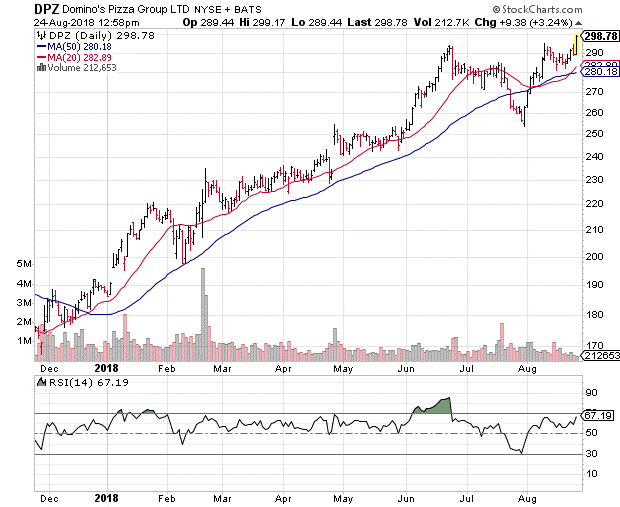 That said, price support should emerge in the $280 to $290 region for DPZ. That is your buy range for this stock should you choose to add it to your portfolio.

I expect the shares to consolidate recent gains into this area before embarking on the next leg of their uptrend, which should come once the shares break above $300.

The resulting rally should carry DPZ steadily higher into the end of the year.

Here’s Why the Bull Market Isn’t Over Yet