Is Now A Good Time to Invest in Silver?

You may not believe it, but it’s true.

The 2015 bottom was the lowest price since the Great Recession in 2009. That’s how cheap silver is right now.

But that’s not surprising. Precious metals are on the outs right now.

The U.S. dollar became a “safe haven” currency thanks to economic uncertainty in the world. Wealthy Turks, Argentines, Venezuelans and Europeans are buying dollars against fears of a slowing global economy.

That’s not ideal for them, but the dollar is the best of a bad currency market.

At the same time, cryptocurrencies took in $190 billion. That money went into gold and silver a decade ago.

That’s the money of folks who worry about government currency. They worry that a dollar, backed by the “full faith and credit of the U.S. government,” is just an IOU.

In the past, those people wanted something tangible. Something that could hold its value if the dollar went bust. Many of the people who bought into cryptocurrencies did it for the same reason they owned gold and silver back in 2010.

So, a strong dollar and an alternative haven pushed down the price of silver in dollar terms.

Silver Is A Strong Investment

Exchange-traded funds (ETFs) held 670 million ounces of silver at the beginning of the year. That’s a record.

Industry is the largest demand for silver. It consumed 60% of the silver last year.

However, in today’s market, fundamentals don’t matter too much. The fear of slowing growth around the world drove the price of silver lower.

That said, silver is a great speculation today. The reason is that silver is at an emotional extreme. The fear of slowing growth pushed silver well out of its normal valuation.

We need to buy silver. Here’s why…

Silver Is at an Extreme

Today it takes more than 84 ounces of silver to buy an ounce of gold. That’s huge. It’s the highest we’ve seen since October 2008.

The average, going back 25 years, is about 65 silver ounces per ounce of gold. That puts today’s spread at an extreme.

The silver-to-gold ratio only broke 80-to-1 five times since 1995. You can see them on the chart below: 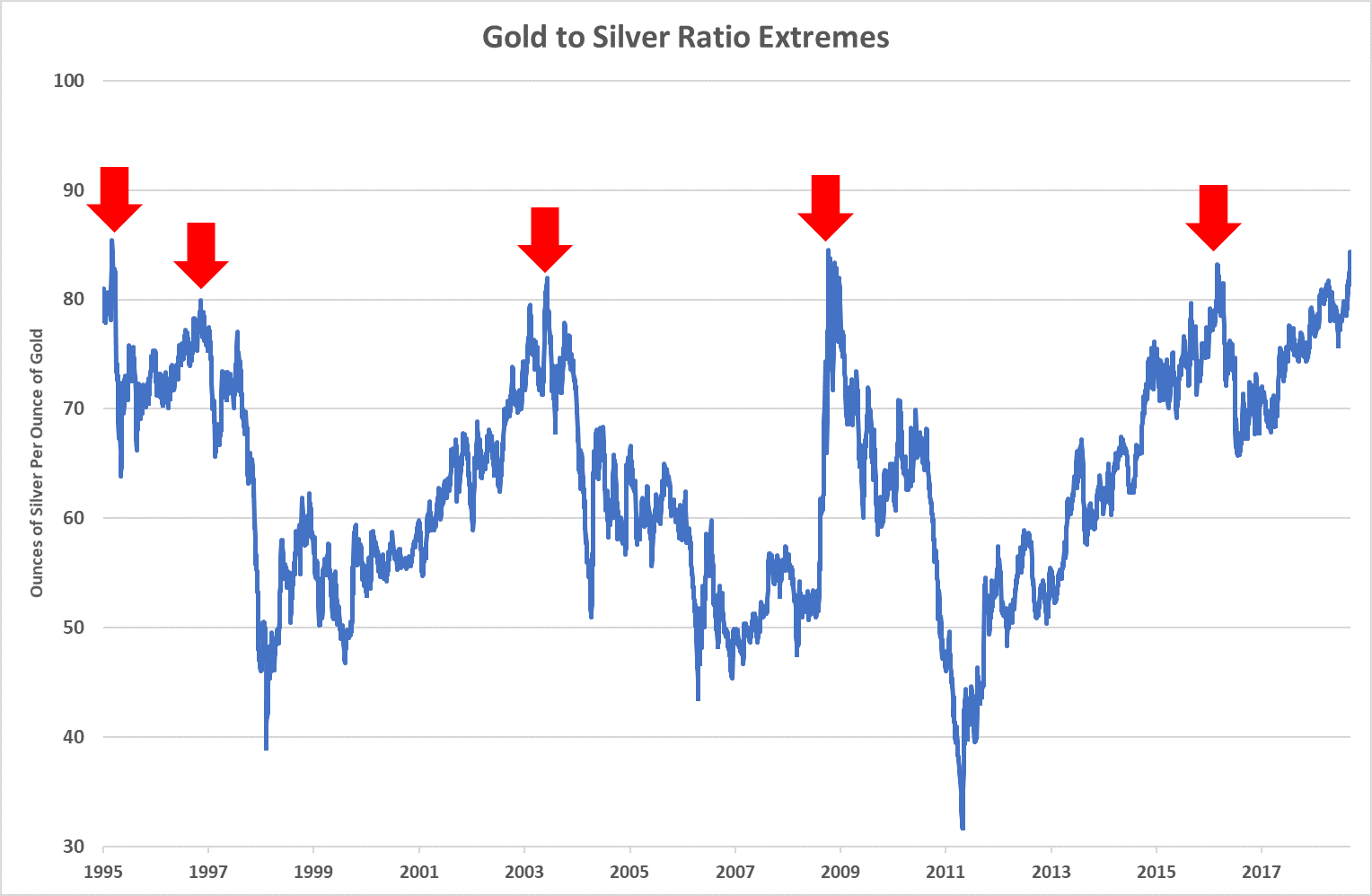 If you bought silver at each of those points, you made double-digit gains.

Silver averaged 110% gains after those extremes. More importantly, it never fell in price.

That means it’s time to take a position in silver.

Palladium Spikes 34% After the Death of Diesel