On October 8, Kobe Steel (OTC: KBSTY) admitted to quality-control fraud on its metal products. It faked strength and durability test data for years.

The company sold sketchy material to 500 companies. This is a serious and important scandal … not just for shareholders, but for you and me.

Cars, electronics, airplanes, bullet trains and even a rocket all have compromised safety because the metal in them is suspect.

The fraud wasn’t isolated. According to Bloomberg, four of Kobe’s plants faked aluminum test data. Details are still coming out, but one thing’s for certain: Shares of Kobe are going to fall much further.

As you can see in the chart below, shares are down just 32%. 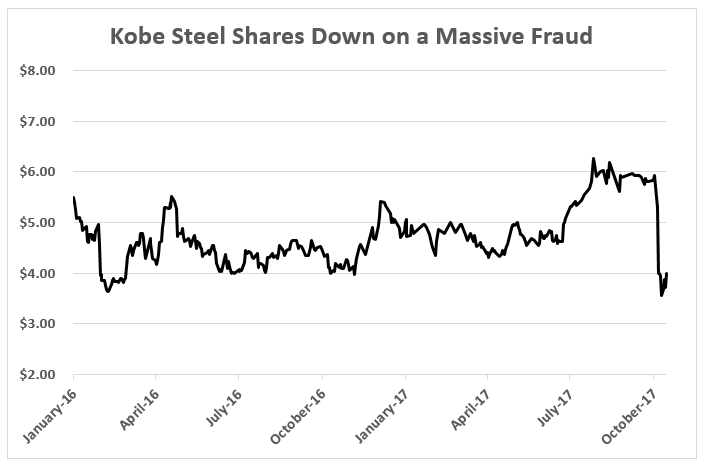 Make no mistake: This scandal will deepen. Shares of Kobe could and should fall further.

Fallout from fines and penalties could bankrupt the company. Buying after this short fall is like trying to snatch a quarter out from under a falling tree: The risk is not worth the reward.

P.S. I recorded a video with more of my thoughts on the Kobe Steel scandal:

Copper Is the One Metal You Can’t Ignore