Back on April 21, I told you we could “Pocket Double-Digit Gains This Summer” thanks to falling natural gas prices. To recap:

The oil industry is back to work. Oil production bottomed back in September 2016. As it picks up, so will natural gas production. The higher price will encourage new production too.

In summary, we have a near-record amount of natural gas still in storage. We have high natural gas production that should rise. And we have a capped demand for natural gas.

Looks like a recipe for falling prices to me.

A Recipe for Falling Prices

The natural gas trend is playing out as we expected. As U.S. oil production climbs again, natural gas production began climbing too, as you can see below: 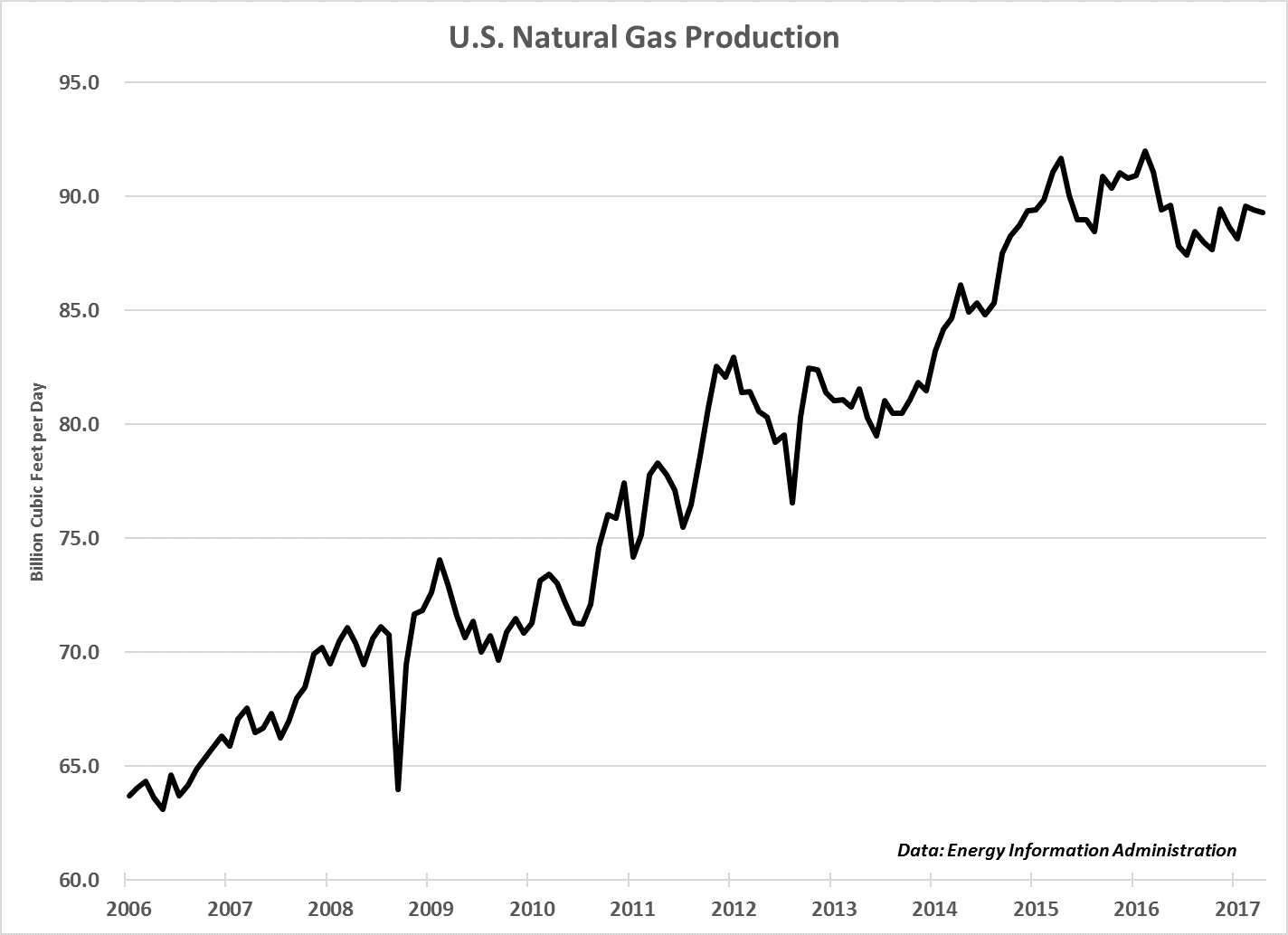 Unlike oil, it is difficult to export extra natural gas. The U.S. doesn’t have the pipeline or ship capacity to relieve oversupply. That means natural gas prices should continue to fall. The trend is in place, as the chart below shows:

As you can see, the natural gas price is heading lower. That’s a trend we expect to continue through the summer.

In summary, the natural gas sector has rising production in an already saturated market. That’s a recipe for falling prices. It looked like a great opportunity to make double-digit gains in a relatively short time.

As I discussed back in April, our opportunity was to short natural gas by owning consumers. Companies that rely on natural gas for fuel do well when natural gas prices fall. I recommended nitrogen fertilizer companies such as Terra Nitrogen Co. (NYSE: TNH) and CF Industries Holdings Inc. (NYSE: CF) that use natural gas to make fertilizer.

Turns out, my thesis works. CF Industries shares are up 15% since April 21. Terra Nitrogen shares aren’t doing as well yet. They are down slightly, about 4%. However, if you bought shares, you already received almost a dollar in dividends per share. I expect to see Terra shares catch up to CF Industries by the fall, if the natural gas trend remains in place.

I hope you made some money on this trade, but if not, there is still time.

Editor’s Note: Matt has found a little-known mining company that’s going to give early investors the chance to grow their money as much as thirtyfold. That’s because it’s sitting on a massive deposit of a “magic” metal that’s essential to the global economy. Click here to learn about the supply crunch this metal is facing, and why it has the potential to launch this commodity’s price to levels it’s never seen before.