I Was There When 5 Congressmen Were Shot

Have you personally ever witnessed a mass shooting in a crowded public place?

On March 1, 1954, at 2:30 p.m., the U.S. House of Representatives was in session, and I was there on the House Floor, working as a 15-year-old page boy. I saw five congressmen shot down, a horrific scene forever fixed in my memory.

This historic photo was taken just two minutes after four Puerto Rican nationalists fired 30 rounds into the House chamber from the Visitors’ Gallery, 10 feet away from where the shooters stood. 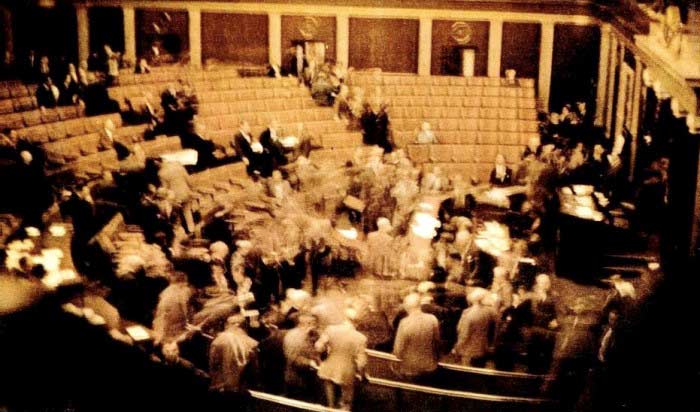 I may well be one of the blurred figures in the lower right of the photo.

The horror of my youthful memory was revived on February 14 by the shooting rampage at Marjory Stoneman Douglas High School in Parkland, Florida, only 20 miles from my home.

I don’t suggest that the wanton slaughter of 14 young people and three staff members is comparable to the shooting of five congressmen. I note only the personal impact each event had on me.

In 1954, as a teenage witness, I was scared and shaken momentarily. Now, 64 years later, as a former member of Congress myself, and as a father and grandfather, the terrible tragedy at Parkland depresses me profoundly. But it also encourages me to think how best we, as a people, can prevent these repetitious school gun massacres.

As a member of the Maryland State Senate representing five Chesapeake Bay counties where waterfowl hunting is a way of life, I had a perfect National Rifle Association (NRA) voting record.

Now, as then, I believe in Second Amendment rights, as defined by U.S. Supreme Court Justice Antonin Scalia in District of Columbia v. Heller, a case that affirmed both our right to own guns, but also underscored the government’s right to regulate firearms.

Like most rights, the Second Amendment right is not unlimited. It is not a right to keep and carry any weapon whatsoever in any manner whatsoever and for whatever purpose. […] The court’s opinion should not be taken to cast doubt on […] laws imposing conditions and qualifications on the commercial sale of arms.

I suspect many share my frustration about what must be done. Surely the militant actions of the Parkland high school students should inspire us all to join them in seeking solutions.

Rep. Brian Mast, R-Fla., a U.S. Army veteran who used an AR-15-style semi-automatic weapon in Afghanistan, said in a New York Times op-ed Friday that this gun is “an excellent platform for those who wish to kill the innocent.” He recommends that Congress define and again impose a national ban on the sale of assault weapons, as existed from 1994 to 2004, a position backed by 67% in a national poll following the shooting.

Mast also calls for background checks for all gun buyers, waiting periods, increasing the age of purchasers for various firearms and curbs on access for those with a mental illness.

I agree with Sen. Marco Rubio, R-Fla., that state legislators should consider enacting laws enabling family members or law enforcement officials to seek a court order to control anyone suspected of potential gun violence. Only five states now have such laws.

Newtown, Las Vegas, Orlando and now Parkland should never have yet another preventable tragedy added to this heartbreaking list.

After the 1954 Puerto Rican shooting that I witnessed, the security at the U.S. Capitol was greatly increased. Today, members of the Senate and the House enjoy some of the tightest and most elaborate protections against violence in America.

American students, and all Americans, deserve no less.

Editor’s Note: Did you know that every day, more than 41,000 Americans are hit with a lawsuit? Frankly, it’s not a matter of if you will be sued … it’s a matter of when. If you have any assets to your name, it’s critical you either spend thousands of dollars talking to your lawyer about how to protect yourself … or you simply claim your free copy of Lawyer-Proof Your Life right away. To order the controversial book that has lawyers around the country up in arms, click here now.

Join Me in the Switzerland of South America