Let’s get one thing out of the way — this article isn’t about politics.

It’s about making money from cybersecurity. The tsunami of spending in this sector just keeps getting bigger and bigger.

And so do the stock prices of many cybersecurity companies.

When I first started writing about this mega trend back in August last year, my favorite exchange-traded fund (ETF) to play this trend with — the ETFMG Prime Cyber Security ETF (NYSE: HACK) — was trading at $29. 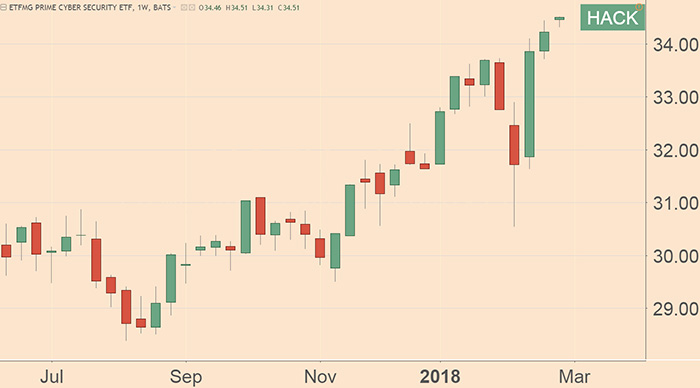 And it’s only going higher from here, in my opinion — thanks in part to an estimated $1 trillion in new cybersecurity spending between now and 2021.

This is where the “Russian hackers” opportunity comes into play.

Setting politics aside, the story’s pushing a huge pool of customers — federal, state and local governments — into upping their spending.

It’s already starting to happen at the federal level. It’s only a matter of time before local and state groups join in.

As CDW, a leading information technology (IT) company, notes in its FedTech blog: “The budget serves as a way for the White House to signal its priorities, and when it comes to IT, the message is clear: Cybersecurity is critical.”

I believe spending will become even larger from here.

For instance, the National Institute of Standards and Technology has created something called the Cybersecurity Framework — it establishes the technical standards to keep federal computer systems secure.

Basically, anyone doing business or transactions with the federal government — contractors, state governments and those receiving federal grants — will need to comply with new rules for keeping data safe.

What about at the state level? “Security and risk management is the No. 1 priority” according to a recent survey of members of the National Association of State Chief Information Officers.

Keeping Russian Hackers Out of Our Elections

On the other hand, actual increases in cybersecurity funding are few and far between.

According to the Ponemon Institute, most states are still far behind — increasing their cybersecurity-IT budgets at 2% a year (if they increase them at all), while most companies raised theirs by 10% or more in the last few years.

But that might be starting to change, at least around the edges of the problem, such as voting safeguards.

That’s a drop in the bucket from a funding perspective.

A group of Congressional Democrats wants $1 billion in election-oriented cybersecurity spending (a proposal that will go nowhere).

Thanksgiving and Its True Meaning