Find Your Trading Philosophy and “Predict” the Future 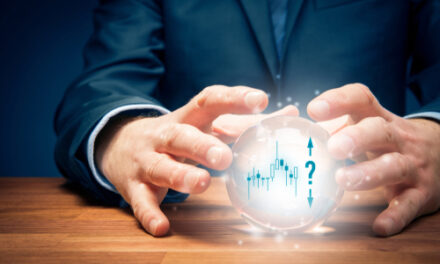 Mike Merson and I have been doing a monthly gab on the crypto markets we call “Crypto Claptrap.”

We call it a “claptrap” because we’re 100% aware we’re just two young guys who happened to make a lot of money with this stuff. We’re not experts.

I bring this up because last week I made a prediction that Shiba Inu (SHIB) would be the next cryptocurrency to be featured on Robinhood.

Robinhood hasn’t added a new cryptocurrency to their platform since dogecoin in 2018. But Robinhood made a lot of money on dogecoin this year — too much to ignore.

In fact, dogecoin accounted for 34% of the company’s crypto revenue in Q1 this year, up from just 4% in the quarter prior.

So I figured the obvious choice for Robinhood would be to add the next dog-themed overnight cryptocurrency sensation, SHIB.

Lo and behold, this week rumors started circulating that, sure enough, Robinhood is looking at adding “SHIB” to its list of coin offerings. SHIB popped about 12% before Robinhood issued its statement. I’ll mention they were careful not to deny it’s true — just that they haven’t announced anything official.

Am I psychic? Did my YouTube video with its entirety of 333 views spark an overnight movement? Is the board of Robinhood reading True Options Masters?

Obviously not. (Well, I won’t count out that last thing.)

But once you understand how I’m able to make predictions like this, you may be able to start doing them on your own — and make a lot of money as a result.

This isn’t the first time I’ve had a prediction come true.

In January, when dogecoin hit a penny, I predicted it would reach a dollar within the year — a 100x return.

I ended up cashing out when it crossed 7 cents because I found a house I really wanted to buy. Two months later, it eclipsed 70 cents. Not a dollar, but pretty close. And as Mike and I covered in Claptrap, the crypto bull run isn’t over yet.

I’ve had a ton of big gains just like this in the past year. I made 2,143% on Moxian, a company that makes work-from-home life easier for small and medium-sized businesses. It was an obvious bet back in October of 2020, when the stock was trading cheaply despite the pandemic’s toll on office work.

I made 515% on online advertising company Marin Software — the cheapest software stock I could find on Robinhood. Again, this felt pretty obvious when the pandemic was further cementing our reliance on software, especially for advertising with everyone locked down.

The reason I’m able to make trades like this is because I’ve developed my own personal philosophy about the stock market.

This philosophy serves as my guiding light, my North Star for every decision that I make…

As I mentioned last week, I didn’t make any money my first three years of trading. It wasn’t until after a lot of mistakes and thousands of trades placed that I finally developed my own personal guidebook.

It’s a list of rules that keeps me calm through losses and helps me lean into opportunities when I see them without elevating my heart rate or batting an eye.

It’s one thing to place a trade, it’s another to know why you are placing it. Whether you pick your own trades or take ours, it’s vitally important for you to understand WHY you trade the way you do.

But you have to determine for yourself what YOU think is happening in the stock market and why.

I love working for Banyan Hill because we have a ton of experts that help me do this without me having to do a bunch of the legwork. And if you’ve read my recent dispatches, you know I don’t like to work that hard.

Murphy’s Law states that if anything can go wrong, it will. This thinking is pervasive in the stock market and leads many people to bet on a bear market that never comes.

I say, if an idea seems obvious… even too obvious… that’s likely where things will end up. Let’s call it Cimorelli’s Law.

Don’t overthink things. Don’t work harder than you need to. Read stuff from people you trust.

Abolish any and all pessimism that leads people to think the world could end tomorrow.

Look for those “obvious” situations that most people aren’t recognizing.

And go make some money.

Chart of the Day:
A Warning Sign
From a Hot Sector 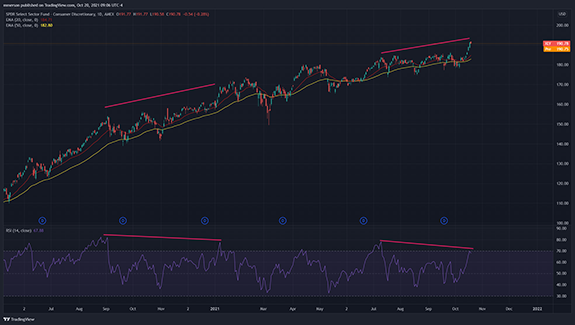 Today we’re bringing it back to basics with a simple chart of the SPDR Select Sector Consumer Discretionary Fund (XLY).

This ETF holds a basket of non-staple consumer stocks. Things that are considered luxury expenses — cars, fast food and coffee, travel, casinos, and so on.

Interest in XLY tends to correspond with a risk-on attitude in the stock market. When this index breaks out, it’s a good sign that the broad market is poised to run higher.

But I’d be remiss not to point out the RSI divergence at the bottom of the chart, though. While XLY has made higher highs, the RSI has made lower highs. The last time that happened, early in 2021, the ETF took a 15% haircut from peak to trough.

I’m not saying a move that extreme will happen this time… That sell-off corresponded with a broad-based risk-off market attitude in February.

Plus, the RSI could potentially run higher in some feverish trading today and invalidate this divergence. But if it cools off, expect some downside in XLY and potentially in the broad stock market in the days and weeks ahead. 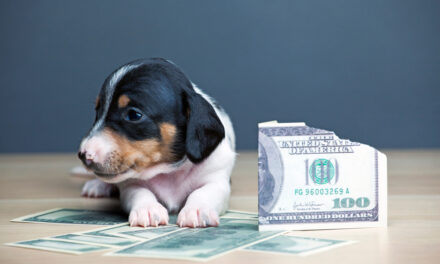 If the Market Won’t Behave … TRADE! 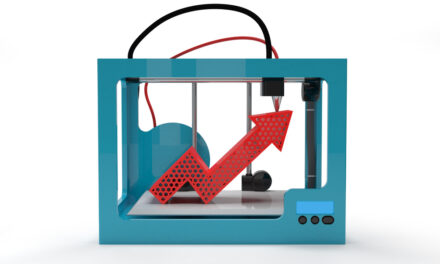