Home » Cryptocurrency » Financial Advisers Are Finally Getting Into Crypto

Financial Advisers Are Finally Getting Into Crypto 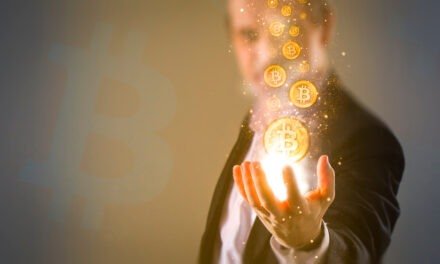 One August morning in 2013, a colleague invited me to attend a breakfast meeting with a group of hedge fund traders, venture capitalists and investment bankers.

This was a group that met regularly with entrepreneurs and inventors who were invited to present ideas to the group, often in the interest of seeking an early-stage investment or some feedback on their idea.

These breakfast meetings were part networking, part Shark Tank, that sometimes led to an angel investment over a bacon, egg and cheese bagel and coffee.

On this particular morning eight years ago, a bitcoin enthusiast named Barry Silbert was there to tell us about a new form of money. One that could potentially rival the dollar as a medium of exchange and gold as a store of value.

At the time, bitcoin was a fringe libertarian movement with a market cap under $1 billion, and only a handful of cryptocurrencies even existed.

What Silbert said that day piqued everyone’s interest: “I have invested nearly all of my net worth into bitcoin, and I believe this is the biggest technological development of our lifetime.”

He wasn’t kidding. Nearly eight years later, with the price of bitcoin recently touching $60,000, Forbes estimates his net worth at $1.6 billion.

The crypto markets have come a long way since that fateful day in 2013.

Banks such as Morgan Stanley and JPMorgan Chase, which once scoffed at cryptocurrencies, are now selling crypto research and investment products to institutional clients.

Corporations such as MicroStrategy and Tesla are replacing their U.S. dollar holdings with bitcoin.

And fintech mobile apps such as Square and PayPal are making it easy to buy and sell bitcoin and Ethereum.

With the Coinbase initial public offering this week expected to arrive with a $100 billion valuation, it’s easy to think that cryptocurrencies have finally gone mainstream.

But that’s not the case, according to a recent survey of financial advisers by Bitwise Asset Management…

Most Financial Professionals Don’t Own Crypto

In December 2020, crypto asset manager Bitwise conducted a survey to determine whether or not financial advisers are steering their clients toward cryptocurrencies.

These advisers included independent registered financial advisers, broker-dealers and financial planners. They’re the professionals that most investors turn to for financial advice.

The first question, “Do you own crypto in your personal portfolio?” indicated where this whole survey was headed. Less than 25% of advisers owned cryptocurrencies themselves. 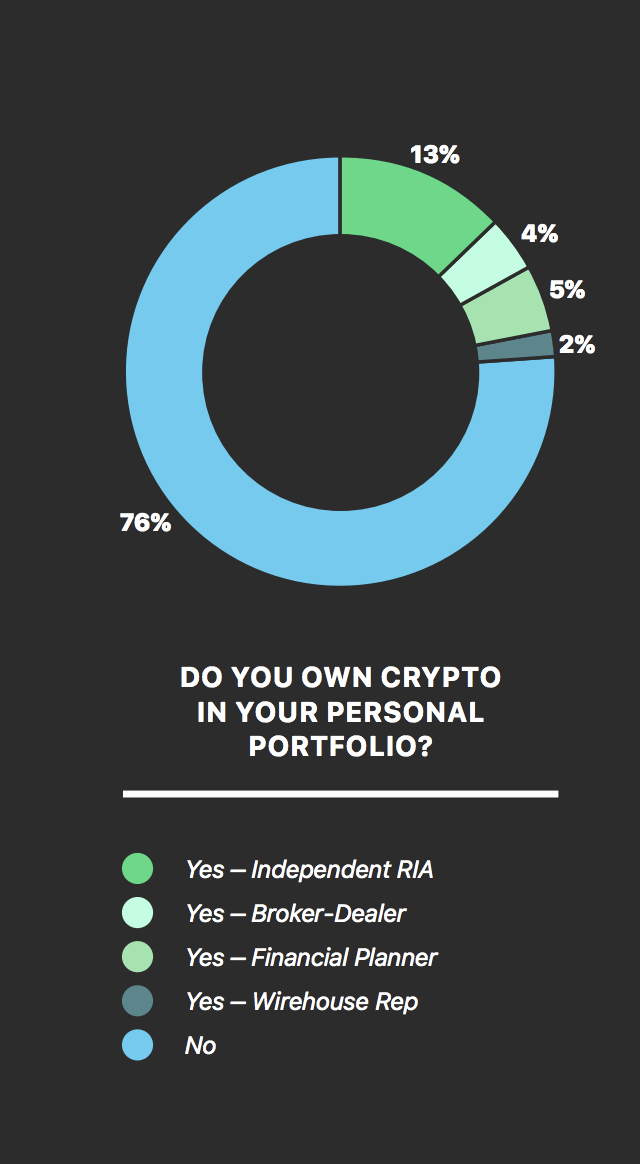 Now keep in mind, these are the professionals responsible for exploring and introducing new investment opportunities to clients.

And the overwhelming majority of them haven’t gotten around to buying any crypto for themselves.

Here’s another one: “What percent of clients asked about crypto in the past 12 months?” 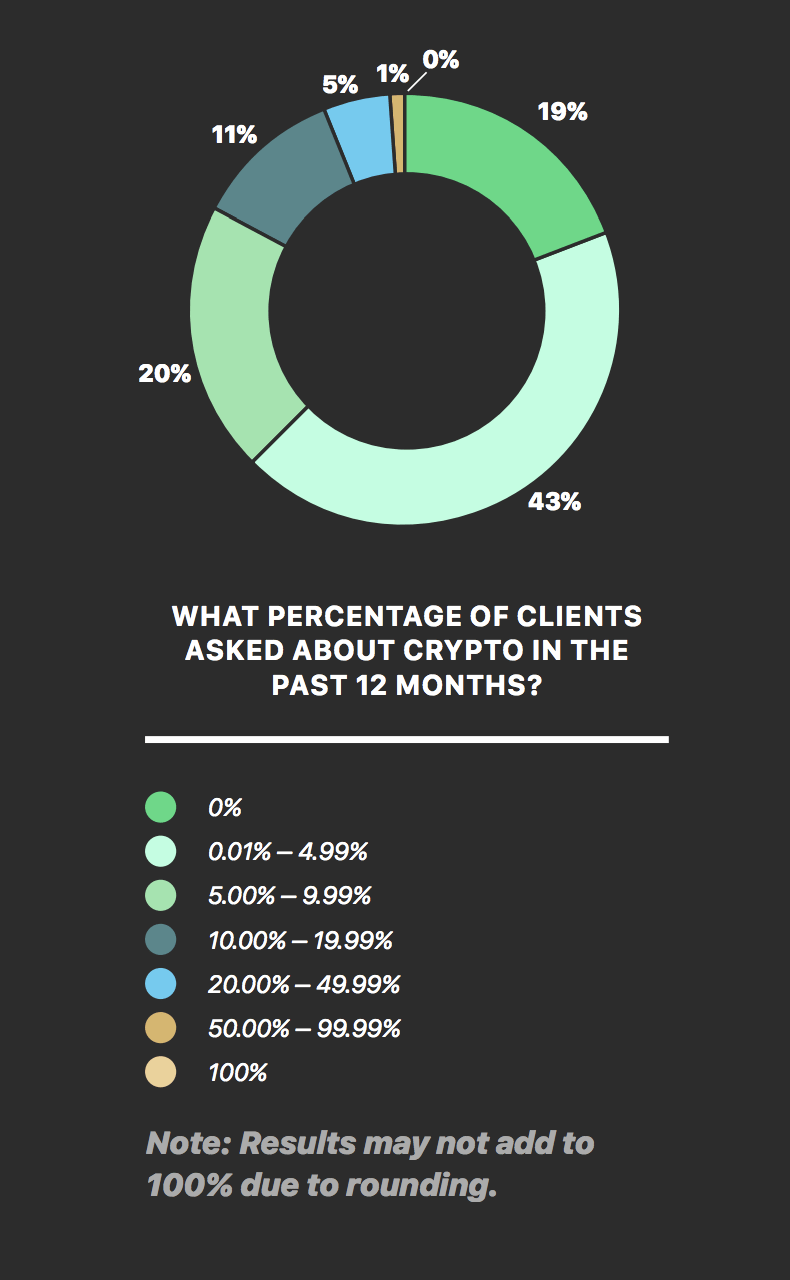 Almost half of financial advisers reported that only 0% to 5% of clients have even asked about crypto in the past 12 months.

Here’s the real kicker. When asked, “Do you currently allocate to crypto in client accounts?” 91% of advisers said “No.” 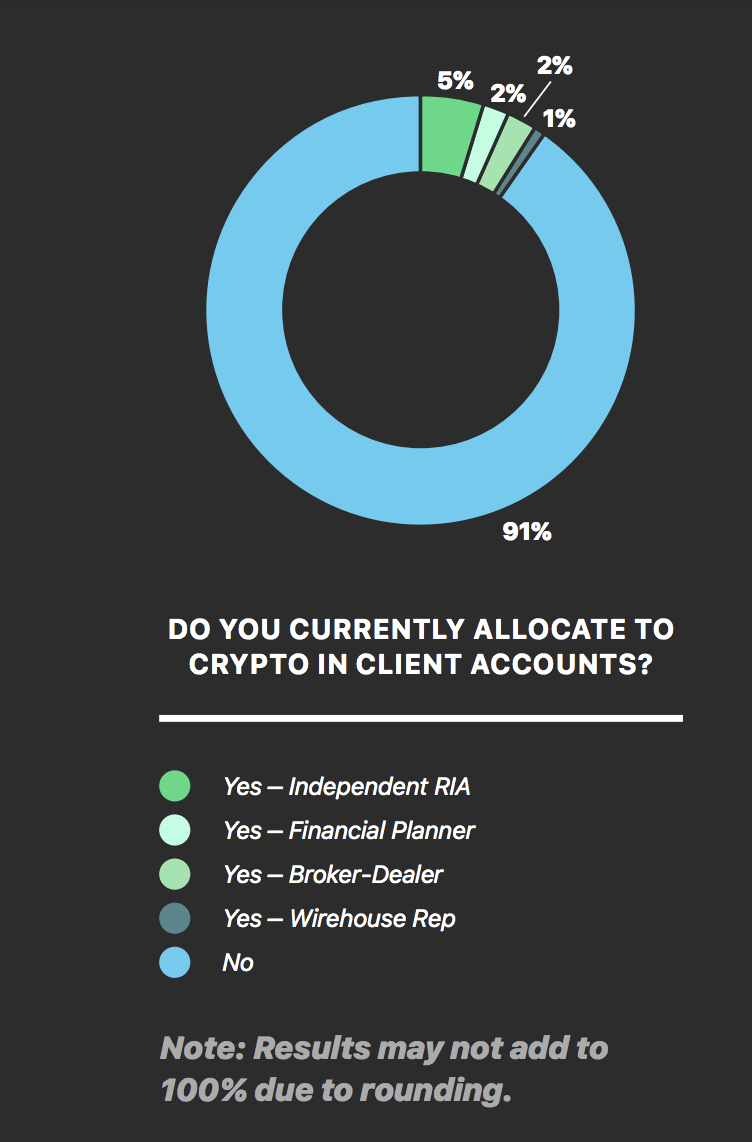 In other words, most financial professionals don’t own cryptocurrency, their clients haven’t really been asking about it and, therefore, they haven’t allocated cryptocurrency to portfolios.

But that is likely to change this year.

Of those that weren’t currently allocating, 17% said they were either “definitely” or “probably” going to allocate to crypto in 2021. 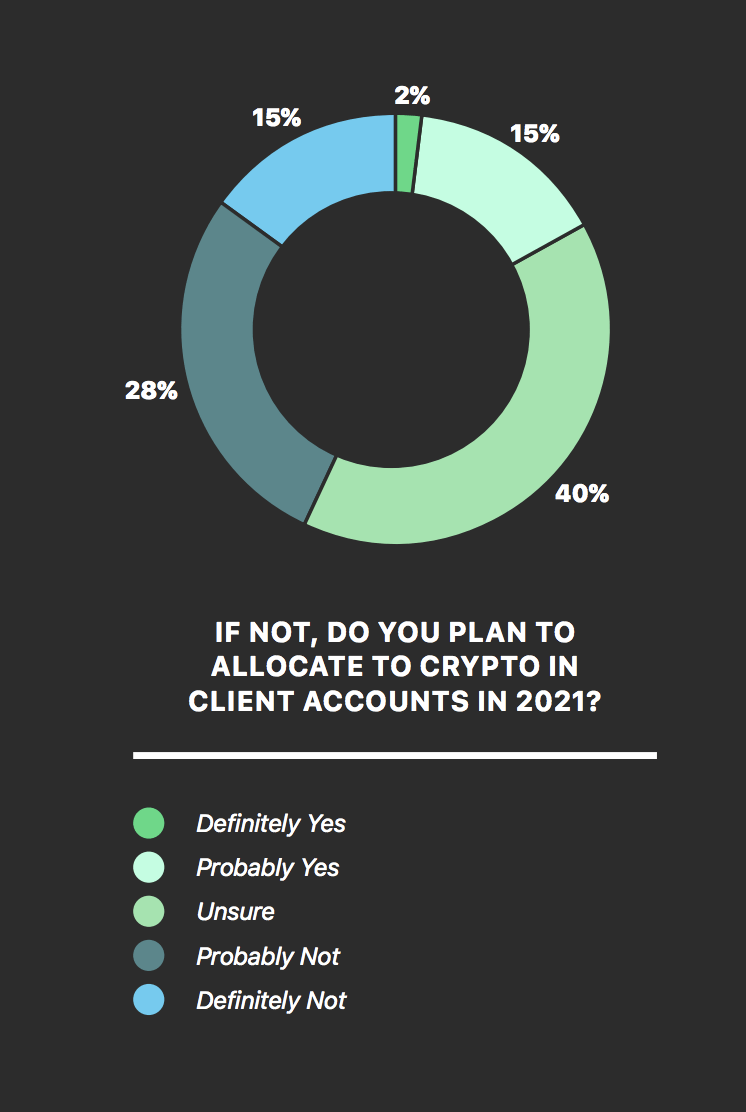 It’s important to note that this survey was done late last year. Since then, bitcoin has doubled, and Ethereum has almost tripled.

This is just another sign that mainstream adoption hasn’t happened yet but is well underway.

And Barry Silbert’s breakfast premonition is unfolding exactly as he predicted eight years ago. 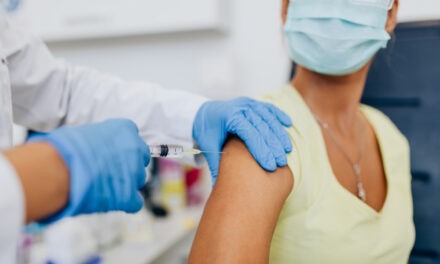