2 Key Events That Could Send Oil Prices Higher in 2019

Imagine for a second that the price you pay at the pump was steady and predictable. Week after week, you fill up your tank, and the price never changes. Never a surprise hit to your wallet.

As nice as that imaginary world sounds, it will never happen.

The price of oil is cyclical. It’s proven that fact over 150 years of price swings.

That was John Kemp’s message at the Energy Information Administration conference this past June. Kemp is a seasoned energy analyst for Reuters.

Take a look at the chart he presented: 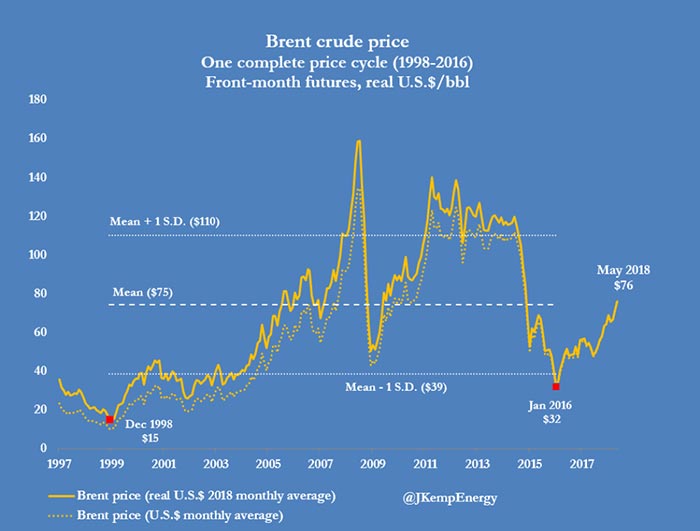 The average price of oil during that cycle was $75. That’s pretty close to where we are at now.

That leads me to imagine for a moment if the stars might align and keep the price of oil around its recent historical average. More or less in balance.

There are events on the horizon that could send the price of oil ripping higher. Here’s how they play out:

Washington wants to keep oil prices lower. The problem is that U.S. producers are already maxed out on pipeline capacity.

The U.S. can open up its strategic petroleum reserves with a capacity of over 700 million barrels. That’s over 70 days’ worth of U.S. oil production!

It can also deliver on exemptions to oil producers in Iran, allowing for oil to continue flowing out of the nation. That could restore millions of barrels of oil per day that investors thought would dry up due to sanctions on Iran.

Either action would send oil lower and stall plans to increase oil production from major producers. That means once these Band-Aids come off, the price of oil will rip higher.

If Washington does nothing, we are likely to see a steady but slow climb in oil prices. Growing demand will outpace supply over the next year.

That means higher prices well into 2019.

Higher prices will drive investments into production that can take years to reach the market. Once this new supply hits the market, we will see prices ease lower.

In either scenario, higher oil prices will come. There is no such thing as a quick fix when it comes to natural resources.

Consider beginning to build a position in oil. A great way to gain exposure to the oil sector is through the Energy Select Sector SPDR ETF (NYSE: XLE). This exchange-traded fund tracks major oil producers and service providers.

Continue adding to that position when oil dips on news of short-term supply increases. Once the market prices in higher oil as a sure thing, you’ll want to have skin in the game.

The Most Important Number to Look at This Earnings Season