It quickly recovered most of those losses, but many individual investors were severely affected when they exited the market in a panic on the way down. 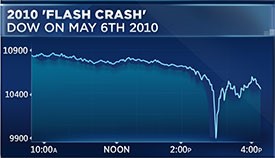 The “Flash Crash” is the second-largest point swing (1,010.14 points) and the largest one-day point decline (998.5 points) on an intraday basis in the DJIA’s history.

Although experts still disagree about the detailed cause of the Flash Crash, most fingers point to a toxic interaction of high-frequency and algorithmic trading systems. Over the next 18 months, regulators and stock markets introduced rules meant to prevent a recurrence.

We haven’t seen another techno-crash of this magnitude since … but that doesn’t mean artificial price movements don’t happen anymore.

They do. Can you spot them when they occur?

Ghost Out of the Machine

HTS rarely accumulate substantial positions. Instead, their goal is to profit by arbitraging tiny price differences at huge scale. On any given day, more than 75% of the stock shares traded on U.S. exchanges originate from such HTS.

A Securities and Exchange Commission post-mortem called this cascade of selling “hot potato trading,” as high-frequency firms rapidly acquired and then liquidated positions among themselves at steadily declining prices.

Trading was supposed to stabilize at a market-clearing price, but because of the unusual size of the initial trade and its ripple effects, many HTS triggered internal rules intended to prevent overexposure to single products and stopped trading altogether. That led to a lack of liquidity … which caused even more rapid price declines as orders dried up.

The turmoil then spilled over into equities markets, as HTS there paused trading automatically as they detected the sharp rise in buying and selling in the futures market. The resulting lack of liquidity caused shares of some prominent companies to trade as low as a penny, or as high as $100,000.

The HTS did this accidentally in 2010. Their internal rules reacted to a single large trade by issuing high-frequency test trades that snowballed into a market-wide crash. “Real” traders mistook this higher trading volume for liquidity and joined the automated sell-off. But since the underlying price movement was false, competition for liquidity ended up dramatically amplifying downward price pressure.

This unintended consequence of HTS has supposedly been solved by stop-trading rules designed to activate when a share moves too far in a specific direction in a specific period.

Large traders sometimes place non-bona fide orders (which are canceled before they can be filled) to bait other market participants into reacting. With such bad-faith orders, so-called “spoofers” deliberately seek to create false pessimism or optimism.

For example, they may try to induce other market participants to lower their asking prices by creating the illusion of selling pressure as false sell orders enter the system. The spoofer places sequential sell orders at successively lower prices, driving down the best ask price.

After the price has fallen sufficiently, the spoofer makes a real trade, buying the stock at the lower price and canceling all the sell orders.

He wins. The losers are traders induced into selling at artificially low prices.

Genius Comes in Many Forms

I always feel a sense of admiration and awe at the intelligence applied to making money through such subterfuge.

Then I come back to reality. I remember that the “money” thus finagled out of our complex financial market systems doesn’t represent any real economic activity. It’s just ones and zeros in a bank account that will be used for further useless, market-distorting speculation.

No goods or services … no jobs … no real wealth.

But then I remember that guys like my colleagues Paul , Matt Badiali, Chad Shoop and Michael Carr could be using their smarts to do these things … but they’re not.

Instead, they’re applying their minds to generating honest returns based on real economic value that benefits everyone. Their track records easily beat those of the big automated traders because they actually accumulate positions … they don’t just arbitrage microscopic price differentials at a massive scale.

So, next time you consider investing with one of the big players, reconsider. There’s a better way … and it’s right here at Banyan Hill.

P.S. I’m sure you remember what October of 2008 was like. Stocks were dropping nearly every day, and the Dow had shed roughly 25% in just one year. However, Paul chose to stick with his True Momentum strategy and went all-in on a handful of stocks … and he tripled his wealth. Since then, this strategy has allowed Paul to pull triple-digit winners out of the market every year without fail. Click here to learn how Paul’s True Momentum strategy helps him deliver massive growth quickly.

This Indicator Tells Us Something Other Investors Don’t Know