The popularity of diesel cars spiked with the promise of clean emissions. That was until 2015, when Volkswagen admitted to lying about its diesel cars’ emissions.

So they cheated. They built sophisticated software designed to put the cars “to sleep” when testing. That lowered the emissions to acceptable limits … but only during the tests.

Since then, the reputation and popularity of diesel cars fell. In the U.S., automakers pulled diesel cars off lots. Western Europe once sold more diesel cars than gasoline cars … but no longer. 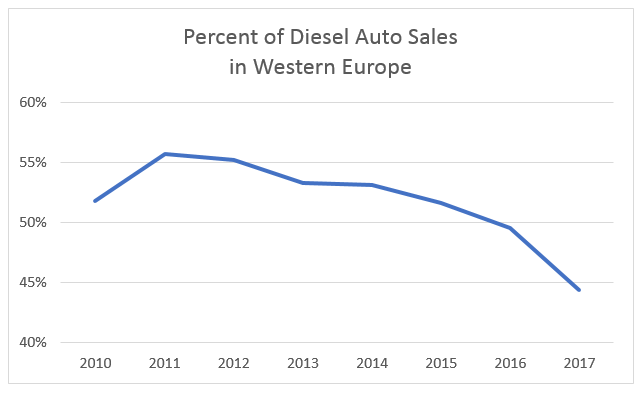 Analysts from JPMorgan Chase predict that diesel sales in Europe could fall to 30% of total car sales by 2020.

Diesel’s dirty reputation is likely to be a stiff headwind for platinum prices. And the analysts at the giant Prospectors & Developers Association of Canada mining conference confirmed that.

The three-to-five-year price forecast was not bullish. The average price was around $1,010 per ounce.

That’s only about 7% above the current price …

A Pure Play in the Shale Oil Boom